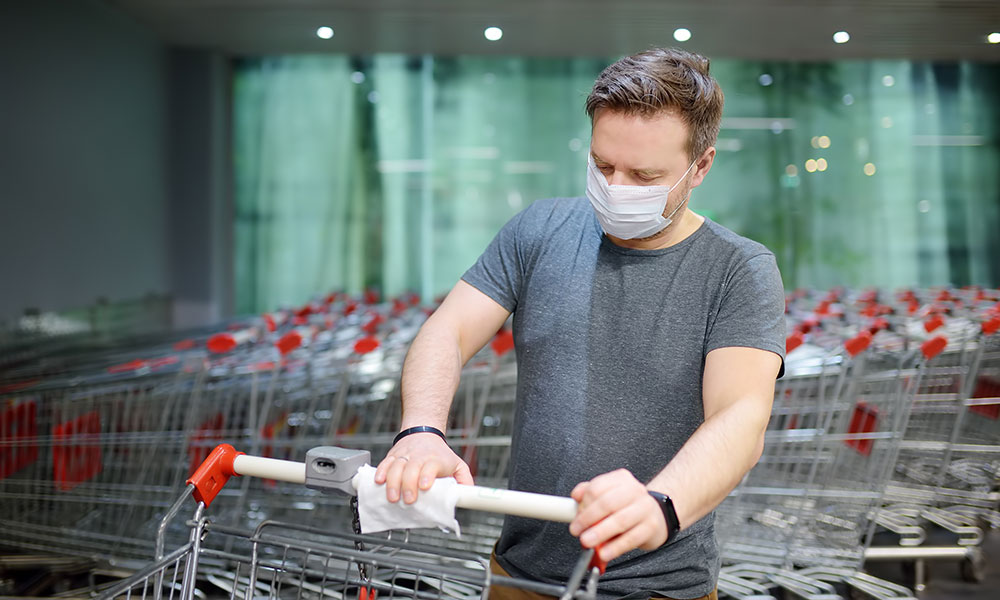 Signs began popping up months ago after the Centers for Disease Control and Prevention recommended that Americans wear face masks in public to limit the spread of the coronavirus.  Gov. Andrew Cuomo issued an executive order requiring a mask or a face covering in public and in situations where social distancing isn’t possible.

But the governor’s mask order became a flashpoint, sending a public health issue headlong into a polarizing political debate. Enforcement has mostly fallen to businesses and their employees — who often lack training to handle potentially volatile situations. They have found themselves on the receiving end of verbal attacks and even violence from angry customers.

“I would have to say 99.9% of our customers understand and they want to help,” says Cheryl Barsom, owner of Barado’s on the Water in Central Square. “It’s just a small percent that makes it difficult, that makes our blood pressure rise and our anxiety go through the roof.”

The state’s mask order dictates patrons wear a mask in restaurants unless seated. Barsom reopened the restaurant’s partially enclosed outdoor patio, but not its indoor dining room. Some customers assume they don’t need a mask outside, but Barsom says the staff has been diligent about politely reminding people they do in fact need to wear a mask unless seated.

Guests have occasionally gotten angry and stormed off when informed of the mask rule, but Barsom says she doesn’t mind.

“I would have to say 99.9% of our customers understand [they need to wear masks] and they want to help. It’s just a small percent that makes it difficult, that makes our blood pressure rise and our anxiety go through the roof.”

Cheryl Barsom, owner of Barado’s on the Water in Central Square.

A more serious situation occurred recently when Barsom’s husband stepped in front of a customer at the restaurant who wasn’t wearing a mask and informed him of the rule.

“He said, ‘Sir you need a mask to be walking around,’” Barsom says. “And he literally took his hands and shoved him out of the way and said ‘Get out of my face.’”

Barsom says the man, apparently realizing he was in the wrong, retreated to his boat and left.

Resistance to putting on a mask

Physical confrontations between employees and customers have been popping up across the country. At a California McDonald’s a man attacked an employee who asked him to put on a mask. In Pennsylvania, a man refusing to wear a mask repeatedly punched a convenience store cashier when she told him he could not buy a pack of cigars.

And a store security guard at a Michigan Family Dollar was fatally shot after insisting that a patron put on a mask.

Although the vast majority of confrontations never get physical, business owners in Central New York have reported customers expressing resistance to putting on a mask.

In July, a woman lashed out at teenagers working at a Madison County ice cream stand when she was denied service after refusing to wear a mask. In an incident that drew statewide attention, the woman was caught on surveillance camera screaming at the teenagers.

When the employees closed the counter window, the woman became angrier, running toward the stand and yanking the window open to lean in and continue yelling at them. The owner supported her employees, saying they did nothing wrong. Lt. Governor Kathy Hochul later visited the ice cream stand to thank the teenage employees for their efforts.

Many businesses have taken extra steps to let customers know that masks are required. Supermarket chain Wegmans launched an aggressive campaign at each of its stores, including enhanced store signage at entrances and in store announcements reminding customers of the importance of wearing a mask. Stores are also offering masks to customers who may have forgotten to bring one.

Wegmans hasn’t taken the step of refusing entrance to customers who don’t comply with the mask rule. The Rochester-based chain has seen about 99% compliance at its stores, Marcie Rivera, a company spokeswoman, says.

“We’re going to obviously ask customers to follow the mandate,” Rivera says. “We’re doing everything to educate our customers as much as possible.”

The New York State Police has similarly focused on educating the public about the mask requirement and encouraging compliance.

“We haven’t had any issues with people failing to comply,” says Beau Duffy, speaking for the troopers. But if someone isn’t following the law and the situation is getting out of hand, he says the public is encouraged to call their local police or 911.

John Dony, director of the Campbell Institute at the National Safety Council, says that to help protect employees and customers from contracting COVID-19 employers should instruct staff to politely ask customers not wearing a mask to put one on. Anyone who refuses and doesn’t have a legitimate reason — such as a related health condition — should be asked to leave.

But employees shouldn’t be left to figure out how to handle these interactions on their own, Dony says. Employers should provide training on how to de-escalate tense situations.

“Having a plan in place will help protect employees and customers from what could develop during a potentially hostile situation,” he says.

The proper training and response in a hostile situation can mean the difference between compliance and violence, according to Chauncey Bennett, a retired police lieutenant and trainer who teaches a civilian course called “Dealing with Difficult People.”

Bennett, who served as a University Police officer at SUNY Cortland, says employees should absolutely avoid a physical confrontation and leave those situations to security or police.

“You want to walk away before there is a physical confrontation and then all you really do is keep the person under observation until help arrives,” Bennett says.

The goal of de-escalation techniques, of course, is to keep the situation from getting out of hand.

The key is not letting someone’s inflammatory words and actions affect you. It’s also important not to tell the person to calm down. That’s a common mistake that Bennett says is usually guaranteed to have the opposite effect on an agitated person.

The focus should be on doing everything possible through words and body language to calm the situation down. Avoid taking a hostile stance or closing your palms into fists, Bennet says. Also acknowledge their feelings and try to say things that are empathetic.

“I understand where you’re coming from, but whether I agree with you or not, it is our store policy,” Bennett suggests as a response. “And we want to have you in the store shopping, but that requires that you have a mask on.”

Another useful tool can be offering masks to customers who don’t have them on.

“Usually someone might not be happy but they’ll say fine and take the mask,” Bennett says. “Let them say what they want as long as they do what you want.”

Training for staff might lead to fewer ugly verbal fights, but it probably won’t be enough by itself to convince everyone to wear a mask. That’s because there are many factors that contribute to refusal to wear a mask.

Resistance to masks may fade away

“Just telling people that masks are an effective way to limit the spread of the coronavirus isn’t sufficient to change everyone’s behavior because we’re not just responding to facts,” says Gretchen Chapman, a psychology professor at Carnegie Mellon University.

Social norms and identity are important factors in determining behaviors. We look to other people for clues to how to behave, so we’re more likely to wear a mask if our friends, neighbors and co-workers are all wearing masks, Chapman says.

Our behavior also signals key characteristics of ourselves that are important to our identity. And many COVID-related behaviors have become litmus tests for political identity, Chapman says.

“So wearing a mask kind of labels you as a liberal and refusing to wear a mask in some sense labels you as a good conservative standing up for personal liberties,” she says. “People can respond to the requirement of wearing a mask not out of how is this going to affect my risk or of others but what does this say about me and who I am and the identity group I affiliate with?”

It’s also possible to make certain behaviors, such as wearing a mask, part of someone’s identity, Chapman says. For example, if celebrities or political leaders someone admires support wearing a mask, that could encourage them to follow suit. President Donald Trump recently began wearing a mask in public after months of resistance.

Another possibility is giving people the ability to express their identity through customized face masks, Chapman says. Such masks have become more popular over time.

Resistance to wearing a mask may ultimately fade away as more states make the practice mandatory and wearing a mask becomes more normal, says Chapman. She cited seat belts as an example of a safety measure that initially met resistance as an infringement of personal liberties, but is now commonplace.

Barsom, the restaurant owner, agreed, saying she had already noticed a change in how people respond to being required to wear a mask.

“I think people are getting kind of used to it to be honest with you.”

Phrases to Avoid in a Tense Situation

• “Because those are the rules” (Remember Mom and Dad?)

• “What do you want me to do about it?” (This implies you do not know your job)

• “Come here” (Or any other order to tell a person you want to speak with them. It’s about how you say it)

• “I know just how you feel!” (You probably have no idea)

• “Because I said so!” (That trick never works)

• “Really? Really? (Sounding like you’re looking for a confrontation)

• “Calm Down!” (Does anyone really calm down when told to?)