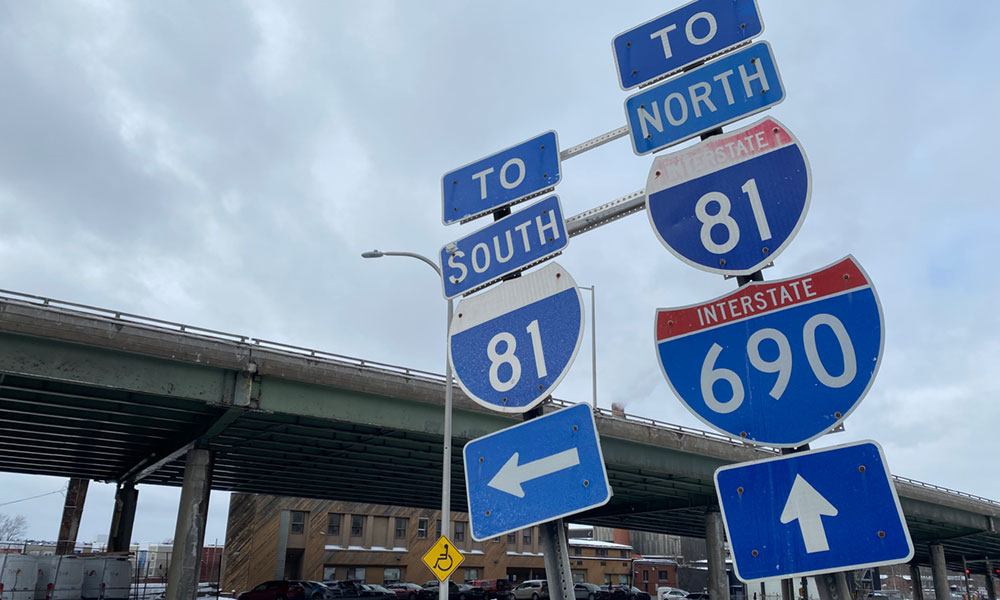 Gov. Cuomo said that the redesign project of I-81 in Syracuse will break ground in 2022. It will encompass the redesign and or replacement of 50 bridges and cost somewhere in the range of $1.9 billion.

New commitments from high-ranking government officials are raising hopes that the long-awaited I-81 viaduct construction project will finally move into the fast lane.

The 1.4-mile elevated stretch of Interstate-81 that cuts through downtown Syracuse dates back decades and in 2017 officially reached the end of its “useful life,” ramping up the pressure to replace it. Now, travelers know when that will get underway.

“In Central New York, we will transform the obsolete and poorly designed I-81 viaduct in Syracuse into a modern transportation corridor,” Gov. Andrew Cuomo said in one of his recent State of the State addresses. “We are conducting environmental and public reviews this year and we will break ground in 2022.”

The news was enthusiastically greeted by local officials like Syracuse-area State Sen. Rachel May, who said it is “immensely gratifying” to see some movement on the project. But it’s not just Cuomo’s pledge that people find encouraging. Incoming U.S. Transportation Secretary Pete Buttigieg also made recent remarks that give some reason to believe I-81 could be a federal priority as well.

On Dec. 20, the former South Bend, Indiana, mayor Tweeted, “Black and brown neighborhoods have been disproportionately divided by highway projects or left isolated by the lack of adequate transit and transportation resources. In the Biden-Harris administration, we will make righting these wrongs an imperative.”

There’s good reason to believe I-81 falls into that category. When the interstate was built, it cut through the city’s 15th ward, a largely black neighborhood. A report by the New York Civil Liberties Union documented the consequences of that decision: more than 1,300 residents in that section of the city were displaced and due to discriminatory practices and policies of the time, those who were uprooted struggled to find housing away from the neighborhoods surrounding the viaduct. Long-term exposure to that traffic has proven harmful for residents in proximity to the highway, especially among the city’s minority population. Asthma rates and lead poisoning rates from lead-based fuels are higher among black than white residents in Syracuse according to the report.

State and local officials leading the effort to redesign I-81 hope to correct these grave errors by replacing the elevated portion of the interstate with a community grid. It would be a street-level, multi-lane pathway through the area that could direct more traffic into the city and its businesses rather than ferrying cars past them like the interstate does now. New York Sen. Charles Schumer, the new Senate majority leader, said he is not only planning to use all of his clout to get the job done, he has already mentioned the project to the incoming transportation secretary before Buttigieg was even confirmed.

“I specifically raised I-81 and told him it’s one of my top priorities for New York state,” Schumer said. “We agreed that projects like I-81 are an opportunity to make much needed improvements for our country’s infrastructure, rebuild local communities and create economic opportunity.”

The effort to replace I-81 has thus far been slow-moving and the pandemic hasn’t helped.

The reasoning could be the sheer magnitude of what’s involved. I-81 project director Mark Frechette said it will encompass the redesign and or replacement of 50 bridges, affect three interstates, and cost somewhere in the range of $1.9 billion. That will make it one of the largest projects New York’s Department of Transportation has ever undertaken, according to Frechette.

Despite the challenges, Syracuse Councilor Khalid Bey is now optimistic. He says the support of national figures could be exactly what Syracuse needs to get the ball rolling.

“Federal support for this critical project will help move past the series of delays we have faced,” Bey said in a statement. “I am thrilled that this project is getting the national attention it needs. I look forward to working with state and federal officials to get this essential project in motion, a key piece for the safety and prosperity that Syracuse deserves.”

The I-81 project is currently under review by the Federal Highway Administration.