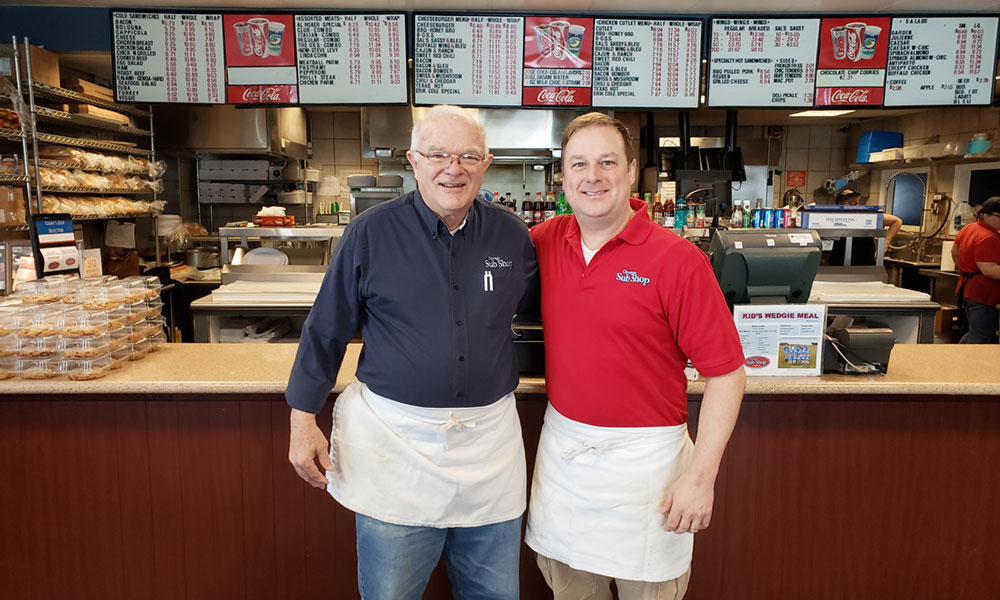 Running the show at Oswego Sub Shop in Oswego: Bill Greene Sr. and Jr. They’re the owners of the sub shop

The Oswego Sub Shop recently entered its 51-first year in operation, and owner Bill Greene Jr. said that stable, consistent quality is still the foundation of his business.

The sub shop has always been a family affair, stretching back three generations. It was started by Bill Greene Sr.’s father, affectionately known as “Pops” to staff members, in partnership with his daughter and son-in-law. He had run a sub shop in Brockport for a few years, before opening the Oswego Sub Shop in 1969.

At the time, Bill Sr. worked at Lincoln Rochester Trust Company, after returning from the Vietnam War in 1967. He said that every week he talked with his father, he heard about how well the Oswego location was doing, how much business was growing every week, and that was what made him decide to move to Oswego.

“It just kept growing and growing,” Bill Sr. said. “That’s the reason I moved here, because I was skeptical when they first planned the Oswego shop. When I saw how well it was working, I knew I wanted to move here and help out.”

Tensions arose between the family early on though, and Bill Sr. bought his father’s part of the business in 1970, and shortly after bought the rest from his brother-in-law.

Bill Jr. took over the shop in 2002, but he had been involved in management since 1994. He has worked at the shop since he was a teenager, cleaning on weekends, then delivering and working the counter as he got older and more capable.

Around the same time, Bill Jr. stepped into a more advanced role at the sub shop and opened Greene’s Ale House across the street, which he owned and operated until 2002.

Both men have committed themselves to keeping the Oswego Sub Shop consistent, and live by the rule that “If you bought a sub in 1969, you can get the exact same sub today.” Not only is the recipe the same, but it is made with fresh ingredients.

“We slice our meats every day, we dice and chop our vegetables every day, it’s all done daily,” Bill Jr. said. “There is a lot of labor involved in that, and we feel that that’s what keeps us ahead of our competitors.”

In order to meet demand and keep up with the workload that fresh-prepared ingredients requires, the shop has hired a staff of over 40 people, many of them working full time.

While the sandwiches may be the same, there have been many changes to the shop since Bill Sr. ran it nearly 20 years ago. Over the last 12 years, the shop has grown in footprint as more space has been required.

In 2008, Bill Jr. expanded the shop with a bakery and ample storage space in the basement, after growing dissatisfied with the company they were buying their bread from.

“We used to buy from New York Bakery,” Bill Jr. said. “They were talking about cutting deliveries again and again, and it would have meant three days a week without fresh bread. That’s a very important part of our subs, so we decided to take that into our own hands. Now, every day at 5 a.m. my bakers come in to bake bread fresh for the day.”

With the expansion of the building came an expansion of the menu. Before Bill Jr., the shop served 10 varieties of subs. Now, just the cheeseburger sub, which used to be one menu item, has 15 sub-options, warranting its own space on the classic-style menu board above the counter. There are 15 similar options for the chicken cutlet sub, as well as a wider selection of sandwiches, wings, fries and even baked goods.

All that food, all that business and all that staff calls for high spending on wages, and Bill Jr. says that the current trend of yearly minimum wage increases has forced him to raise prices on the end product.

“I think the major issue we’ve had in recent years has been the consistent, yearly minimum wage increases,” Bill Jr. said. “It has a huge effect on us, as I mentioned we are labor-intensive, which calls for a lot of man-hours, and it has been a struggle to keep up with these increases.”

The future looks bright for the shop, however. The shop has gained historical significance to many Oswegonians, and with that significance has come loyalty.

Bill Sr. remembers the story of a soldier stationed in Alaska, about to deploy to Afghanistan, calling and ordering four cheeseburger subs, to be overnighted to him on the Pacific coast.

“It ended up costing him $150, but if someone calls and asks and is willing to pay the price, we’ll take care of it,” Bill Sr. said.

“I’ve actually got one right now, I have to send a few cheeseburger subs out to Buffalo overnight this week,” Bill Jr. added.

For the future, the plan is to add online ordering when possible, to improve and expand their delivery services.

“We’ve got a great business here, we have an incredible product and we’re good at what we do,” Bill Sr. said. “The future is looking good.”