Lt. Matthew Malinowski remembers angling for a job with the Syracuse Police Department a little over a decade ago when 800 people took the entrance exam to fill just 30 openings.

The department used to have as many as 2,000 people take the exam.

“Back then you had to really fight for the position,” he said. “But now it’s much different.”

Police departments throughout Central New York are confronting severe challenges in recruiting as they attempt to replenish their depleted ranks and are frequently adopting new strategies to attract officers.

Because police officers can retire after 20 years, most departments need a steady flow of recruits to maintain staffing levels. It typically takes up to a year for new hires to complete all the required training and be working independently.

In Syracuse the flow of recruits has slowed to a trickle. The department had at least 40 openings to fill, but after physical tests, medical exams and background checks it was only able to hire four people for its academy class.

The Onondaga County Sheriff’s Office is dealing with staffing shortages across the entire agency, including the police department and its custody and correction departments, which oversee the county jail, said Sgt. Jon Seeber.

“We’re doing more with less at this point,” he said.

The sheriff’s office is lacking about 20 deputies on patrol and 30 deputies in custody and correction, Seeber said, and the agency has struggled to maintain minimum staffing levels.

In the past 400-500 people might have taken the county’s civil service exam. More recently the number has been closer to 100 for the police exam and just 30 for the last custody and correction exam. After all the tests and a background check, the most recent police academy started with only 20 recruits, Seeber said. And a few people usually quit before completing training.

The struggle to recruit police officers is not limited to Central New York.

Agencies around the country have faced similar challenges. Even the New York State Police, which has long had a seemingly endless supply of applicants thanks to its statewide reach and high starting salary — $58,443 during academy training, increasing to $82,677 after one year — has felt the strain.

“We’re no different than any other police agency in terms of the challenges,” said Beau Duffy, a spokesman for the troopers. “Certainly, young people have a lot of career choices and so there’s a lot of competition to begin with.”

The staffing issue has many causes. A steady exodus of officers has increased the number of open positions.

Historically low unemployment has left many industries hurting for workers and a competitive job market is luring away talent from law enforcement. The military has similarly struggled with recruiting and retention; 19% of police officers nationwide are veterans, far greater than the population at large.

“It used to be considered a blue-collar job where just anybody could do it,” she said. “But now it’s a profession and we are demanding and requiring that police candidates meet certain levels of professionalism.”

The pandemic made it harder for departments to recruit in person. And a portion of applicants also struggle to meet the physical requirements, Brand said.

“I tell my students who are interested in careers in law enforcement to start working out now,” she said.

Several police officials pointed to a portrayal in recent years of law enforcement in a negative light as a significant factor in recruiting challenges.

“It’s not as noble a profession as it was once looked upon by the community,” said Oswego County Undersheriff John Toomey, noting that when he entered law enforcement in the 1980s it was a widely respected and desirable career. “Unfortunately, with the current atmosphere toward policing it’s not looked at the same so we don’t have as many people take the test.”

An ongoing national reckoning over the role of policing has been divisive, becoming a polarizing political issue, fueling mass protests and jumpstarting reform efforts which have drawn varying degrees of support and outrage from police critics and law enforcement.

In 2020, protests erupted nationwide when George Floyd was killed while in Minneapolis police custody. Other high-profile civilian deaths at the hands of police have roiled the national conversation on policing.

Malinowski said an anti-police movement has painted law enforcement in a very negative light and with a broad brush. An incident that occurs hundreds or even thousands of miles away can go viral on social media and unfairly hurt the image of police here in Central New York, he said.

“So that had a real effect to the point where people just don’t even want to be police officers and that becomes our challenge,” he said. 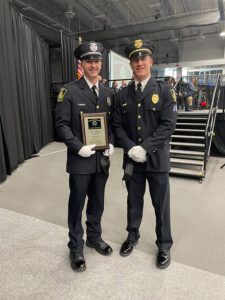 Law enforcement has long faced more scrutiny than other professions, Brand said, but changes in technology have helped amplify it.

“And with the advent of social media and cell phones they get a lot of scrutiny and a lot of attention when they screw up, but a lot of times they don’t get the recognition when they do something good,” she said.

As competition for officers has increased, departments have become more aggressive in their recruiting efforts.

Simonsen advises students applying for jobs in law enforcement and organizes career fairs. She said because of the NYPD’s meager starting salary – $42,500 – departments from around the country visit to recruit. A growing trend is for departments to offer their written and physical exams, as well as job interviews, on site on the same day.

“They are trying to be more accessible,” she said. “They’re trying to streamline the hiring process.”

That’s a strategy the sheriff’s office in Onondaga County has adopted, Seeber said. The county waived the $30 fee to take the civil service exam to encourage people to sign up. And the sheriff’s office purchased iPads for events so potential applicants could sign up for exam notifications on the spot.

“Normally we’d have to tell them to go home and sign up for the test notification,” Seeber said.

Deputies also switched to casual attire, wearing department-issued polo shirts when recruiting instead of their full uniforms and equipment in an effort to appear less intimidating and more approachable to potential applicants.

The sheriff’s office ran a recruitment campaign using social media, radio ads and billboards, and offers tours of the jail and a ride along program. But Seeber said deputies don’t spend much time talking about the starting salary — $55,668 — or opportunities in the sheriff’s office. Instead, much of their time is spent just getting people to take the first step in the hiring process.

“Our toughest thing right now is not about us selling somebody on working for us, it’s about coming to take the test” he said. “We have to know you can pass the test and that you’re interested in the job.”

Deputy Chief Zachary Misztal, of the Oswego Police Department, said that while hiring has remained challenging, with fewer people taking the police exams, Oswego police have managed to avoid the severe staffing shortages plaguing other departments by hiring as positions open up and by offering a competitive pay scale. The department’s starting salary of $61,368 increases in five years to a base pay of $80,739.

He said the department also emphasizes in its recruiting that Oswego is a good place to live and that the community is supportive of law enforcement.

Syracuse police are seeking to entice potential recruits with a $5,000 signing bonus in addition to the $56,490 starting salary. The department hired a public relations firm to help it improve its image. Its social media pages regularly show professional photos and videos of officers interacting with the community.

Malinowski said the department has tried to be more creative in its efforts to recruit a diverse staff, particularly because of the difficulty of recruiting in neighborhoods that may be overpoliced as a result of crime.

Earlier this year the city started a Junior Cadet Program to help residents gain training and work experience that will assist them in pursuing a law enforcement career. The 50-week program includes 20 hours a week of classroom instruction and physical training and as well as 20 hours a week of paid work experience throughout the police department. Upon completion recruits are eligible for full-time civilian jobs until they get accepted into the police academy.

The pandemic forced the state police to cancel several academy classes. Its staffing level, which is around 5,000 troopers, dropped by several hundred troopers as a result.

The agency’s entrance exam, which is given every four years, was made available through a computerized testing process for the first time in 2022. In the past, candidates were required to take a written exam at a specific date and location. Instead candidates were able to visit testing centers around the state and country to take the exam at a time of their choosing.

“We were just trying to make the exam more accessible to everybody,” Duffy said.

The state police launched an outreach campaign in 2021 and 2022, with a focus on attracting more minorities and women.

Duffy said other recruiting efforts included emphasizing the numerous opportunities for advancement and growth that come with a larger agency. And for the first time the troopers relaxed their strict policy that disqualified candidates with any tattoos visible with a uniform on.

The Oswego County Sheriff’s Office is trying to fill openings for deputies in patrol and the county jail, but its starting salary of $51,196 is lower than some other agencies. Toomey said they talk up others perks. Deputies work on 12-hour shifts instead of 8-hour shifts, which means fewer days of work and more time off throughout the year. Deputies also take their vehicles home and don’t have to drive in for roll call before starting their shifts.

Toomey said the lengths departments are willing to go to in an effort to recruit candidates is a remarkable departure from the hiring landscape when he entered policing decades ago.

“Before when you got offered you took the job wherever you were offered it because you just wanted to get into law enforcement,” he said. “Now when the list comes out we’re all scrambling to do interviews and get people in here so we can make the offer and the pitch.”