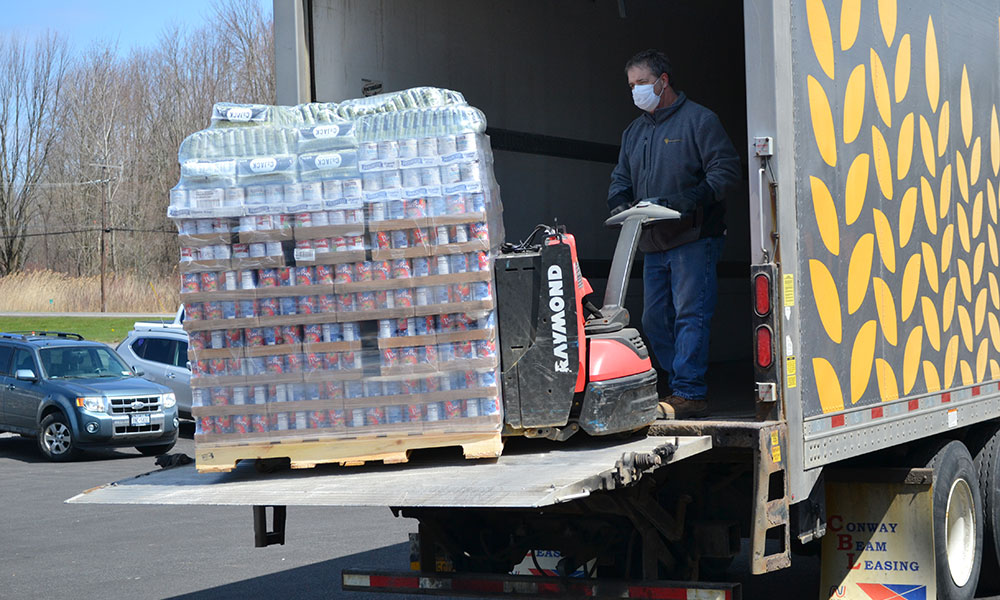 A worker unloads a food truck from the Food Bank of Central New York at a pantry in Mexico during the pandemic.

It was the spring of 2020 and the coronavirus was just beginning to shutter offices, schools and businesses when Kathy Melia decided she should be prepared for whatever happened next.

Melia, who is the coordinator of the Redfield Community Food Pantry, immediately placed an order with the Food Bank of Central New York for a truckload of food to ensure the pantry was fully stocked. Then she surveyed her small group of volunteers to learn their intentions.

“They were worried about making sure everyone had enough to eat. So, we never considered closing,” she said.

Not a single person stopped volunteering even though many were well into their 70s. The pantry has remained open throughout the pandemic and continued providing food to those in need. The lone exception was a week they closed due to inclement weather, Melia said.

With a handful of exceptions, the food pantries rely entirely on volunteers to operate. The volunteers tend to be older than the general population, with many in their 70s and 80s.

Older adults run a greater risk of requiring hospitalization or dying if they’re diagnosed with the COVID-19 virus. According to the Centers for Disease Control and Prevention, eight out of 10 virus deaths reported in the U.S. have been in adults 65 years and older.

To be sure, many older volunteers stayed home. But a cadre of older volunteers returned week after week, quietly going about their work and in the process keeping helping some pantries to remain open. 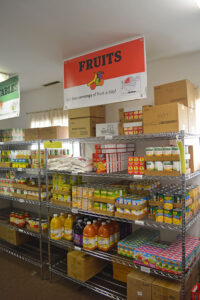 JoAnn Locy, who runs Human Concerns Center Food Pantry in Oswego, said the pantry is made up entirely of volunteers, mostly older women, though a handful of men help and some other volunteers just pitch in with unloading food truck deliveries. She began noticing many of her volunteers stopped coming early last spring.

“We have unfortunately lost a number of our volunteers because they were from anywhere from 70 on up,” Locy said. “Their families are just really concerned that they might have contact with somebody that’s going to do them in.”

The reasons older volunteers — many of whom had helped for 15 or 20 years — stopped appearing were multifaceted. Some did so on the advice of their doctors or after prodding from adult children. Others were concerned about getting their spouses sick or had serious illnesses or conditions, such as cancer, that made them even more vulnerable.

Locy said she completely understood why many stopped volunteering. The volunteer crunch was especially challenging for Human Concerns because the pantry is open five days a week, while many smaller pantries open just one or two times a week.

“We did worry about that, having to close,” Locy said.

They also considered cutting back their hours, but were ultimately able to muster enough people to continue operating. Some older volunteers continued coming in. Others agreed to be on call if they needed an extra person to help in a pinch. And the pantry was able to fill in its ranks with a handful of younger volunteers.

Coaxing older volunteers back after nearly a year proved somewhat difficult, Locy said. Some had gotten out of the habit and decided they preferred spending more time with family. Others were still concerned about their health. Most eventually did return to help out. 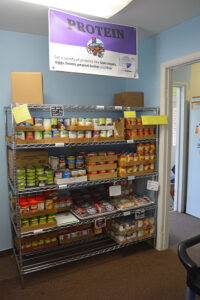 “Our volunteers are fantastic,” Locy said. “I can’t say enough about our volunteers. They are very devoted to the Oswego Community.”

Smaller food pantries that had fewer volunteers to begin with tended to struggle more when the pandemic hit.

“Everybody kind of quit,” she said. “They were scared. Everybody took a leave.”

The pantry closed for two weeks in March to figure out a way forward. When they reopened they operated for a brief period with just four volunteers and scaled back hours. Despite the challenges, Coville said they never considered closing down long-term.

Some of the older volunteers returned, but Coville said she recruited some new people and has been relying on younger volunteers for help. Even the town supervisor pitched in. She also recruited teachers to help out for a time last year. The pantry only recently expanded its schedule back to five days a week.

Recruiting enough volunteers hasn’t been the only challenge faced by food pantries during the pandemic. They’ve also had to implement new procedures to keep themselves and the clients they serve safe.

Bruce Nothstein runs the Pulaski Community Food Cupboard. At 62 years old, he’s the youngest volunteer. His other volunteers are in their 70s and 80s and some have health conditions. So, when the pandemic hit he closed the pantry for a week to figure out what to do.

He was able to reopen two days a week instead of three with the help of two remaining volunteers who continuing helping throughout the year.

At first, they kept clients outside, filled boxes with food items and handed them out through the door. Now they’ve developed a system meant to prevent the spread of the coronavirus. Everyone wears face masks and stands six feet apart. One person at a time is allowed in the doorway.

Each client that comes in is asked several health screening questions. Volunteers fill their food order and wipe surfaces down with disinfectant after they leave, Nothstein explained.

Most of the food pantries in Oswego County have adopted similar procedures with guidance from the Food Bank. Some have returned to letting clients in their buildings to pick out items like meats and fresh produce. Others have had clients fill out paper menus, bagged the food up and brought it out to their vehicles.

As challenging as adopting new procedures might have been, pantries benefited from an expected break during the pandemic. For a period of time last year, most pantries actually saw the number of people they served dip.

“I thought we would get slammed, but we didn’t,” said Jackie McKelvey, who runs the Hannibal Resource Center Food Pantry. “I think it was because at the time they were having the giveaways and school meals.”

Massive food giveaways, free food boxes from the USDA and heavy stimulus spending by the federal government all likely contributed to the lower numbers, pantry coordinators said. People in need were still getting help, but they were getting much of it elsewhere. McKelvey said they continued serving many people who were struggling to make ends meet before the pandemic.

Over the course of the year many pantries began to see the number of people they were serving rise again. According to the Food Bank, pantries in Oswego County distributed a combined 2.2 million pounds of food in 2020.

Several food pantry coordinators said they are looking forward to getting back to normal and seeing more of their older volunteers return. And none of them expressed regret over their decisions to remain open through the pandemic.

“It’s just doing what I was taught,” McKelvey said. “You give until you can’t give anymore. I enjoy doing it.”