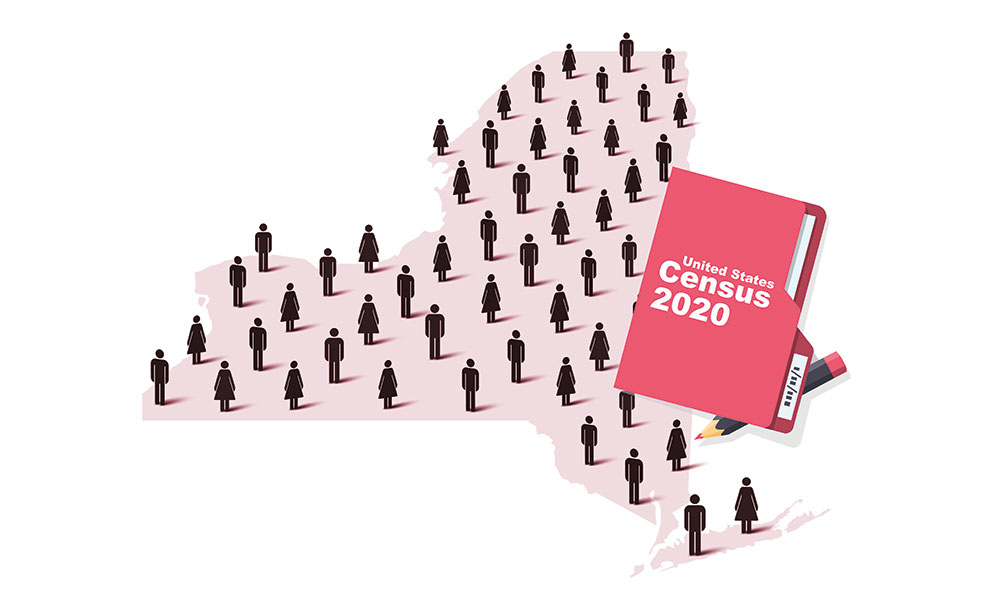 The results of the much troubled 2020 decennial census are in, and, as feared, New York will lose one congressional seat (27 to 26) and with it one electoral vote (29 to 28).

Despite the loss and the political upheaval in Albany, most political observers predict that New York will remain firmly in the Democratic column for the 2024 presidential election.

Aside from congressional representation, the decennial census — meaning that it is constitutionally required every 10 years — is one of the nation’s most important programs. Results of the census will determine New Yorkers’ fair share of federal funds for programs essential to health care, education, housing, economic development and transportation.

The representation loss continues the decades-long trend even as our population edges up, but not nearly as much or as fast as some of the southern and western states. The 2020 numbers show the nation’s population at 331,449,281 or 7.4% higher than 10 years ago, but it is the slowest rate of growth since the 1930s.

Many believe this number is badly undercounted because of the COVID-19 pandemic, weather-related issues and nationwide racial demonstrations. In counts that are close to making significant differences in states either losing a seat or failing to pick one up, look for some of these states to go to court to ask for relief, maybe even a recount.

Among them is New York, because if 89 more people had been counted in the state, it would have kept its departing member of Congress; instead, it went to Minnesota, which just missed losing a seat.

It was the narrowest margin by which a state lost a seat in the modern era, according to census data. The next closest was in 1970, when Oregon missed by 231 persons.

Many political observers were surprised that New York did as well as it wound up doing, because there were dire predictions that the Empire State was going to lose two representatives.

Still, the loss could be costly.

Blair Horner, executive director of the New York Public Interest Research Group, said that such a razor thin margin can make a huge political and financial difference for the state.

While it is not known which district will be eliminated until the congressional districts are sliced and diced, it is likely to be the district held now by Tom Reed, a Republican who is retiring at the end of 2022 as he faces allegations of sexual harassment.

Reed represents a district that stretches from Western New York through the Finger Lakes and into the Southern Tier. The sprawling district comprises 11 counties, including all of Allegany, Cattaraugus, Chautauqua, Chemung, Schuyler, Seneca, Steuben, Tompkins and Yates and parts of Ontario and Tioga.

In the 24th congressional district, represented by John Katko, a Syracuse Republican, there has been little growth in the past decade. The district includes all of Onondaga, Cayuga and Wayne counties and about two-thirds of the western portion of Oswego County.

… If 89 more people had been counted in [New York State], it would have kept its departing member of Congress…

The remainder of Oswego County is in the 22nd District, represented by Republican Claudia Tenney of New Hartford, and is sandwiched in among a number of counties stretching from the Pennsylvania border through the Southern Tier and into much of Central New York east of Syracuse, including Utica and Rome.

Because of the static numbers in both districts, there is likely to be many municipal realignments to either district.

The goal is to create districts whose population is as uniform as possible. In 2010, the so-called ideal district would have included 717,707 people. Then, the 24th district had about 687,000, while the 22nd had about 676,000. In 2020, the population ideal will be 777,529. It’s obvious that both local districts will have to add contiguous municipalities because they will be so much further out of whack.

We won’t know official municipal population figures and demographic information until about mid-August, census officials said, about a nearly six-month delay because of pandemic-induced issues in collecting data in 2020.

From the time when the colonies became states until 1962, New York state had the greatest population in the country but gave up that lofty position to California. Today, New York is the fourth most populous state, also behind Texas and Florida.

The irony is not lost on state officials that gains in economic and political clout in these warm-weather states have been helped along by the out-migration of New Yorkers.

The state’s 27-member congressional delegation is made up of 19 Democrats and eight Republicans. This is a far cry from the 45 representatives that the state had after the 1930 and 1940 census counts.

The new map to be drawn for 2022, which will be in existence until the 2030 Census, will be heavily tilted toward the Democrats, who also lay claim to both U.S. senators — Senate Majority Leader Chuck Schumer and Kirsten Gillibrand.

Redrawing district maps has been a contemporary pain in the neck, and with the hyper-partisan atmosphere that permeates Albany and Washington these days, we can expect nothing less when legislators begin to slice and dice the 2020 numbers.