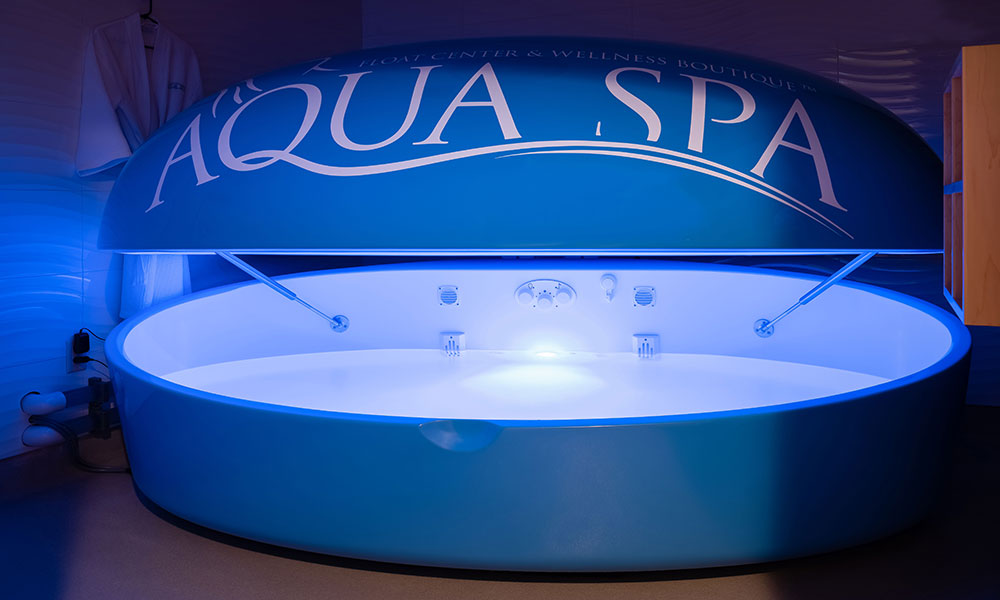 Under pressure? Forget about it.

The Port City is home to just what you need to rid yourself of pressure — and to improve your overall health at the same time — the Aqua-Spa Float Center and Wellness Boutique.

I know, from first-hand experience. Recently, I had an opportunity to test the waters, so to speak.

I hung on to the handles on each side of the doorway and tentatively stepped into the water. I slowly got down to a sitting position, leaned back and immediately started to float. There were no ripples.

The water was warm at first, but seemed to cool slightly after a moment. Hello to 11 inches of skin-temperature water saturated with 1,500 pounds of Epsom salt. Goodbye to the distractions of the outside world.

“Your mind is now free to process things without distractions. Your brain releases dopamine and endorphins, stress-related hormones are lowered and your body and mind get to rest,” Tammy Wilkinson, float ambassador of the new Aqua Spa Float Center, had told me in preparation of my inaugural float. She and her fiancé, Terry LeRoi, are the co-owners of the business.

Each of the four suites is nearly eight feet long, six and a half feet wide and seven feet tall (“allowing for a decadent singles float or a cozy couples float.”)

The suites aren’t only spacious; they’re the most luxurious in the industry. All of them feature fiber-optic starlight ceilings, quad in-tank heaters and anti-slip diamond flooring.

“We use a state-of-the-art filtration system that cycles the water three times between each guest,” according to my float ambassador, Katie Mahaffey. “It utilizes hydrogen peroxide, a one-micron filter (a human hair is 10 microns, she pointed out), ozone and UV lamps to remove all impurities. Also, each room is thoroughly sanitized and inspected after every float.”

You are always in control of your experience.

The spa also features a line of organic chocolates as well as a variety of healthy sodas that were created by a couple who got their start on the TV show “Shark Tank.” They also offer three infrared saunas, salt therapy, oxygen bar (only 10% of our energy comes from food. The rest comes from oxygen!), teas and vitamin energy drinks, cryotherapy and massage — including a massage therapist with a variety of techniques and a massage chair that is called “the Ferrari of massage chairs” that works you really hard and some smaller chairs for a more gentle massage.

Float therapy has been around since the 1950s.

“We have been open since Nov. 15,” Wilkinson said.

What is float therapy?

“When you float in a flotation tank, your body absorbs minerals and your body’s magnesium and sulfate levels increase. You’re floating in about 11 inches of body-temperature water filled with salt. This helps calm your nervous system and enhances your body’s natural ability to heal, rest, relax, relieve pain, relieve stress and fatigue and lower blood pressure,” LeRoi told me.

We’ll see about that.

My lower back was sore; the result of a traumatic injury a few years ago. I tried to turn a bit on my side to compensate. Nope. I was quickly flipped over on my back again. I drew my right leg back and was able to float in that position; looking like a runner sprinting to the finish line. The pain in my back ebbed and faded.

A myriad thoughts flooded my brain; but, just as quickly, washed away. I was floating alone in the calm.

I turned to the controls along the side wall and flicked on the music and then the “stars” in the ceiling. After a moment, I closed my eyes and drifted around. A few minutes later, I opened my eyes and didn’t know where I was. It took a few seconds for me to realize I had floated to the other side, opposite the control buttons. Pushing off the wall, I wafted back to the other side.

I had scheduled a one-hour float. After a while, I started counting to myself in an attempt to keep track of how long I’d been floating. I quickly abandoned that tactic. Floating back to the controls, I pushed the light button again and everything went black, except for the stars. This must be what it’s like to float in outer space, I thought as the weightlessness relaxed me.

The more I floated, the more I relaxed. Every once in a while, I’d glide over to a wall, bump my head and push off, gently slipping back to the center.

The next thing I remember is the lights coming back on, bright. And a voice saying that it was time to get up.

I dragged myself to my knees, grabbed the door handles and stood up. Stepping out of the water, I started to shiver. The room that had felt muggy when I first entered now felt chilly to me; despite remaining at the same temperature all along. I got under the shower and turned it on hot; it washed away the salt residue. A quick examination of my body showed no wrinkles. That’s odd. I spend a few minutes in a hot bath tub at home and come out looking like a prune.

“There’s no pruning as it’s a different kind of salt; medical-grade Epsom (magnesium sulfate),” Wilkinson explained later. “So many of our guests comment on how soft their skin feels after they float.”

The detoxifying effects of Epsom salts help soothe the skin by exfoliating dead skin cells. But don’t let this fool you into thinking that it’s pure luxury. In fact, our bodies need magnesium to help activate our lymphatic system, further detoxify and boost immunity. Floating is simply the best way to absorb it nowadays.

My hand unconsciously flowed to my cheek; not ‘baby soft’ but still …

Following the float, I did feel more relaxed and refreshed.

I actually did sleep pretty well that night, albeit being jolted awake shortly after midnight by a playful kitten (their internal clocks are wired differently). And, the following day the float experience washed over me throughout the day; I was tempted to curl up in bed —but I had to finish this article.

Q & A with Michael J. Hertzendorf