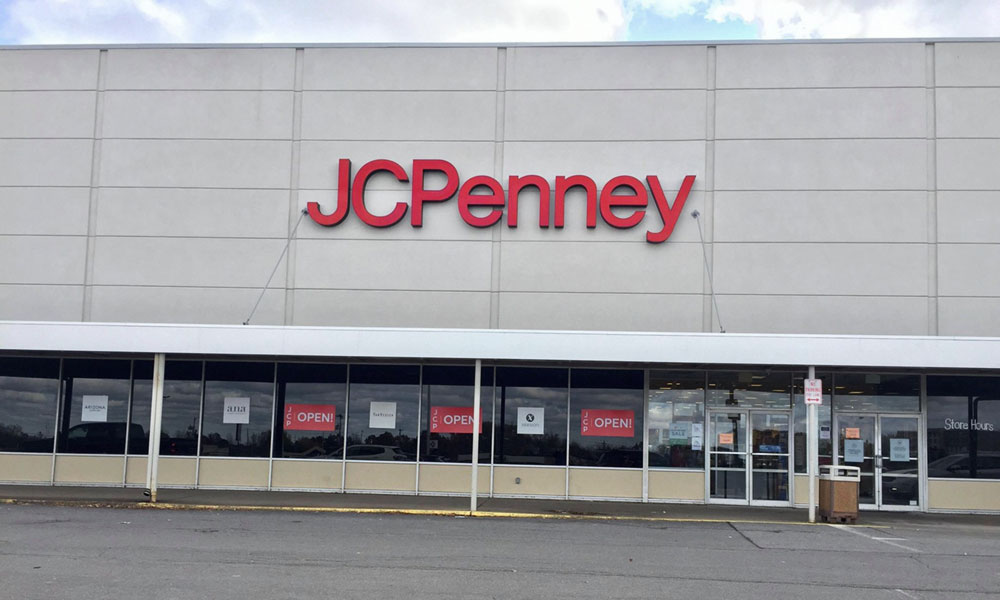 Front of the current J.C. Penney store on the east side of Oswego.

When J.C. Penney filed for Chapter 11 bankruptcy protection earlier this year, many wondered about future of the department store chain’s longtime Oswego location.

The once formidable retail powerhouse was in the midst of a long decline, the victim of mismanagement, as well as competition from the internet and discount department stores. When the coronavirus pandemic forced retailers to shutter their stores this spring, J.C. Penney collapsed.

The reason for the change wasn’t clear, but the news caused many former employees to reflect on their time there and what has changed.

Before J.C. Penney opened in the Oswego Plaza in February 1977, the space was occupied by W.T. Grant. Largely forgotten today, Grant was the nation’s 17th largest retailer when it filed for bankruptcy protection in 1975. Bev Bateman worked there before it closed. She was surprised when she received a phone call from the human resources officer at W.T. Grant.

“She called me, she said ‘You want to come to work?’” Bateman says.

J.C. Penney was opening a new store in the location, the woman explained. She was told to report to work the next day. The reason for the hurried hiring soon became clear.

“We started of course in the stock room because all the freight got shipped in,” she says. “And we were wall to wall, ceiling to floor boxes.”

Bateman and the other new hires, many of whom had worked for W.T. Grant for years, checked all the new merchandise in, brought it to the floor and set up the departments throughout the store. There was training on the cash registers and more work to ready for the opening.

Preparing the new store was exciting and nerve-racking, Bateman says. There were scores of people in management lurking around and everything had to be just so for the opening.

When it opened the store had more than 50,000 square feet of retail space, as well as a 96-seat restaurant, a six-bay automotive center and a salon. There was a robust catalog department and a sewing department; the store even sold firearms and ammunition for a while. Over the year’s J.C. Penney phased out many sections, choosing to focus on its core department store offerings.

Mike McCrobie was a sophomore at SUNY Oswego at the time and looking for a part-time job while he attended school.

“Back then a good part time job like that — if you had it during the school year and in the summer — that could pay your tuition for the year,” he says. “Not so much anymore.”

McCrobie was hired as a sales associate before the store opened. He remembers being taught customer service skills and being shown a film on the history of J.C. Penney. He didn’t do much shopping at the bigger department stores in downtown Syracuse such as Chappell’s and Dey Brothers, and developed a loyalty to J.C. Penney. His first credit card was a store card. He says the Oswego store was well suited to the needs of the community.

For example, when he worked in the men’s department it wasn’t uncommon for a mother to come in with her teenaged son and say he needed a suit for calling hours after a death in the family. When he worked in the shoe department, there’d be a rush for back to school shoes in the summer and a flood of men seeking winter boots in the fall.

“It just really catered to the needs of the community,” he says. “Everything from a sit-down restaurant to shoes, clothing, bedding, you name it.”

Years ago, J.C. Penney would do small things that went a long way toward employees building relationships with customers, says Barb Arras.

Arras started at the store in 1991 as seasonal holiday help and stayed 23 years. She worked her way into human resources and managed several departments over the years including jewelry, shoes and women’s. She remembers when the store had special VIP nights. The employees dressed up in tuxedoes and served cake to customers.

“We really got to connect with our customers back then,” she says. “Now there’s just not that time, you just can’t do it.”

There were other personal touches. At Halloween they dressed in costumes and handed out candy to trick-or-treaters. At the start of the Christmas season they distributed complimentary J.C. Penney ornaments to shoppers. And Santa Claus arrived each year, holding court in the middle of the department store and meeting with children.

For many years the store also held an annual Easter egg hunt, complete with an appearance by the Easter bunny. They also had a photographer come in for portraits several times a year.

“It was a much different atmosphere when I was there,” Arras says. “It was special. It was more of a personal touch back then.”

When it opened in 1977, J. C. Penney had more than 50,000 square feet of retail space, as well as a 96-seat restaurant, a six-bay automotive center and a salon. There was a robust catalog department and a sewing department; the store even sold firearms and ammunition for a while.

When Arras worked in jewelry she went out of her way to find exactly the right item for customers. She once had a customer who wanted a special pair of 1-carat earrings. Arras worked tirelessly to track down the perfect earrings for the customer.

“She was just so happy,” Arras says. “Like I said, it was personal back then.”

The store made an impression on Susan Sawyer. As a teenager in the 1980s she says the cool kids shopped at J.C. Penney. She saved her babysitting money to buy a trendy yellow polo shirt from the store.

Sawyer watched her older cousin get a job at J.C. Penney and decided she wanted to work there too. When she was old enough, she put in an application and returned to the store each week for months to update it. She was hired in high school and continued throughout college.

As much as she liked her job, Sawyer says that like many young associates she ended up spending a good chunk of her paycheck on clothes. The associate discount at the time was 15 percent and employees could snag new items that came in and place them on layaway. It didn’t help that associates needed to be well-dressed for work, Sawyer says.

“They had a very strict dress code back in the ‘80s,” she says. “You’d get called on the carpet if your ankles were showing.”

Men were expected to wear shirts and ties, but sport jackets were preferred. The dress code wasn’t the only thing that was stricter. Any time a cashier had a lull they were expected to check the fitting rooms or straighten up merchandise.

“We didn’t leave that store at night until it looked perfect for the customers the next day,” Arras says. “It’s just a totally different atmosphere today, in every store I think. I don’t think anybody has the time to do that anymore.”

Jan Edwards was hired in May 1977 as an associate in the fabric and gift department and eventually worked her way into management. She believes the employees’ commitment to providing excellent service helped sustain the store through corporate reductions.

Unlike the heavy turnover more typical of retail today, Edwards says the store was buoyed by a core group of employees who enjoyed their jobs and stayed on for years or even decades.

If a job at J.C. Penney could be demanding at times, there were also moments when the company showed it appreciated its employees. There were special luncheons to celebrate associates’ birthdays and other special occasions, Edwards says. Summer picnics complemented the annual Christmas party, which was held off-site, after the holidays.

Supervisors even found a way to make the sometimes-agonizing job of asking customers to sign up for a store card more fun.  They were always thinking up contests to make the task more bearable and, for many years, the store met its goals for signing up new customers.

Employees took pride in engaging with customers and their input was valued, especially when purchasing was still done locally. She says customers reciprocated by remaining loyal shoppers.

“The store always had a family atmosphere on both sides of the counter,” Edwards says. “The community was very committed to supporting local business which has been the key to the store’s success.”