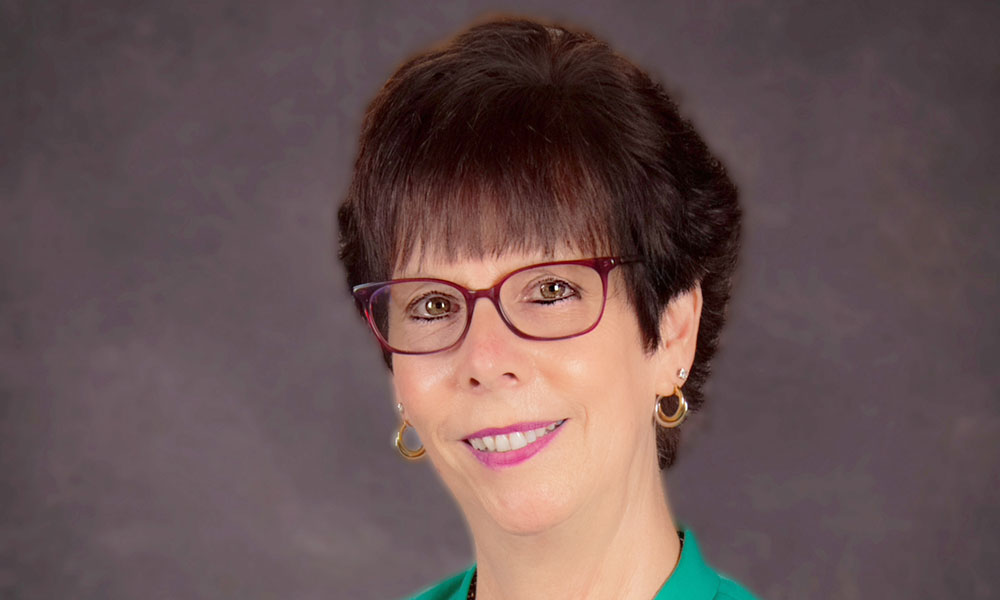 When Catherine Gill arrived at St. Luke 32 years ago as the new controller, the 120-bed health-related facility had only two payer sources – Medicaid and private – and just three people in its business office.

“It was pretty straightforward and easy,” she says. “Over the years things have changed.”

Add being a new boss to the changes.

Gill is now chief executive officer of St. Luke Health Services and its affiliated nonprofit providers Bishop’s Commons and St. Francis Commons in Oswego. She took the helm at the beginning of the year following the retirement of longtime CEO Terrence Gorman.

The organization Gill now oversees provides healthcare and residential services to more than 300 people a day and employs a staff of 400. Gill grew up in Oswego and came to St. Luke early in her career after earning a business administration degree from SUNY Oswego. She admits she didn’t intend to stay for three decades, but says she was able to grow within the organization.

As the facility expanded in the early 1990s, the board of directors wanted another licensed administrator as a backup. So, Gill became licensed and moved into the assistant administrator role in 1993; a decade after that she became chief operating officer.

“‘I grew up here’ is what I tell people,” Gill says, laughing. “I’ve done it all in this organization and I’m excited for the opportunity to move into the administrator/CEO role.”

Gill says she’s prepared to lead St. Luke because her boss, Gorman, allowed her to learn and play an important role in running the organization. The pair worked together for 32 years and during that time Gorman was being a tremendous mentor, she says.

Gorman is quick to point to Gill’s depth of knowledge of long-term care, bolstered by the fact that she’s one of the most senior employees in the organization.

Having a steady, experienced hand leading the organization is crucial as St. Luke and residential care facilities nationwide deal with the ongoing pressure of the COVID-19 virus.

In the interest of keeping them safe, nursing home residents have gone months without their families being able to visit in person, a situation that has been extremely hard.

Staff have worked with residents to set up video chats via Skype, FaceTime and Zoom to help them stay in touch with family. And some family have been able to visit outside windows.

Challenging times have necessitated being flexible and willing to adapt. Gill says she’s especially proud of the staff for helping address a unique problem. Since the pandemic ended in-person visits, nursing homes have been flooded with calls from families checking on their loved ones. It can be as simple as someone calling because a parent isn’t answering the phone.

Normally, the call would go to the resident’s floor for staff to field. But with no family visits, the number of calls checking on residents skyrocketed, pulling staff away from providing hands-on care to residents. Several months ago, the staff came up with a solution.

“We asked them to help and they came up with this idea and I just love it,” Gill says. “It was very, very creative.”

Employees Lending Family Support, or E.L.F.S., was the result. In essence, employees adopt specific units and become the contact person for families. The employee can update family on how their loved one is doing, or if they’re having trouble reaching their loved one, the employee can find out what’s going on. Families know they can call that specific person for updates, and other staff can spend more time caring for residents.

Dealing with the strain on staff during the pandemic has also been challenging. New directives from the health department have come on a weekly and even daily basis, forcing staff to adapt, Gill says. They must remain clad in protective gear throughout their shift, even when helping residents with difficult tasks such as showering. And they have worried about their own health.

“You hear that phrase “healthcare heroes” thrown around, but it is true,” Gill says. “I have been humbled with this pandemic to see how our staff have just pulled together and rallied for our residents because it’s all about keeping them safe.”

Preventing staff burnout remains crucial and Gill has tried to lead by example when it comes to having a work-life balance, though she admits that has been easier said than done recently.

“I learned early on that you sometimes have to leave things at work,” she says. “If you take it home I don’t think you’re effective.”

Outside of work, Gill loves to dote on her Havanese dog named Cocoa. She also enjoys cooking for family and friends and especially barbecuing in the summer. She says she loves learning to cook new dishes and is open to trying just about anything.

Her true vacation doesn’t begin, however, until she’s left land. Over the years Gill has taken roughly 30 cruises. She takes three cruises a year and says that’s when she can recharge.

“There’s something to always look forward to,” she says. “It’s extremely relaxing.”

Gill took her first cruise after she and a friend decided to do something different for vacation. They met some nice people on the cruise and quickly became friends. For the last few years, they’ve taken cruises together and enjoy catching up with each other. And her favorite cruise destination? The Caribbean because, as much as she loves Oswego, she wants to be someplace warm on vacation.

Gill says she doesn’t anticipate making any significant changes as CEO until after the danger from the pandemic has passed.

She says she has heard from many employees who are glad she is taking on the new role, rather than an outsider who isn’t familiar with the organization and its culture. She has an open-door policy and describes her management style as collaborative.

Cheryl Ascenzi and Gill grew up together in Oswego and remained lifelong friends. She says the passion and commitment Gill has for caring for the residents, families and employees at St. Luke is simply a part of her personality.

Gill fulfills a similar caretaker role with family and friends, Ascenzi says. She’s often the first person to sense that a friend or family member is in distress, sometimes before they realize it or express it themselves.

She is the kind of person who remembers birthdays and milestones, Ascenzi says. During good times she is the glue that pulls people together. In difficult times, she is the rock others lean on for support. Those qualities are part of what makes her a good fit to run St. Luke, Ascenzi says.

“Cathy is a servant leader,” she says. “She wouldn’t ask someone in the organization to do something that she wouldn’t be willing to do herself.”

Hobbies: Enjoys cooking and traveling. Has taken about 30 cruises, but none since the pandemic began. Enjoys making friends on cruises.