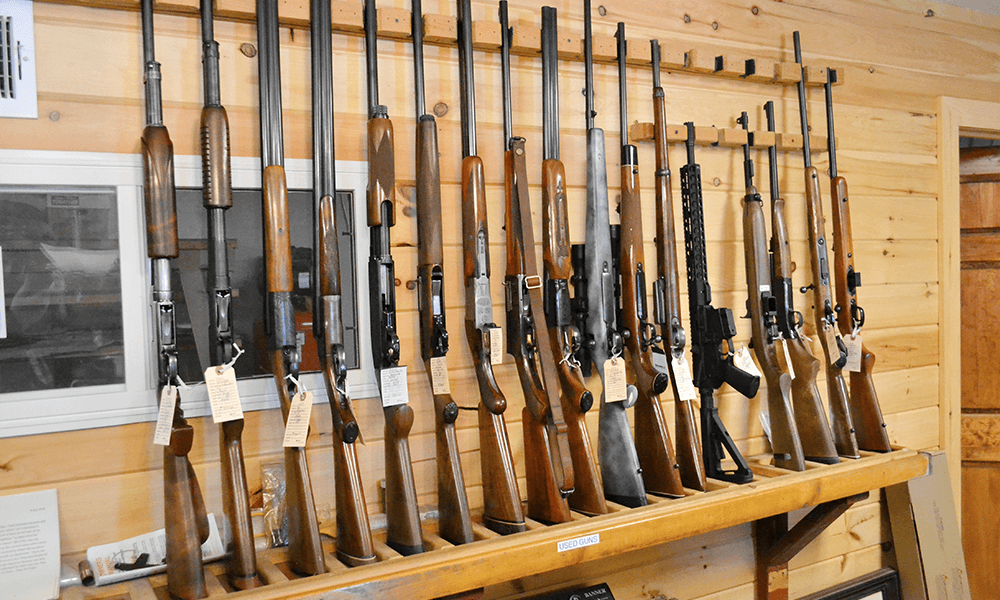 It’s Saturday at Buck-N-Bears, a hole-in-the-wall gun shop on a barren stretch of state Route 104, about half a mile from Interstate 81. A sign advertises Tannerite and .22-caliber ammunition. American and “Don’t Tread on Me” flags fly outside, along with a flag declaring “Guts and guns made America. Let’s keep it that way.”

As Bill Fairbrother chats with a customer from behind the counter, he doesn’t appear to be in a hurry to sell the man anything. His wife and son wait on other customers, answer questions and talk with regulars.

“Customers come in and we get to know them and they get to know us,” Fairbrother says. “A lot of our customers become friends and they just come here to hang out sometimes. That’s a little harder to do at a big box store.”

For decades there’s been an oft-repeated story: Walmart and other big-box chains move in and small businesses succumb to the rock-bottom prices afforded by economies of scale. But mom-and-pop gun shops have remained a fixture in Central New York despite competition from big box gun retailers.

The Bureau of Alcohol, Tobacco, Firearms and Explosives lists more than 100 federal firearms licensees in Oswego and Onondaga counties. Most don’t run brick and mortar shops, but many owners gradually get into the business, which was the case with Fairbrother.

He enjoyed hunting and tinkering with guns as a boy, carried the interest into adulthood and eventually got his two sons interested in guns. In 2009, they opened the business as a part-time operation and slowly began growing it. Fairbrother and his sons still have day jobs; his wife runs the store when they’re at work. Fairbrother calls the business a labor of love.

“It’s a glorified hobby, I guess you could say,” he says. “A hobby that grew into a business.”

Fairbrother has about 50 firearms in stock, mostly long guns with a small selection of handguns. One of his sons manufactures new ammunition. His other son works in the store and repairs guns. In addition to regular gunsmith work, Fairbrother also refinishes gun stocks and performs gun bluing.

Skip Steinbrecher, who owns SharpShooters Gun Store in Richland, entered the gun business in part because of the shortcomings he saw with big-box gun retailers. After retiring from the Navy, he spent 18 years working for Felix Schoeller in Pulaski and was planning to retire.

“But I couldn’t sit around and do nothing,” he says. “I’m not that kind of person.”

Steinbrecher had enjoyed shooting handguns, but two things moved him to go into business. One was an incident when his wife went to a large sporting goods store and waited more than an hour to be waited on. The other was an issue with gun shop accessibility.

“The problem with a lot of the gun stores around is they’re gun shops and they have some inventory, but they’re open when the owner wants to be open,” Steinbrecher says. “They don’t stick to regular hours and you can’t really depend on them.”

So in 2013 he opened a small shop in in a corner of his garage. A year later he learned the owner of a gun shop in Orwell was winding down his business and planning to retire. He went to see about buying some of the inventory and ended up buying the contents of the entire store, including around 140 guns. His business grew to the point that he converted his entire garage into a store and now stocks around 500 guns.

So how can small gun shops compete with Walmart — largest gun retailer in the country — and other big box stores that hold large shares of the retail gun market such as Dick’s Sporting Goods, Gander Outdoors and Bass Pro Shops?

Mike Bazinet, of the National Shooting Sports Foundation, a trade group for the firearms industry, says big-box retailers are particularly good at marketing and selling a lot of merchandise and generally have a robust online presence.

“And you’ll find good prices sometimes, but a local retailer can be competitive too,” he says. “It depends what you’re looking for.”

Many of the trade group’s members are family-owned gun retailers who are successful because they know their customers and products, and they don’t try to be everything to everybody, Bazinet says.

“You can go into a retailer like that and get really good information,” Bazinet says. “There’s a lot to be said for developing a relationship with your local small retailer.”

Expertise and good customer relations have allowed small gun retailers to exist despite the growth of big box chains such as Walmart, which has more than 4,700 stores across the country, though not all stores sell guns.

“It’s the perfect product for independent store owners precisely because good gun retailing is not mass market retailing,” says Charles Fishman, author of “The Wal-Mart Effect,” which examined the role the retailer plays in the economy and its impact on small businesses.

Fishman — who visited countless Walmart stores while researching his book — says Walmart can be a good choice for consumers if they know exactly what they’re looking for, know how to use it and if price is the main consideration.

“If you need the slightest bit of advice, you’re in the wrong place,” he says. “If you’re a smart gun owner, you want to talk to somebody who knows as much or more about guns as you do. You want somebody who can sell you the right ammunition, who can tell you how the laws are changing, who can give you advice on where to go shoot.”

There are parallels between gun shops and locally owned hardware stores that have done well despite the growth of big box stores, Fishman says.

Ace Hardware and True Value, for example, are retailers’ cooperatives. They enjoy the benefits of a larger organization when it comes to branding, marketing and pricing, but most are still locally owned and operated. When a customer walks into a hardware store they usually need more than just hardware, Fishman says. They may need advice on what to buy, but also on how to use it when they get home.

Ace, True Value and other small hardware stores have cultivated reputations as places customers can go to get good customer service and expert advice, Fishman says. And they’ll often carry less common items than larger competitors, even if they only have one in stock and it’s tucked away high up on a back shelf, he says.

“So they have thrived by retaining the ability and joy in helping people fix their problems,” Fishman says. “Those people buy something you can never in a million years find in a Walmart in the hardware department.”

Fairbrother says while it’s possible to find employees with expertise at bigger stores, he believes customers are often more comfortable knowing they’re speaking with the business’s owner versus an hourly employee.

An employee at a big box store spends most of the time answering basic questions and selling, Steinbrecher says. He occasionally talks customers out of buying guns he feels aren’t right for their needs.

“And when I ask them questions, they understand this really isn’t what they’re looking for,” Steinbrecher says. “I think people come here looking for guidance.”

From a shelf behind the counter Steinbrecher pulls out examples of the hard-to-find ammunition he carries. Some boxes of ammunition are decades old; others are manufactured sporadically. He even brings out a worn box of John Wayne branded .32-40 Winchester ammunition. At $69 for a box of 20 bullets, it’s more a conversation piece than anything.

Last year Walmart and Dick’s raised the age requirement to buy guns and ammunition in their stores from 18 to 21 after a 19-year-old killed 17 people at a school in Florida. Dick’s also stopped selling assault-style rifles. Walmart stopped stocking them in 2015 and hasn’t sold handguns in stores outside Alaska since the early 1990s.

“I’m sure that hasn’t helped their business,” Matt Evanchak says of big box stores. “We don’t really see them as much of a competitor.”

Evanchak runs Tim’s Guns and Shooting Supplies in Elbridge with his father, Tim, and brother, Dennis. The business is full-time for them, Evanchak says, and they stock an assortment of about 500 firearms. They used to sell more rifles, but now handguns drive their business.

In addition to selling firearms not available at some large stores, Evanchak says they stock unusual types of ammunition and do a brisk business buying and selling used guns.

“That’s also where we can compete too,” he says. “It’s not a museum. We’ve got to sell it so we can buy more.”

As guns laws in New York have become more restrictive, customers increasingly rely on their local gun seller to help them navigate those laws, says Steve Haskell, owner of Birddog Outdoor Sports in the town of Oswego.

Haskell, who plans to close his shop this year when he and his wife move out of state, says it makes sense that gun owners would turn to someone they have a relationship with to understand the state’s complicated gun laws. That trust signifies something more than a simple transactional relationship, he says.

“We enjoy working on the guns and we enjoy interacting with people that share a common interest,” Fairbrother says.

Most of the customers who sit down at Haskell’s counter want to stay and talk for a while, he says. It’s not unlike a barbershop: people don’t come just for the haircuts.

“You can’t just tell people hit the road, we’re done,” Haskell says. “You’ve got to want to hear their stories and tell some stories of your own.”