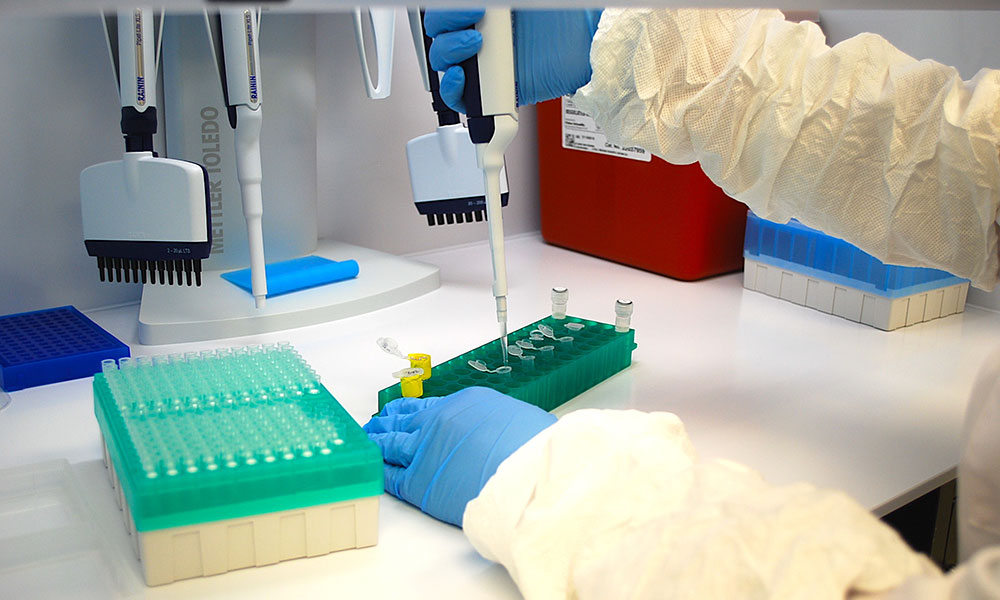 The Extraordinary CNY Company You Probably Haven’t Heard Of

Richard Uhlig’s idea for what would become a game-changing diagnostic testing company began by chance at a hockey rink in Upstate New York.

After a successful career as a Wall Street executive, Uhlig and his wife moved to Ithaca to raise their three boys. In 2014, their youngest son sustained a fairly serious concussion playing ice hockey. When Uhlig learned about the diagnosis and management for concussions like his son’s, he thought it was archaic.

Doctors diagnose concussions using tools such as neurological exams, cognitive testing and imaging tests. But there’s no quick and simple way to test for a concussion.

Uhlig — who grew up in Jefferson County and studied biology at Cornell University before entering finance — thought there must be a better way of diagnosing concussions. He ended up spending six months reading 20 years of clinical research on the subject and concluded there was a pathway forward. He met with the concussion management team at Upstate Medical University in Syracuse to discuss his ideas.

“We essentially formed a partnership with SUNY Upstate and started building the business from there,” he says.

Quadrant Biosciences is expanding and will have nearly 100 employees this spring. It has had more than $40 million in orders for its coronavirus products since the fall.

If you aren’t familiar with Quadrant, that’s not an accident. The company is trying to develop and build intellectual property, turn that into a product and get that product in the marketplace before its competitors can react.

The makeup of living things is stored in dual-stranded DNA. While similar, RNA is single-stranded and acts somewhat like a DNA photocopy. When a cell needs to produce a certain protein, the RNA is dispatched with a copy of the necessary genetic code.

One way to think of RNA is as master signaling molecules created by nearly every cell in the body, Uhlig says. In response to stress or injury, the body produces different RNA molecules, which are present and can be detected in saliva. The technology to detect those unique molecules can offer a window into brain activity and help doctors diagnose neurological disorders.

“The impact we can have on the lives of children and families is profound and that’s what drives a lot of what we’re doing,” Uhlig says.

A saliva test, for example, could confirm for doctors that a patient has suffered a concussion, even if there’s no visible injury. And a similar test could aid in the early diagnosis of autism in children, which is crucial because intensive behavioral therapy has been found to improve the symptoms of autism, and children benefit more from therapy the earlier it’s started.

Quadrant has received roughly $5 million in research grants from the National Institutes of Health for its work on saliva testing for autism spectrum disorder and concussions. The company has expanded its portfolio to include mild traumatic brain injury, schizophrenia and mild cognitive impairment.

In January 2020, Quadrant announced the release of Clarifi ASD, the first product to be launched from the company’s Clarifi Epigenetic Diagnostic Platform. The result of seven years of research, the saliva test is designed to help diagnose autism in in children 18 months through 6 years old.

Unfortunately, the pandemic interrupted and Quadrant made the decision to suspend shipment of its autism tests. Uhlig says they’re planning on relaunching the product in the future.

While the pandemic delayed Quadrant’s product rollout, it also set something else into motion for the company. Uhlig and his wife were having dinner with Upstate researcher Frank Middleton and his wife as well as another couple. It was early March 2020.

Middleton mentioned the failed rollout the previous month of a test for the COVID-19 virus developed by the Centers for Disease Control and Prevention. The test proved to be unreliable and came just as the coronavirus was spreading more rapidly across the United States. He predicted there would be many false negative test results.

“We all put our forks down and said can you tell us about that Frank?” Uhlig says.

Middleton reasoned that they could create a better, more accurate test using saliva, which would be easier than troublesome nasal swabs. Middleton had reason to be confident. He was Upstate and Quadrant’s right-hand man on developing saliva tests and RNA carries the genetic information of many viruses.

Uhlig agreed with him and the company soon pivoted to developing a coronavirus saliva test.

“We had to move very, very quickly as a company into COVID-19 diagnostics, one because we saw there were some major shortcomings in what was available to people and organizations, but also just because we knew that the products that we’re passionate about were not going to be on the forefront of people’s mind for some time to come.” Uhlig says.

But there was a problem. Not long after that dinner, Upstate began closing non-essential operations and sending employees home. Quadrant also sent most of its employees home.

Middleton got an OK to stay behind in his lab and hustled to get the needed materials and support. Upstate chipped in more than $4 million on equipment and supplies to ramp up the testing program to come. A core group of people from Upstate and Quadrant never left. Among them was Uhlig’s youngest son, whose concussion planted the seeds of Quadrant. Now a biology major at Temple University, he spent the summer working in the lab.

The team spent long days laboring on the development of a coronavirus test. The workload wore everyone down, but the team had created a prototype within weeks.

“We were dealt lemons and we figured out how to turn it into lemonade,” Uhlig says.

The collection kits for the test are especially helpful due to the fact that they inactivate antiviruses that might be present in the saliva, while stabilizing it for diagnostic testing at a remote facility. The test became available to clinical laboratories serving patients through doctors’ offices, urgent care clinics and hospitals.

New York state had also approved the tests, which were implemented across all SUNY campuses. Quadrant developed a pooled version of the test that involves combining saliva samples from as many as two dozen samples. If it tests negative, each person is presumed to be virus-free. If there is a positive, then each individual sample is tested.

The system has been credited with helping SUNY schools identify and prevent major outbreaks. It’s also more efficient and inexpensive. Upstate has processed more than a million tests since September and a new laboratory is under construction at the University at Buffalo to increase capacity and speed up analysis of Upstate’s coronavirus test. The test is now used by more than 120 universities, K-12 schools, nursing homes and other facilities.

“We’re thrilled with what we’ve been able to do to serve our community,” Uhlig says.

In December, the test received a No. 1 ranking for COVID-19 saliva tests by the FDA for detecting the virus in its earliest stages. The test was cited by the FDA as being among the most sensitive tests.

The test kits have been a boon for Quadrant, which has sold 3.6 million since September. The company has had more than $40 million in orders for its coronavirus products since the fall, Uhlig says, and is working on fulfilling all of them as quickly as possible.

Uhlig says Quadrant has reached the point where it has cash flow and earnings are positive. A lot of those earnings are being put back into the development of the company’s neuroscience products, he says. The company is also in the process of expanding and will have close to 100 employees this spring.

And what does Uhlig attribute Quadrant’s success thus far to? He points to the company’s intelligent, dedicated workforce and a mission that’s about more than just dollars and cents.

“The type of people that we are able to attract at Quadrant are equally as brilliant as anybody that I worked with at Goldman Sachs,” he says. “The difference is that every single person on the Quadrant team understands that the work that we’re doing is in the service of others. That makes a really big difference in the quality of the outcome.”