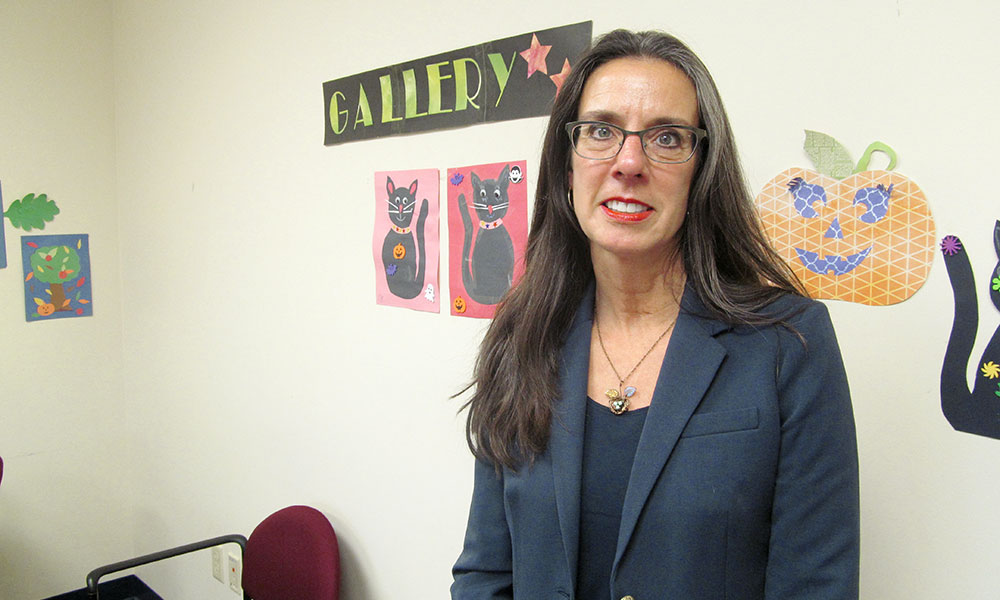 CEO of ARISE, motivated by her own child’s disability, leads nonprofit with passion and persistence

There’s nothing greater than a mother’s love for her child, particularly when it also leads to a fulfilling and challenging career.

That is particularly true for Tania Anderson, who has served as CEO of ARISE since 2016.

ARISE is a human services agency that primarily provides independent living services, mental health services and support for people with developmental disabilities. The organization has been providing advocacy and services since 1979.

Anderson was on the board of ARISE for 17 years and served as its president for the last eight years of her tenure.

Her daughter Eliza was born in 2005 and diagnosed in 2006 at 13 months old with a rare developmental disability.

“The work I had been doing at ARISE as part of the board really became much more personal to me, because now I had a daughter with a disability,” Anderson said. “My previous advocacy work as a lawyer also became more personal to me. I was now advocating for my daughter to have needed services.”

“I have a personal stake in the success of this organization,” Anderson said. “My interest in the disability rights community obviously became more personal, and I was very much engaged in that.”

It was then that Anderson’s predecessor, Thomas McKeown, decided to retire as CEO of ARISE in 2016.

While Anderson was preparing to conduct a search for a successor, she thought, “I think I’ll try for this job.”

“The board hired me as CEO, and we’ve been going ever since.”

ARISE’s largest office is in Syracuse, and besides Oswego, the agency also has locations in Oneida, Fulton and Auburn, along with ARISE at the Farm, a 77-acre inclusive recreational facility in Chittenango.

“We are actively recruiting volunteers who are essential to the success of the adaptive program founded in 1996. Last season, we had about 80 skiers of all abilities,” Anderson said.

ARISE serves more than 7,000 people in its five-county service area and employs 850 people, with nearly 190 of those working in Oswego County.

Besides Oswego, other counties served include Onondaga, Cayuga, Madison and Seneca counties.

Meanwhile, ARISE in the Port City is in the process of establishing a new home at the Creekside Plaza, state Route 104 East, Oswego.

“It’s the same amount of space but it’s a different configuration,” Anderson said. “It’s going to be more flexible and efficient for us.”

She will be able to run the new location at a lower cost while taking advantage of the higher-profile location. ARISE’s prior location was at Hillside Commons facing Fourth Avenue on the west side.

Eliza has Wolf-Hirschhorn syndrome, an extremely rare genetic disorder that affects one in every 50,000 births.

“She’s actually very wonderful, happy, engaged and thriving. It’s characterized mostly by delays. It’s harder for her to learn and processing is more difficult for her. She is the highlight of my life,” Anderson said.

Eliza, 14, is a middle school student. “She’s had a great experience in school. She’s got friends, and she’s made the honor roll,” her mom said proudly.

What makes her job personal is that her daughter receives services at ARISE in the form of community habilitation services and ARISE at the Farm.

ARISE at the Farm is a separate corporation that is devoted to inclusive recreation.

The property has a fully inclusive playground, an arena where adaptive horseback riding is taught, an accessible fishing pond, a ropes course and a sensory trail.

When Eliza gets older, she will have access to employment services from ARISE.

“I see the success and impact of the organization every day when I get Eliza out of bed,” she said.

As an advocate, Anderson not only sees the impact ARISE has in the community, but is helping to ensure people with disabilities have the power and voice to shape their lives the way they want them to be.

“That’s a really important distinction that ARISE has in terms of being a person-centered, independent living center from other organizations that also do fantastic work,” she said.

Anderson had always enjoyed writing and being involved in the community.

She earned a joint degree in English and magazine journalism at Syracuse University with her aim being to become a writer.

Anderson got a job during and after college reporting for The Syracuse Newspapers in Syracuse, moving from different desks while covering local news and weekend events.

She did a stint at the Oneida bureau, and then ended up on the business desk.

“I really enjoyed it, but I found I wanted to have more of an impact in terms of making the news that I was reporting on. Law seemed like an attractive way to do that and I could use my skills such as critical thinking and writing,” she said.

She at first focused on media law having had some exposure to it during grad school, and practiced communications law for a large firm in Washington, D.C. for a year.

“It was fun, but law is such a vast field that you can do so much with. I really wanted to explore everything,” she said.

Other than her experience in Washington, Anderson devoted her entire legal career working in the court systems as a law clerk for the New York State Supreme Court and for the federal trial and appellate courts.

“My role was really as the lawyer for the judge. My job would be to research cases that came before the court, and give recommendations in terms of analysis and outcomes,” she said.

The types of cases would range from divorces to slip and falls, insurance cases, commercial and civil rights litigation, and criminal cases.

“It was really interesting to me as a lawyer and just as a person,” she said. “It allowed me to hone my skills in critical thinking and just learn a lot of nuts and bolts, which is important to anyone in our community.”

Anderson said the common thread with working cases in the court system is solving problems.

“Folks have come to litigation. Most cases don’t go to trial and they are settled at some point along the process. In order to successfully do that, you really have to be able to see all points of view, try to find common ground and solve the problems and resolve the case in a way that is fair to everyone. So that skill can translate to anything,” she said.

Anderson has retained her license to practice law, and is the in-house counsel for ARISE.

“I’m able to do a lot of things that we might farm out otherwise to an outside firm,” she said. “Even when we use outside counsel, the fact that I’m a lawyer speeds up the process and saves us cost.”

“Disability rights are civil rights, and ARISE is an independent living center, which means that we are a civil rights organization that makes sure people with disabilities are completely included in our society and have equal rights that anyone should have,” she said.

Tania Anderson, the CEO of ARISE, knows what it takes to go the extra mile.

Or in her case, miles.

Anderson is a long-distance runner, and has logged 30 marathons in her running career.

She started running during her first law job in Washington, D.C. as a stress release.

“I’ve been running ever since, and it’s been a great outlet for me,” she said.

Anderson lived in an apartment complex in Washington, and there was a group of women that would walk together.

“It was a beautiful route. I would walk out my door and go to Fort Myer, walk around Iwo Jima, and watch the sunrise over the skyline with the Washington monument,” she said.

“Gradually, I would run more than walk and it turned into running,” she said.

Upon relocating to Syracuse, she joined a group of other runners.

“Some of my best friends are from the running community,” said Anderson, who runs all year round.

“It’s good time outdoors, and I pretty much run outdoors no matter what the weather is,” she said. “I end up problem solving a lot when I’m running without even having to think about it consciously. If a problem is rolling around in my head, sometimes while running things will occur to me as a strategy or a way to approach an issue that I wouldn’t have thought of had I sat in front of a computer and stared at it a little bit longer.”

She doesn’t discount the possibility of running more marathons down the line.

“I probably will in a few years, but right now, I don’t have the time to devote to training,” she said.

Anderson noted there is a huge sense of accomplishment with a marathon.

“The fun part is probably training, because there is a variety of things to do to train for a marathon. I got to a point where I was running two a year: one in the spring and one in the fall,” she said. “Also fun is connecting with other runners and having those relationships.

Anderson was never the type of runner who would abstain from certain foods when training. She enjoys the benefit of being able to eat more without having to worry about calories.

“It’s really just being outside, clearing your head and staying fit,” she noted.

She has run the Boston Marathon six times.

“The energy there is electric with so many people running and onlookers cheering on the course,” Anderson said.

Her first marathon was the Marine Corps Marathon in Washington, D.C.

“I got to like smaller marathons after my daughter Eliza was born just to stay closer to home. It was always exciting whenever Eliza would come to a marathon and see me cross the finish line,” she said.

Anderson also enjoys tending to her large flower garden at home, and watching cooking shows with her daughter. She has lived in her house in the Valley section of Syracuse for the past 24 years.

The only lawyer in her family, Anderson credits her parents for her strong work ethic.

“They always supported my brother and I in school and whatever activities we wanted to do,” she said. “They both were hard workers.”

In terms of work-life balance, Anderson said having her daughter and attending to her schedule keeps her on track.

She drops Eliza off at school, and has time with her during the evenings.

“I tend to not work on the weekends, because that’s my time with Eliza,” she said. “I’d rather work late than cut into the time I have with her.”

“The key is to keep organized, try to keep a schedule and keep an eye on what the priorities are that I have to accomplish in any given day,” she said.

Education: Bachelor’s degree in English and magazine journalism; law degree; and master’s degree (combination of a Master of Business Administration and media studies), all at Syracuse University

Hobbies: “I enjoy any time spent with my daughter; gardening, and running.”