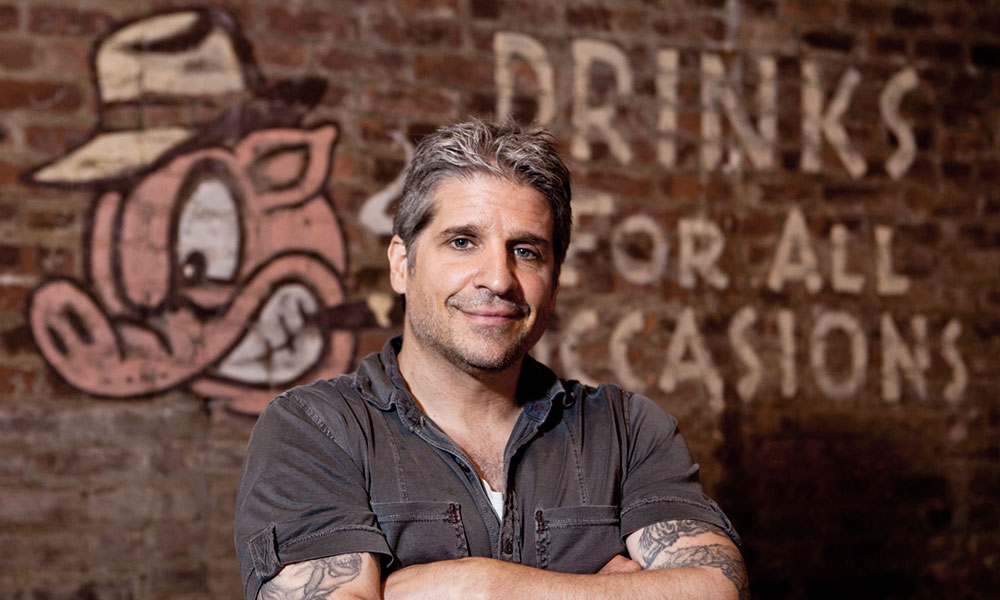 ‘Under-capitalization is probably the No. 1 problem for any business to be able to weather whatever storms come your way.’

John Stage, founder and owner of Syracuse’s famous Dinosaur Bar-B-Que, answers our questions about how he took his passion for good barbecue from an old food truck to a nationally renowned brand, product line and empire that now spans seven restaurants in two states.

Q. The Dinosaur Bar-B-Que empire had what could be described as humble beginnings? Tell us about the origins and where the name comes from.

A. We started this in 1983 at all the biker events up and down the East Coast and then from that point, we moved into fairs and festivals. It was a carny lifestyle and after five years, we got a little tired of that; that’s when we set up in Syracuse. My original partner was named Dino. He was a real big guy and, you know, we cooked over open fire, we rode old motorcycles — so we said we’re like dinosaurs. It just kind of an offshoot of his name and it stuck.

Q. Had you always been interested in working in the food service industry or did you just follow opportunity where it led?

A. I’ve always been a good cook and liked to cook and saw an opportunity in the fairgrounds and at the different biker meets that we could actually make a living at this and be around the people we wanted to be around and travel — you know, some very romantic notions back then of the business.

Q. When you finally decided to take your famous barbeque off the road and open a restaurant in Syracuse, how did you make that a reality? How much did you invest personally?

A. As we spent all those years on the road, it was always a goal of ours to someday get into a brick and mortar space. Traveling like we did, it’s not a very healthy lifestyle. I got really burnt out by being on the road all the time, so it was the next logical extension of that. We just got right into it and learned everything as we went. But it’s a tough racket; it’s a tough business. You’ve got to love it. If you don’t love it, it is the absolute wrong business to get into. So, it starts with a love and passion for the business and then it’s great if you’re capitalized. We didn’t have any money. Nobody would loan us any money. So, we begged, borrowed and stole. We built everything ourselves. Every nickel we made on the road went into the restaurant and we kept going on the road while we were in the beginning phases of this restaurant just to keep this funded. It cost about $40,000 to start.

Q. What was key to your success in launching the business?

A. You’ve got to have something that people want. It sounds simple, but there’s got to be that void in the marketplace and barbecue at that time — there was no barbecue in the Northeast, so you’ve got to have the right idea. And then, you’ve got to be willing to go all in and work your ass off: work weekends, work nights, etc. It becomes not a job, it’s your lifestyle. And then of course perseverance, because the road to success is always under construction. There’s going to be 100 road blocks and you’ve got to be willing to go through them, go under them, go around them.

Q. What were some of the obstacles that were the most difficult to overcome?

A. I’m going to say being undercapitalized because that makes everything harder, though it also makes you smarter and more resourceful. Under-capitalization is probably the No. 1 problem for any business to be able to weather whatever storms come your way. Those first couple of years, I could have closed the doors anytime. A less stubborn person may have.

Q. You decided to grow the business to other locations. As part of this process, you became involved with a corporate backer. What were the pros and cons of going that route?

A. The first three restaurants — Syracuse, Rochester and Harlem — we did on our own and then my existing partners wanted to get out of the business. Instead of me buying them out personally, we brought in financial backers to buy them out and provide capital for growing the business. For a time, it made sense and then it didn’t. It ended up not being how I operate best. I can’t have that many people involved in the decisions. About two years ago, I bought them out.

Q. Would you recommend becoming involved with a corporate backer to other entrepreneurs who want to expand their footprint? If not, what would you advise?

A. When you take on partners, you’ve got to really look at it as it’s a marriage and you have to examine — like in any marriage — what responsibilities are; what roles are; and when you take money or when you bring on people, you have to have a very, very clear vision of what your goals are and whether your visions are aligned. It’s imperative to get all of that out in the beginning.

Any time you go into debt you’ve got to look at what happens if shit hits a fan, can you carry that dead load? And probably the best advice I would give is to grow slowly because I think the most problems we had was when we grew too fast. When you grow too fast, you’re always putting your energy into what’s next. You’ve got to make sure the home team stays watered and is growing internally, that people are taken care of. If you grow too fast, you can lose sight of that. So, I would say just really get your infrastructure set up and don’t try to bite off too much.

Q. Today, you own seven locations, six in New York state and one in Newark, New Jersey. What’s the key to managing all of it? What advice would you give to those who have recently added to their own locations?

A. It’s building the infrastructure and having great people who you can rely on. You set your vision and follow up and give the people in charge operating autonomy under the right vision. The people who run the company with me now all have a stake in the ownership and the stake of the business. I think it’s really important to get everybody a piece of the action — and not just financially, but also in strategy, in how to run it so it’s not a top-down organization. It’s where everyone’s got a little piece of it and more importantly, they’ve got a say in it. That’s the only way I want to operate.

Q. The coronavirus pandemic has hit the restaurant industry especially hard. How has Dinosaur Bar-B-Que been dealing with this challenge?

A. It’s the biggest curveball I’ve ever witnessed. You go through a couple of different phases. The first one is the realization that all of this could be gone, everything you worked on. So, there’s that shock and then it’s strategy of how to get out of it. It’s almost going back to the start of my business 30 years ago. So, it’s like old school — making sure every penny is appropriated right, people are taking care, negotiating with landlords all again, keeping your creditors happy. It’s just really going back to basics. It’s like a street fight right out there.

Q. For all entrepreneurs, no matter where they are in their business or what type of business they’re in, do you have any advice?

A. Love what you do. That’s where it starts. Don’t ever get into anything just to make money. Do what you love and hopefully the money will follow. If you do it the opposite way, it will never work.

‘Love what you do. That’s where it starts. Don’t ever get into anything just to make money. Do what you love and hopefully the money will follow. If you do it the opposite way, it will never work.’