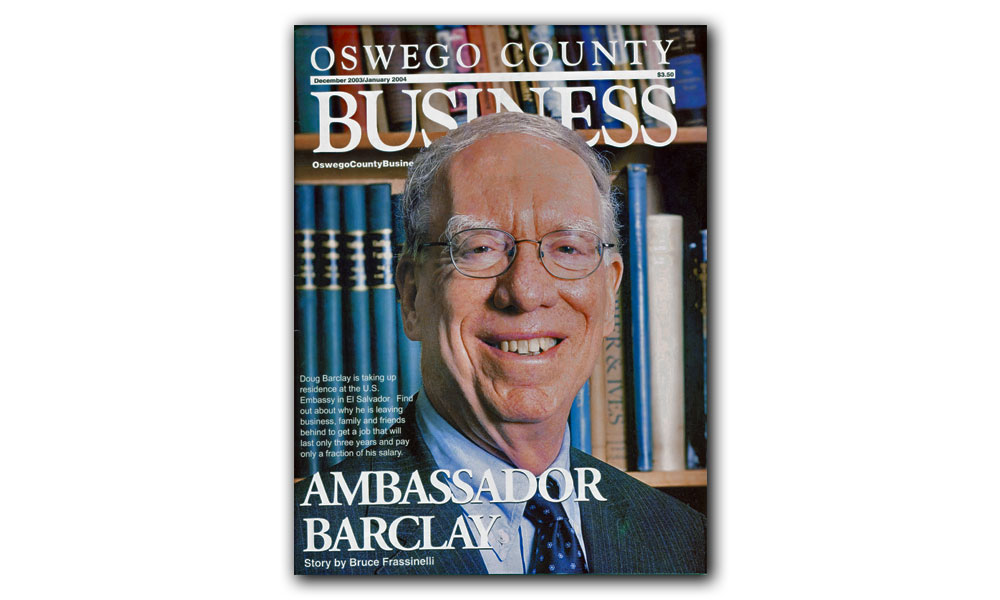 ‘Doug Barclay was one of the few politicians whom I have encountered during my 60 years in the business that understands how journalists and the news media operate.’

When the vice president of Thomson Newspapers Inc. offered me the job of publisher of The Palladium-Times in Oswego, I wasn’t even sure where Oswego was located.

I looked at a map of New York state. I spotted “Owego,” and at first thought that the mapmakers had misspelled the name of the community. But this place was west of Binghamton, and I was told that “Oswego” was right on Lake Ontario.

I had never been the publisher of a newspaper. I was leaving the job of general manager of my newspaper in Easton, Pennsylvania, a position to which I had been promoted just three months earlier after having risen to editor.

I knew that this would be a steep learning curve to understand how the community worked and who the movers and shakers were. In addition to a two-week walking tour of the streets of Oswego and Fulton to introduce myself, I was compiling a dossier of key people to seek out so I could get their perspectives on the community, the county and how it all interacted with the newspaper.

After my first contact — Clark Morrison, one of The Pall-Times’ former owners and the longtime publisher before Thomson Newspapers Inc. bought the paper in the 1980s — I next contacted H. Douglas Barclay.

I was told that Barclay, who served for 20 years as a state senator, was “Mr. Republican” in a heavily Republican county. He was described as a “kingmaker,” and any Republican who aspired to county or state office needed Barclay on his or her side.

I was also told that Barclay was tightly aligned with the Backus family, which at the time ran the Republican-leaning Oswego County Weeklies newspapers, including the Oswego Shopper.

The Palladium-Times was considered to be a “Democratic” paper. This alignment was thought to be a continuation of the prominence in Democratic politics of the Morrison family.

If there was any Democratic bent to the paper, it stopped the moment I walked through the newspaper’s door. My journalistic training has always been to strive for impartiality in our news coverage.

I contacted Barclay and set up an interview with him at his Syracuse law office to introduce myself and to try to understand his outsized influence on Oswego County politics.

Admittedly, I was nervous because of Barclay’s reputation. I was pleasantly surprised at how gracious and easy-going he was at that first meeting. He didn’t try to bully or intimidate the new kid on the block. It was to be a precursor to our relationship throughout my stay in Oswego.

Barclay’s impact on the North Country, Oswego County and the state of New York is legendary, and many deserving words of praise have already been written in tribute to his long and distinguished career.

Even after he retired from the Senate, he played an influential role in Republican politics. He was an ardent supporter of Presidents George H.W. Bush and his son, George W. Bush, or, as he referred to them “Bush 41” and “Bush 43.” He supported former Florida Gov. Jeb Bush, 41’s son, in the lead-up to the 2016 Republican primary. When Bush dropped out, and Donald Trump rose to the top of the pack, Barclay at first reluctantly but later more enthusiastically embraced his candidacy.

The capstone of Barclay’s illustrious political career was when he was appointed ambassador to El Salvador by Bush 43 and served from 2003 until 2006.

He gave me two exclusive interviews during his time as ambassador. When he was first appointed, I asked him how he managed to get such an appointment since he did not have any specific expertise in Central American politics nor any diplomatic experience. He never answered, just flashed that famous Doug Barclay smile.

In doing some digging, I found that the Barclay family had contributed more than $200,000 between 2000 and 2004 to the Republican Party. That’s the way many of these appointments work. Big contributors get rewarded for their generosity.

‘I was told that Barclay, who served for 20 years as a state senator, was “Mr. Republican” in a heavily Republican county. He was described as a ‘kingmaker,’ and any Republican who aspired to county or state office needed Barclay on his or her side.’

Barclay threw himself into the role and proved that he was a quick study. He learned Spanish and won the admiration of the diplomatic community by his performance in the troubled country that has seen its share of hardships and poverty. Barclay also had been a strong supporter of Trump’s secure-the-southern-border immigration policies.

Barclay and I had periodic meetings during my 16 years in Oswego. At one point, he expressed exceptional interest in possibly putting together a local group to buy The Palladium-Times when Thomson announced that it was up for sale in the mid-1990s. Nothing ever came of it though.

He told me that I inspired him to begin a physical fitness program after I had lost 85 pounds following my retirement.

Barclay and I had mutual respect for each other. He was one of the few politicians whom I have encountered during my 60 years in the business that understands how journalists and the news media operate. He never asked for nor expected special consideration in a news story.

I have met and dealt with hundreds of politicians, including presidents, cabinet appointees, governors, legislators and other high-ranking officeholders. He is among my top three all-time favorites.

The Incompetent Boss and the Peter Principle