When I walked into my favorite bagel place for breakfast recently, I thought to myself: “Is there a chance I might not leave alive?”

I wasn’t thinking of a medical emergency but of some person coming in off the street and shooting up the place and those of us in it.

Let me quickly say that in the several years since this business opened and I have been a steady customer, there has never been any incident — not even a loud argument — so why should I even harbor such extreme thoughts?

The proliferation of mass shootings in the United States is the reason, and I suspect that you have had these uneasy thoughts, even if they might be fleeting and quickly set aside, as you ventured out and about.

In “How Randomness Rules Our Lives,” Leonard Mlodinow says that the human mind is built to identify a definite cause, and can have a hard time accepting the influence of unrelated or random factors.

While we have not seen mass shootings in our area of Central New York, one of the most horrific in the state’s history occurred on our doorstep on May 14, at a Tops Friendly Markets in Buffalo.

According to the FBI and police, Payton Gendron, the hate-filled 18-year-old from Conklin, 11 miles south from Binghamton in New York’s Southern Tier, scoped out the Tops market months before, then again a day before unleashing the deadly attack to — in his own words — kill as many Black people as possible. All 10 of the dead were Black. Three others were wounded — two Black and one white. Four of the victims were Tops employees; the rest were customers. In all, the suspect fired 50 rounds from an AR-15 rifle. He also had a rifle and shotgun in his car, according to authorities.

For the record a “mass shooting” is defined as one in which four or more persons are killed or shot, not including the shooter, in a single incident.

The suspect, wearing military fatigues, plated body armor and a tactical helmet, shot four of the victims — three fatally — outside of the store. After finishing at Tops, Gendron had planned to continue his rampage at other Buffalo locations with predominately Black patrons, authorities believe.

None of these people had any relationship or previous interaction with the shooter, but their lives came to an abrupt end in a hail of bullets because they had randomly shown up at the grocery store at the wrong time and they were — with one exception — not white. The lives of their families and friends also will be irrevocably changed. Even those of us who did not know the shooter or any of the victims in this horrible tragedy are changed, because it is yet another example of how we, too, can be cut down as we pursue our daily routine chores and activities.

In Buffalo, 77-year-old Pearl Young went for breakfast and asked to be dropped off at Tops to do some shopping. She never came home.

Ruth Whitfield, 86, stopped at Tops on her way home from visiting her husband at a nursing home. Her husband suddenly lost the care and companionship of his wife of 68 years and one of his primary caregivers.

Andre Mackniel, 53, had gone to Tops to buy a birthday cake for his son. There would be party, no celebration, only a funeral.

Aaron Salter Jr. 55, a retired Buffalo police officer, who was a security guard at Tops, was hailed as a hero for confronting Gendron when he began his deadly assault. Salter’s bullets hit Gendron several times, but they failed to pierce the body armor he was wearing underneath his military fatigues. 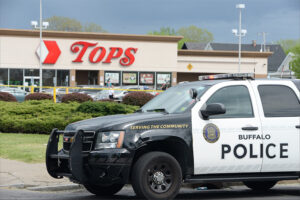 What we want to know is why this man did what he did? Officials are branding this as a hate crime, a case of domestic terrorism. Erie County Sheriff John Garcia called the shooting “pure evil.” The suspect had shown past tendencies of this unbridled hate, but mental health officials decided that he was not a danger to society. Now, of course, we know otherwise.

Authorities uncovered a 180-page “manifesto” riddled with racial, anti-Semitic and white supremacist hatred. Gendron had previously been investigated for making a “generalized threat” at his high school — Susquehanna Valley Central—in 2021, which triggered the mental health evaluation.

It’s amazing to me that although there were concerns for Gendron’s mental stability, he was able to legally buy the gun he used in the shootings.

According to authorities, one of the far-right conspiracy theories that Gendron embraced and may have motivated him to act is called “Great Replacement Theory.” Of late, it has frequently been promoted by Fox News commentator Tucker Carlson and U.S. Rep. Elise Stefanik, R-New York. Stefanik’s district includes Clinton, Franklin, Fulton, St. Lawrence, Jefferson, Lewis, Hamilton, Essex, Warren and Washington and parts of Saratoga and Herkimer counties. Stefanik was 30 when first elected to the House of Representatives in 2014, the youngest woman elected at the time.

The “Great Replacement Theory” is pushed by white supremacists who contend that whites are being replaced by people of color, and Democrats are deliberately trying to flood the United States with immigrants to gain an electoral advantage.

Even after the Buffalo shootings, Stefanik, who insists that she is not racist, did not back down from her views. Please understand that Stefanik is not a fringe GOP member; she is the third highest-ranking Republican in the House of Representatives.

As we go about our daily lives, we are becoming more ill at ease. How many times have we decided on the spur of the moment to stop at the supermarket to pick up a few things? How many times have we thought about stopping then decided to do it the next day. These decisions might turn out to be life and death choices.

Writing in Psychology Today, Dr. Ralph Lewis says, “For many people, the idea that randomness rules our lives is counter-intuitive, unappealing and frightening; moreover, randomness feels purposeless and meaningless to many.”
It is common for us to want to believe that “everything happens for a reason” or that things are “meant to be,” or that something occurred because it was part of “God’s grand plan.”

That is why in situations such as the Tops shooting, we are left with this nagging, uncomfortable feeling that the next time we are the one who might be in the wrong place at the wrong time. In other words, there but for the grace of God go I.