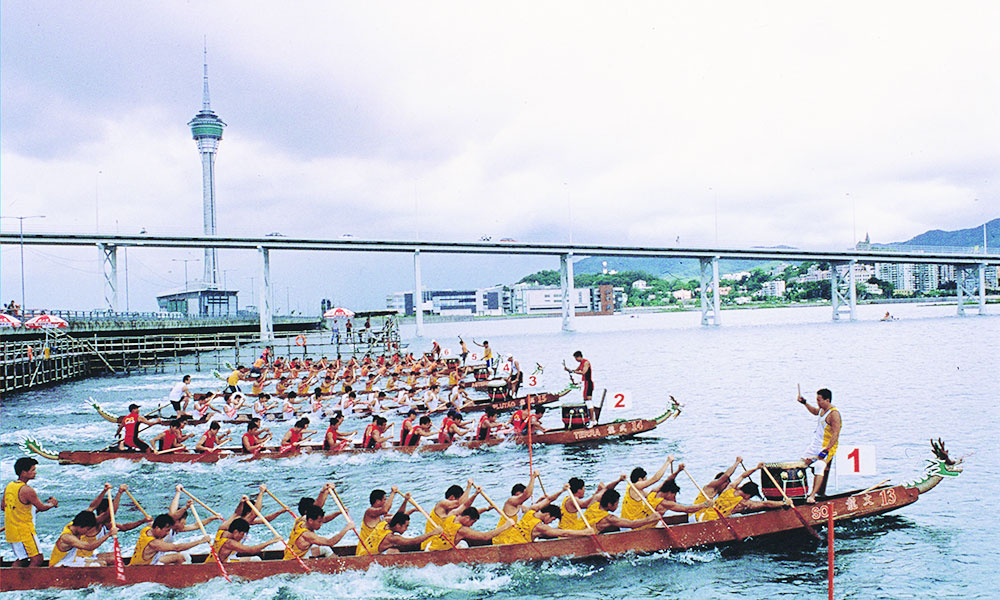 A boat race competition is one of the many events that take place annually in Macau.

City is an intriguing and unique blend of Europe and Asia

A trip to Macau is a sure bet to change any preconceived ideas one may have been harboring about the city, based on casino advertisements or old movies.

To think of Macau as the “Vegas of the East” is to miss the real Macau.

Others put Macau at the end of a long list of places they want to visit because their image of Macau is one derived from old movies.

Gone are the dingy waterfront cafes and dangerous alleys where all manner of decadence takes place.

Macau was a Portuguese territory until 1999 when it became an autonomous region of China. It is located on the south coast of China across the Pearl River Delta from Hong Kong.

Macau is only 37 miles from Hong Kong making visiting a temptation too hard to resist when in Hong Kong. Of course, some fly directly into Macau International Airport but the slick one-hour turbo-jet from Hong Kong to Macau is reasonable, complete with an English-language video and attendants to take food and beverage orders. It departs every 15 minutes.

Macau is an intriguing and unique blend of Europe and Asia. The influence of the Portuguese weaves itself through the fabric of Chinese life producing a unique culture all its own. Baroque churches and colonial mansions are side by side with Chinese temples.

The view is spectacular, especially when illuminated against a night sky, but during the day it provides a panorama of Macau. The cathedral dates back to the early 17th century and is the remains of the first Christian church in China. Like everything in Macau, it is a blend of East and West. It was designed by an Italian jesuit and built by Japanese Christian stonemasons who had fled persecution in Japan. A fire in 1835 destroyed all but the façade, which illustrates the history of Christianity in Asia, including biblical quotations in Chinese.

Next to St. Paul’s is Fortaleza de Monte, a good place to reflect on the defensive role it played against Dutch assault in 1600s. And, now part of the fort, is the Macau Museum where one can get an overview of the energy that came together to form Macau.

Exhibits illustrate life in Macau over the past four centuries, emphasizing the multi-cultural character of the city created by the coming together of people of different faiths and life styles creating the distinctive Macanese culture.

From St. Paul’s, descend the steps and wander slowly into the heart of the city. Brush shoulders with the Mancanese as they go about their daily routine. Stop to watch almond cookies being made. Try some — yummy! If you need a rest, stroll down a side street where you will discover little courtyards, sit on a bench under a tree, and you will think you are in a small town in Portugal.

Continue into the heart of the city and Senado Square with its wave-patterned stone mosaic that is symbolic of the blending of east and west. Stop in the 17th century St. Dominic’s Church with its magnificent altar, decorated wooden ceiling and religious art museum housed in the old belfry. Along the Rua Almirante Sergio it is easy to find a restaurant to sample Macanese food that brings together the best of Portuguese, Chinese and Indian — and Malaya — cooking.

The classic Chinese temple of A-Ma rests at the base of Penha Hill. Its name derives from Tin Hau, Queen of Heaven or the honored mother. Legend has it that a poor girl saved the fishing vessel on which she was travelling from the ravages of a storm. In tribute to her this temple was built and is a place of pilgrimage for Macau’s fishing community. The Kun Iam Temple, the Buddhist goddess of mercy, is not far away. Kum Ian’s statue gracefully towers over the Ecumenical Center of Eastern Religions and is a place where people of all faiths can rest, reflect and meditate.

And, of course, there is the gambling for which Macau has long been famous. Macau is said to have the widest range of casino games in the world.

Try your luck with baccarat, blackjack, roulette, boule, “big and small,” or fan-tan or feed your coins to what the locals call “hungry tigers” (slot machines).

The Venetian Resort is the second largest casino in the world and seventh-largest building in the world by floor area.

Visitors should take time to visit the colonial neighborhoods like Colonane, quiet parks, sandy beaches and hike in the woods, go duty free shopping and enjoy one of the many festivals.

Nothing highlights the multicultural nature of Macau better than its festivals from Chinese New Year to the Feast of the Drunken Dragon, from Macau Arts Festival to the International Music Festival, from the Macau Open Golf Tournament to the Macau Grand Prix.

Macau may be small in size but it is big in variety.