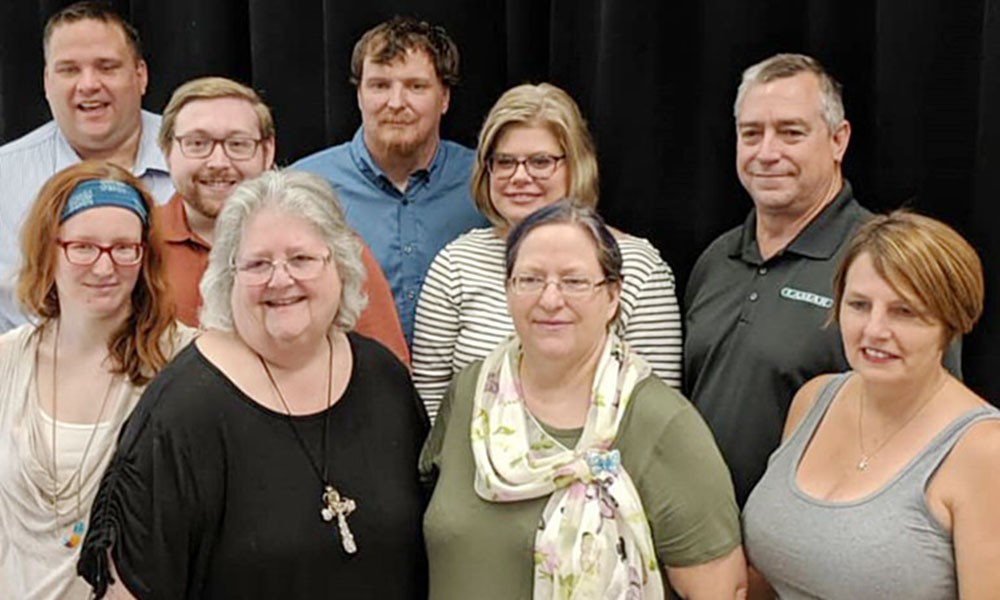 The group celebrated 10 years recently; it is preparing for a new, post-pandemic season

At an age where many others are easing into retirement, Nancy Fox isn’t showing any signs of slowing down.

“I was always a stay-at-home wife and mom who volunteered in whatever my kids were involved in. I have a background in community theater, a BS in arts administration from SUNY Oswego, and an MFA in drama from SU,” Fox said.

She started a small theater company in Oswego, Port City Theatre, in 2006 with her husband.

“We were starting our third season when my husband passed away suddenly in 2008,” she said. “When all was said and done, and I had to decide what to do with the rest of my life. I decided I wanted to do something that mattered.”

The CNY Arts Center started as a grassroots organization 10 years ago, in April 2011.

“I wrote the letter to the editor and invited people to meet and talk about Fulton. My husband grew up here. This is what he left me, so I chose to devote myself to developing an arts identity in Fulton in the honest belief the arts can make a difference,” she explained.

The letter was a call to action to discuss the sad state of affairs in Fulton, the steady decline, the hopelessness and the negative reputation that permeated social media, according to Fox, the executive director of the CNY Arts Center.

Fourteen people responded. A plan was formed to stimulate an arts presence in Fulton, to call artists to share their art, to beautify the city and create a place where people could find art, make art and enjoy art, she said.

“There was a strong belief that the arts could bring a revitalization to the area, stimulate economic activity and create a new identity,” she said.

By July, a nonprofit was formed, approved by the IRS in September and a board of directors was seated.

“Programming began immediately as weekly meetings continued. In January 2012, we introduced the first Snow Day with a children’s carnival and snow themed entertainment and games — even though there was no snow that year!” Fox said.

Several homes over the years

One year later, 2012, the group settled into the basement of State Street Methodist Church to begin programming with art classes and Arty Camp. A stained-glass mural was designed and created with community participation during Oswego’s Harborfest. The city of Fulton built and erected a steel frame to house the mural in Indian Point Park at the north entrance to the city.

The Shineman Foundation provided a grant for a sound system and a light system was donated. Lights hung on large tripod “trees” facing the stage from only two directions at the back of the house. A large stage was built in the dining hall (with no backstage, only wing access) and theater productions began in December 2012.

“In the spring of 2013, a second location was opened for a downtown art gallery while monthly programming continued with art classes and four to six stage productions a year continuing at the church on State Street,” she said. “From Shakespeare to children’s productions, the theater was well-attended and the group continued to grow through all of 2014.”

In the fall of 2014, the Arts Center moved to donated space at Cayuga Community College at the south entrance to the city. The hope was that the better location would provide more visibility and opportunities to grow, Fox noted. The location was popular for theater productions with ample seating and parking, but there were no accommodations for classes and no storage, she added.

“Once again, the Shineman Foundation granted us an upgrade to our lighting system so we could get lights off the floor and hung on a grid overhead. A tech booth was built in and flame retardant curtains were added to the collection,” she said.

In late 2017, it became apparent the college was having issues with availability of the space and the Arts Center needed to find a new home. An empty downtown building became available and discussions began to purchase and renovate the building. Donors were secured and the building was purchased in June 2018.

“Renovations began immediately,” Fox said. “There were no theater productions or programming, except for Arty Camp, which took place in the downtown gallery during the eight months of renovations.”

By February 2019, a restricted certificate of occupancy was granted for building use on the first two levels. It was enough for the center to debut “Little Women” on the new stage. The old lights and sound system were installed and learning to work with the steeply angled, sloping roof line over the stage became the challenge. With barely seven and a half feet head clearance on Stage Left, any ‘second story’ locations, or the attic as called for in Little Women, had to be creatively designed.

A final certificate of occupancy was awarded later that year with the completion of a sprinkler system on all three floors and a wheelchair lift for lower level access.

“Over the next two years, we learned with each show and production — values greatly improved. Thanks to a state grant, the light system was replaced with an amazing state-of-the-art LED system that has more potential than our intimate stage with a sloping ceiling will currently allow.

“Our children’s theater productions grew to such popularity that more than 50 children typically auditioned for our annual junior production. However, our stage wouldn’t hold more than 30,” she said.

The successful theater productions were their single biggest source of earned revenue, helping to support other arts programming. A hearty concessions stand and creative basket raffles and fundraisers were a part of each production.

Groups were formed supporting other arts, a writer’s café, song circle for guitarists, a screenwriters and actors group for workshopping new screenplays, and more.

“We were within two weeks of opening a major musical production [“Children of Eden”] with a full cast of adults and children when the pandemic shut us down,” Fox said. “Our next junior production, “Frozen”, was cast and in full rehearsal. We immediately lost all income.”

While they waited for live theater to return, they used the time to finish projects in the renovation such as the finished buildout of the commercial kitchen space.

“Once we were allowed to reopen, we launched a small cookie shop to generate another revenue stream and hope to add cooking classes soon,” she said. “We have focused on developing our studio arts program with classes and groups and created regular opportunities for art vendors to show and sell their art. We launched a weekly outdoors arts market for sidewalk art sales.”

With the support of the Shineman Foundation once again, they secured a grant for a movie projection system.

“We can only seat 25% of the house, around 20 people per showing. But, it gets people into the theater again and provides another potential revenue stream,” she said. “We got a different grant to support the cost of movie rentals for a year, giving us time to build audience loyalty. We will offer movies at least monthly until we reopen for live performances.”

In the year prior to the pandemic, Fulton was the winner of the latest $10 million Downtown Revitalization Initiative. As a recipient organization, CNY Arts Center is poised to receive funding to raise and level the roof line over the stage, with the governor’s approval of their proposal.

“This project excites us for the improved experience we will deliver to audiences once our stage lights are at the correct height. Production values should grow exponentially with this improved shape and design of our stage,” she said. “We will also add much-needed programming space and even some balcony seating. We all miss theater desperately and have attempted some virtual events with less than satisfactory results.” As restrictions have eased, they’ve begun offering some events.

They have applied for a grant for crucial equipment to produce better quality live-streaming capabilities.

“I am surrounded by people who are passionate about the arts and about Fulton. They keep the momentum going. As a team, we have accomplished more than I could have hoped for or imagined! I mean, have you seen this place? It’s amazing! They are amazing!” she said.

“And, the blessing of the folks dedicated to the arts center means we are gradually putting qualified people in all the important roles such as artistic director of performing arts, artistic director of studio fine arts, cinema arts director, culinary arts directors, etc. etc. They are still volunteers, but working for the passion and opportunities to create and have a say in how the center is run. I’m now focused on securing the foundation of the center so we can hire a real staff including a professional executive director who can provide a great working environment for all these multi-talented people who inspire us to create art. But, the pandemic set us back a bit!” she continued.

Fox vowed to keep on going.

“Yes, I am old enough to retire. I do think about it. I didn’t technically enter the workforce full-time until 2011. So I’m just now at the 10-year mark — our 10th anniversary this year,” she said. “And, I miss doing art and creating art. But, the responsibility as executive director leaves little brainspace for creative thinking, especially at my age! Retirement will come when someone can take over.”