Chena Tucker was named director of the Richard S. Shineman Foundation on Nov. 1. The vision of the foundation is to become a “Catalyst for Change.” It’s a vision she shares.

“I’m getting my head wrapped around everything right now. We are going through our first grant round, so it’s been a lot of meetings with regional philanthropists, local nonprofits and community members looking for funds to support their missions and make a difference in people’s lives,” she said.

The grant funds that are awarded are part of an endowment. Richard Shineman was a professor at the college. After he died, his wife, Barbara, set up the foundation and invested the funds for this purpose.

Richard Shineman turned over his family’s fortune to make a positive change in this community — it is truly a debt of gratitude, Tucker said.

Did she give her successor any advice?

“I got one day of training. She and her husband, Jeff, were moving. The timing didn’t work out for us to do too much,” Tucker said. “Before that, I did work alongside Karen on several different initiatives and was on the receiving end of some foundation grants.”

From Oswego, Tucker graduated from Oswego High School in 1993.

She said she didn’t have any major in high school, “but I knew that I wanted to relocate and see what was out there.”

So, she moved to Oregon, and was there for 13 years.

“I went to school for interior design and was planning to finish my credits for a bachelor of arts in architecture at Portland State,” she said. “But, after 13 years, I decided to move back to here. Portland was getting crowded and expensive.”

While in school, she also took some business courses, “in case I decided to go out on my own,” she said. “I earned a certificate in business administration and once I started taking business courses, I really loved it. So I kind of shifted gears.”

When she moved back to Oswego, she started looking at local opportunities.

“I was hired at the college [SUNY Oswego] in the community relations and small business development center in 2011,” she said. “Before that, I dabbled a bit in freelance design work — but not much. This area does not have much of a market for interior design.”

While out west, she worked in the restaurant and hospitality industry to help put herself through college.

“That’s how I got by — paid the bills and paid for school,” she explained. “In Oregon, restaurants are required by law to pay servers minimum wage. And, the company I worked for offered health insurance and 401K — not bad for the service industry.”

The skills she learned working at the Office of Business and Community Relations at SUNY Oswego have helped her in her new job.

“Absolutely, we ran several distinct programs, worked with many nonprofits and managed grants and budgets,” she said.

Initially, Tucker’s first job at the college was a part-time position as a business liaison. 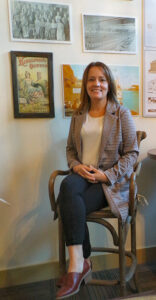 “From there, I was promoted into a full-time position as assistant project manager; then promoted to project manager, associate director, and lastly, director of the Office of Business and Community Relations at SUNY Oswego,” she said. “I rose through the ranks —all while earning my MBA while at the college.”

She oversaw federal and state contracts, grant development and management, and community engagement.

“We provided grant oversight, which gave me that background and I also managed the internal budget for the office. In addition, we provided professional development, training and strategic planning and facilitation,” she said. “We also worked on program development, community relations and government relations.”

She was a member of numerous committees during her tenure and remains on some today.

“I am still on some; but not all, some didn’t align with my new position. I’ve transitioned off those,” she said.

“I am sure I will add some more to the list in the coming months,” she said.

How does she find time for everything?

“That’s a good question,” she laughed. “You do the best that you can. There are times in life that are busier and hectic and times when things slow down a little bit so you can get caught up. You have to prioritize. It’s always a process. You have to make sure you get to the things that are the most important, that includes yourself — taking time to enjoy life.”

“For fun, I go hiking and on road trips. I spend time at the lake. I have a dog, Whitney — she’s a rescue. I love to cook. I read a lot and I’m taking a dance class!” she said. “What I really love is traveling. Travel has been a lifelong goal and something I always look forward to. I have traveled throughout the US and have just a dozen or so states I have yet to go to. I want to travel abroad. I was scheduled to go to China right before the pandemic hit, but that was canceled, obviously. I’ve been to Costa Rica and will be going to Thailand this February. I’ve decided to do more international travel — there is a big, beautiful world out there.”

“I’ve seen the dramatic impact that their support has had on the community. I want to help support that mission — help support nonprofits and address the critical issues in our community. Many of these are quality of life issues — from literacy and education to employment and training, arts, culture and recreation. There are so many,” she said.

There are a lot of different ways the foundation can effect positive change, she added.

“Since my position at the foundation was made public, I have received so much support and congratulations — I appreciate it,” she said. “This [job] is, you know, one of those dream come true jobs. What I value and the work that the foundation does are aligned, it’s meaningful, and I think this is a good match for me. I want to continue to support their mission — be a catalyst for change!”