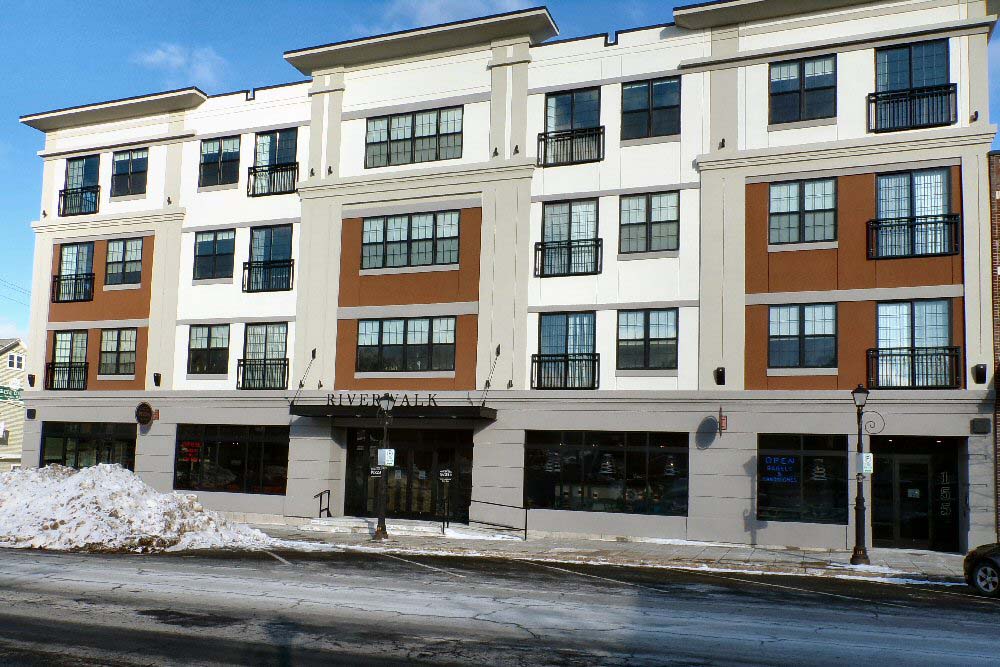 Façade of the Riverwalk Apartments and Restaurants on the west side of Oswego. According to Barlow, all units were filled within two months of the project’s completion.

Some 170 apartment units have been built in Oswego in the last two years. They ‘filled within two months,’ mayor says

The landscape of the Port City has been evolving over the past few years. New buildings are being constructed, seemingly overnight. Many are mixed use with retail and apartments.

For years, Oswego Mayor Billy Barlow has been asked: “Who is going to live in all these apartments?”

When Oswego won the $10 million Downtown Revitalization Initiative (DRI) award in 2016, city officials conducted a housing market analysis. They wanted to get “a true sense of the rental market, from experts,” the mayor said.

The analysis indicated that the Oswego market could support 900 new apartment units, both affordable and luxury, introduced gradually over 10 years.

Between the four DRI mixed-use buildings, approximately 175 new apartments combined have been and will be introduced over two years.

“That’s well under the 900 apartments gradually introduced over 10 years as the study suggested we could support,” the mayor pointed out.

The idea behind these new units is to give people more housing options, at a fair price, in an ideal location, he said.

“The tenants who have moved into LITATRO and Riverwalk are folks who have either moved into Oswego from outside the community, about half or so, along with other folks who wanted to downsize from a house or wanted to live in the downtown area opposed to a neighborhood or in the country and now finally have the opportunity to do so,” he said.

Other new sites, such as Harborview Square and Eastlake Commons, have waiting lists, according to the mayor.

They are currently coming online and providing quality, affordable units from $600-$1000 a month, he added.

“There is unquestionably a need and just as we expected, we’re seeing the new units become occupied with just the demographic of folks we predicted. The plan is working and playing out in real time before our eyes,” Barlow said.

Prior to the construction of these buildings, landlords controlled the rental market. Now, tenants can control the market and make the choice to live in quality housing at a fair price in an ideal location, he added.

This will make the rental market more competitive and will require landlords to fix up their homes and offer to rent them at a reasonable price, rather than leaving homes in subpar conditions and still charging high prices, according to the mayor.

“If anything, I see these new units forcing landlords to up their game and repair the homes they currently have. Otherwise, they’ll lose tenants to the nice, new affordable units,” Barlow said. “Plus, we still have our code enforcement holding them accountable. These new units are a win to downtown and the neighborhoods.”

Featured image: Façade of the Riverwalk Apartments and Restaurants on the west side of Oswego. According to Barlow, all units were filled within two months of the project’s completion.