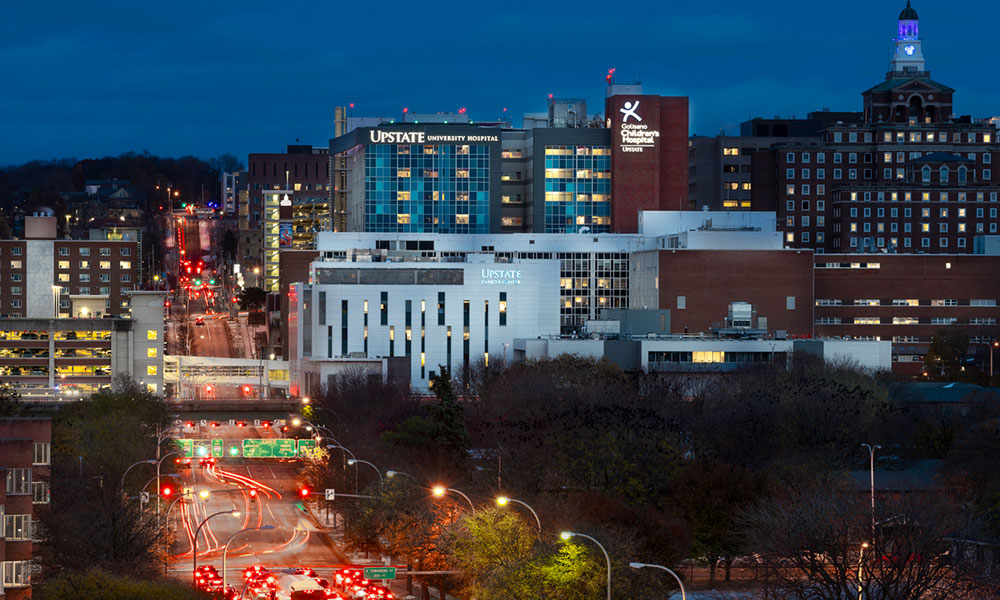 SUNY Upstate Medical University contributed $2.5 billion to the state and local economy and supported, directly and indirectly, more than 18,321 jobs across New York in fiscal year 2018, according to a recent study and report by a national consultant. It was published in January.

“Our mission is to serve and improve the health of this community. But as this report points out, we are also a vital player in this community’s economy — employing more people than anyone else and generating billions of dollars for the state and local economy each year,” said Upstate Interim President Mantosh Dewan, MD. “Our talented, valuable employees are investing their salaries into the Central New York economy, which plays a critical role in the vitality of the region and New York state.”

The substantial economic impact figure — which has grown 50% in a decade — includes capital improvements, Upstate expenditures and salaries to employees who spend their income on housing and services in Central New York. Additional dollars are generated by students, patients and visitors to Upstate, according to consultant Tripp Umbach.

The study looked at the economic, employment, government revenue and community impacts of Upstate, which is the region’s only academic medical center.

Highlights of the report include:

• One dollar of state support to Upstate generates another $58 in the state economy.

• Student enrollment at Upstate Medical University has grown 30% since 2006.

• Upstate is a considerable driver of tax revenues for the state and local governments. Tax revenues attributable to Upstate in the form of income taxes, sales taxes, real estate taxes paid was estimated to be $160 million in 2018.

“Upstate’s economic impact goes far beyond our payroll. We are constantly investing in our infrastructure and patient care and we use local goods and services that generate millions of dollars in state and local tax revenue,” Dewan said. “Our role in the SUNY system helps bring in state dollars that are valuable to the Central New York economy and stir additional growth, spending and economic prosperity.

“We are proud of the work we do to improve lives and now we know unequivocally that Upstate is an integral player in the local and state economy.”

Upstate’s commitment to research also translates to local economic investment. Upstate is entering its third year of near double-digital growth in annual research expenditures. Upstate’s clinical departments host more than 450 active clinical trials per year. The SUNY research expenditures of $35 million ripple across the state economy and generated an additional $20.7 million in indirect and induced activity.

The growing number of Upstate graduates has created a vast network of nearly 7,900 alumni nationwide. Those licensed physicians generate more than $24.8 billion in economic activity and support or employ nearly 132,354 employees throughout the United States.

As the region’s only academic medical center, Upstate’s mission is to improve the health of the community it serves through the university, a biomedical research enterprise, two-campus hospital, an extensive clinical network covering patients in 17 counties and other supporting entities.

As a public, nonprofit hospital, Upstate provides many safety net and one of a kind services, including burn and trauma care, to name a few.

Many Upstate programs and special services are supported by the Upstate Foundation, which manages 1,000 funds and endowments totaling close to $200 million in total assets.

The report also noted how Upstate employees give back to their communities through volunteer time and money to local causes. In fiscal year 2018, the value of that time and money contributes an additional $25 million in economic impact to the community. That total includes $9.7 million in direct charitable contributions and an additional $15.3 million in donations of time to local charities by students, staff, faculty, physicians, residents and Upstate families.