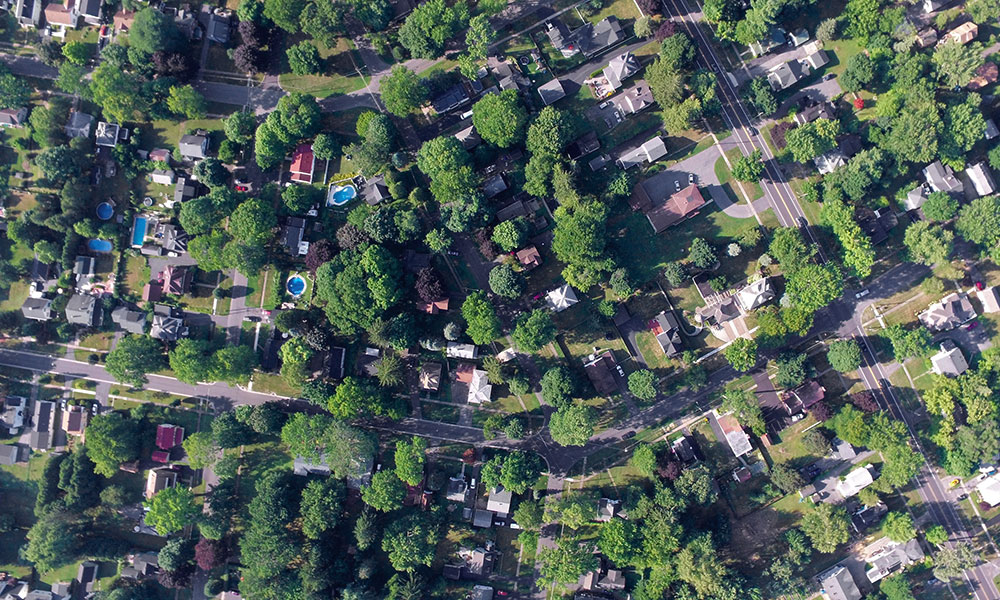 View of several homes in the village of Liverpool. Photo by Ken Sturtz.

Homes are selling faster and their prices have gone up substantially

Real estate sales in Central New York region have been one of the few bright spots during the pandemic, with prospective buyers coming here from other parts of New York and other states.

A recent report from Redfin, a national real estate brokering company, indicated that in the third quarter of 2020, Syracuse was among the top metro areas searched by prospective homebuyers looking to relocate.

Forty-six percent of those who used Redfin to browse Central New York houses were from outside this area, with the most interest coming from the New York City area, followed by Rochester, Washington, D.C., Boston, Buffalo and Seattle.

Recent data from the Greater Syracuse Association of Realtors shows that home prices are going up across the region. And, homes are selling faster. For the eight-county region (Cayuga, Cortland, Jefferson, Lewis, Madison, Oneida, Onondaga and Oswego), the average sale price as of Jan. 31 increased to $185,456 from $150,853 in January 2020, or nearly 23%.

“This is probably the largest median increase Central New York has ever seen,” said Tom Haggerty, a Century 21 licensed real estate broker based in Fulton.

The number of listings for the region, meanwhile, decreased to 609 in the first month of 2021 from 756 in January of last year. The inventory of homes in the eight-county region was down by 30% for that time period, from 2,185 in 2020 to 1,529 this year, according to the Greater Syracuse Association of Realtors.

Moreover, the average number of days homes remained on the market prior to sale also decreased, from 42 days in January 2020, to 29 days this year.

Data collected by the Greater Syracuse Association of Realtors shows that, across the region, home sales recorded on a weekly and monthly basis were consistently stronger compared to the same time period last year. In Oswego County, for example, 184 homes were sold for the first month of this year, compared to 136 for January 2020. And the average price increased from $125,900 to $138,500 in the same time period.

It’s a misnomer that property values are always increasing, even slightly. According to data from the Greater Syracuse Association of Realtors, the average sale price of home in Oswego County decreased from $115,500 in 2016 to $110,000 in 2017. For the same time period in Onondaga County, the average price decreased from $166,200 to $161,700. Now, the market is experiencing a huge rebound.

And lately, homes in every corner of Oswego County have been priced to sell at well more than their assessed values. The current listings range from a four-bedroom modular home on Pendergast Road in Phoenix priced at $167,000, or nearly double its current assessed value. In Altmar, there is a two-bedroom house on Salmon Road listed for $349,000, or $197,000 above its assessment. On Route 49 in Bernhard’s Bay, a two-bedroom home that is currently assessed for $74,700 is priced at $149,000. And in Sandy Creek, a three- bedroom home on the Lake Ontario waterfront is listed for $438,000, or $56,000 beyond its assessed value.

Haggerty estimates that for some of the most expensive properties in Oswego County, he received four inquiries in the past year from New York City residents looking to move here. One of them, a physician, viewed a home on Lake Ontario and seemed interested in making an offer. However, she had a change of heart and felt a responsibility to remain in New York City to continue fighting the COVID-19 epidemic there.

“I think the driving force here is still folks who move up from smaller homes to larger homes, so they still have elbow room to live work and play,” Haggerty said. “Someone may be looking for that extra area for an office or a recreation room.”

“Long-term, as far as how long this will last, it’s hard to tell,” Haggerty added. “It’s a very volatile situation.”

With mortgage interest rates at historic lows, realtors agree, now is a great time to buy. Around Oswego County and throughout the Central New York area there has been plenty of talk about new residents from downstate fleeing the post-pandemic chaos from the Big Apple and getting way more home for their money in these parts. But, the evidence of that is fairly anecdotal as records of home sales don’t show where the buyers came from. Home sellers are not allowed to disclose names due to client confidentiality expectations.

Chris Teelin, a licensed real estate broker and branch manager for the Cicero-North Syracuse office of Howard Hanna Real Estate Services, said it’s no secret that realtors throughout the region are getting inquiries not only from New York City, but also Boston, Washington, D.C., Connecticut, Jew Jersey and Philadelphia. This is not only because they can get more house for their money, but they also like the more distinct change of seasons here, our proximity to the Adirondacks and the Finger Lakes Wine Country, and the much shorter commute times.

“Your money goes further here for almost everything,” Teelin said. “And instead of commuting for an hour or two, you can go from one end of the county to the other in 20 minutes.”

Teelin said he worked with a couple that fled New York City during the pandemic and moved temporarily to rental property in the Adirondacks. They have family in Syracuse and are looking to move here.

“People are now realizing they can work remotely,” Teelin added. “We are seeing a shift toward a much larger remote work force.”

Realtors are also getting calls from Central New York natives who left the area decades ago to pursue career opportunities elsewhere and now want to come home. And as always, there has always been lateral movement, whether retirees looking to downsize or growing families that have been saving for a bigger place.

“It’s a wonderful time for first-time home buyers,” Teelin said. “For sellers, they have the luxury of multiple offers. It’s a hectic, but very fruitful market. I’d say it’s a win-win situation for everyone.”

“This is probably the largest median increase Central New York has ever seen,” says Tom Haggerty, a Century 21 licensed real estate broker based in Fulton, referring to the spike in prices of real estate.