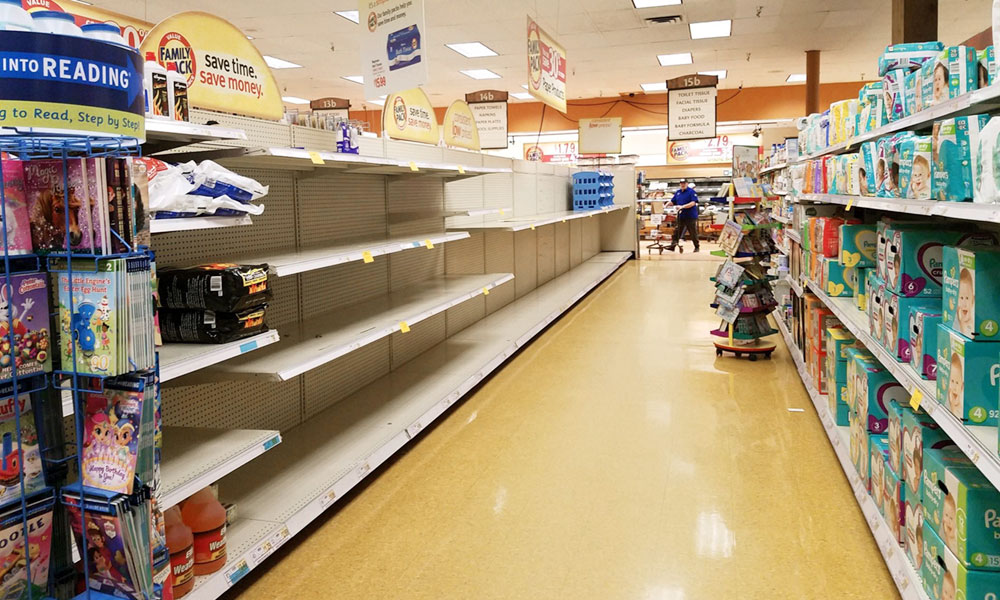 So now we have a coronavirus pandemic.

My wife Donna and I went shopping this morning to pick up a few supplies.

We first went for some Tylenol. There was a big vacant space where this used to be.

So we went for some lemonade mix. Looks like we weren’t going to get any of this either.

Then we proceeded to the pasta aisle. This was so empty that we heard an echo from the squeaky cart wheels.

So we decided to pick up some canned sauce and tomatoes to make some sauce for pasta we had at home. No luck there either.

This was getting ridiculous.

At least we could pick up some dried split peas and beans to make some soup. It turns out the soup was going to be very thin and bland because it would only contain water — there were no beans in the grocery store.

At that point it got fascinating to walk up and down the aisles to see what they did have.

There were three jars of peanut butter and four jars of jelly on the shelves. Canned soup was MIA unless you were looking for cream of mushroom.

We managed to get some mac and cheese. However, it had unicorn shaped pasta. In the canned meats aisle, there was no canned chili, corned beef hash or Spam. We did manage to throw some roast beef hash into our cart. We also picked up a can of Walmart brand spam and some canned chicken.

I’d never had any of this before but at this point I thought it was food we could eat if we had to. I don’t know what we would mix with the chicken because the canned vegetable aisle had as much food in it as a tire store.

If you like frozen Brussels sprouts, you were in luck. It seems that even during a pandemic, nobody eats Brussel sprouts. The bottled water aisle was as dry as a desert. However there was plenty of beer. Really? If my kids were going to be home, locked inside my house for a few weeks, I would stock up on beer.

Finally we went to the paper aisle to pick up some toilet paper, paper towels and tissues. All the shelves there were as bare as lady Godiva. I don’t know why there is a toilet paper shortage when we don’t have any food to eat.

This wouldn’t be our first panic over toilet paper. In 1973, consumers emptied stores shelves for a month due to rumors, fears and a joke. At that time, Americans were concerned about decreasing supplies of gasoline, electricity and onions. A government press release that warned about a possible scarcity of toilet paper created a lot of press coverage but no panic buying until Johnny Carson, the famous late night television host, joked about it in his monolog.

In the 2009 the swine flu pandemic lasted from early 2009 to late 2010. Globally, an estimated 151,700 to 575,400 people died from swine flu in the first year of the pandemic. As soon as the outbreak was announced, Mexico notified the U.S. and World Health Organization. Within a few days of the outbreak Mexico City was “effectively shut down”.

The HIV/AIDS pandemic (2005-2012) was first found in the Congo in 1976. HIV/AIDS has proven itself to be a global pandemic that killed more than 36 million people since 1981. Right now, there are around 31 to 35 million people that are living with HIV.

We had what was referred to as the Hong Kong Flu pandemic in1968. The first case was reported on July 13, 1968. It took just 17 days until outbreaks of the virus showed up in Singapore and Vietnam. Within three months it had spread to The Philippines, India, Australia, Europe, and the United States. While this pandemic had a relatively low mortality rate (.5%) it nevertheless resulted in the deaths of over a million people.

Then there was the Asian flu pandemic from 1956-1958.The Asian flu was a pandemic outbreak that originated in China in 1956 and lasted until 1958. In its two-year spree, The Asian flu traveled from the Chinese province of Guizhou to Singapore, Hong Kong, and the United States. The World Health Organization places the final death toll at approximately 2 million deaths, 69,800 of those in the US alone.

As of mid March, at least 4,226 people in all 50 states, Washington, D.C., and Puerto Rico have tested positive for coronavirus in the United States; at least 75 patients with the virus have died.

Unless you have been in a coma recently I think you have heard all the things you should be doing to protect yourself like frequent hand washing and avoiding crowds, so I am not going to rehash them here. Use common sense and stay away from sick people.

I have always said that the Russians, Koreans or even aliens won’t kill us off. It will be a tiny, little, unseen bug that will get us all.