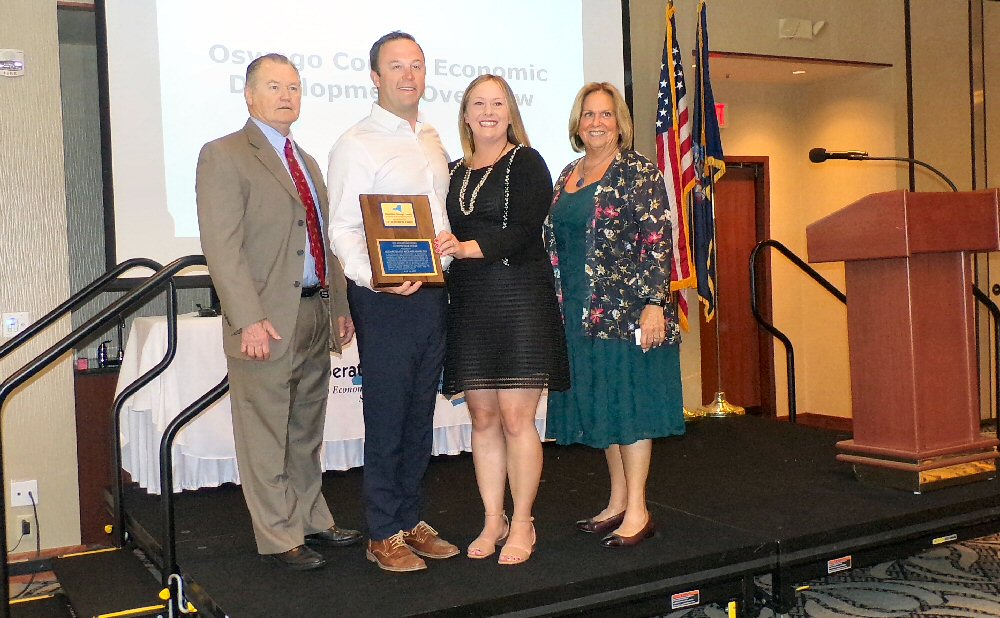 Operation Oswego County held its 70th annual meeting on June 16 at the Lake Ontario Event and Conference Center in Oswego. The in-person meeting was the first since the start of the pandemic.

Ellen Holst, president of the OOC board of directors, welcomed approximately 130 representatives of businesses, government, education, labor and other ally organizations to the meeting.

Keynote presenter Kristen Nelson, plant manager at Novelis Oswego, spoke of Novelis’ current expansion project, as well as its involvement with community partners for educational purposes in order to create a pipeline of eligible candidates for future employment.

“Our organization is people first. We believe that our people are our best and most important resource that we have at our company,” she said. “Programs like Workforce Development and CiTi’s P-TECH has a long history of mentoring manufacturing students.”

“A skilled workforce is critical to the success of a manufacturing business,” she added. “A strong manufacturing presence is vitally important to the overall economic development of our region.

“I’m proud to say we have hired 13 former P-TECH students into full-time positions at Novelis. And, we have another 10 that will be joining us this summer through internships

This creates a future for the student and it builds a continued stability for our community’s economy.”

Novelis was also instrumental in the development of the Advanced Manufacturing Institute at Cayuga Community College’s Fulton campus, she pointed out, adding, “There, students will engage in hands-on learning. They can pick up the skills that they need to hit the ground running at manufacturing.”

Novelis as well as representatives from Huhtamaki in Fulton will serve as advisors and mentors moving forward.

“That way we can make sure that our students have everything that they need to transition from the classroom to the workforce,” Nelson explained. “We are committed to continuing to support the development of the workforce … not only at our own facility but also for all manufacturing in our region.”

She recognized the other employers present and thanked them “for creating opportunities for the members of our community to have dynamic careers. We are best when we work together as a team; our greatest successes have come through partnerships with educators, community organizations and industry partners. Together we will build a thriving workforce in Oswego County.”

Michael Treadwell, executive director of OOC, reported that in 2021, projects assisted by OOC and the County of Oswego IDA resulted in the creation or retention of 289 jobs with more than $167 million in capital investment associated with 32 new, expanded or retained facilities.

Key projects were outlined at the meeting including:

Treadwell also outlined select future projects and initiatives in progress including the opening of the Cayuga Community College Advanced Manufacturing Institute at the Fulton Campus, potential funding opportunities in Round 12 CFA funding with the CNY REDC, the development of the COIDA Manufacturing Start-up Facility at the former Nestle site in the city of Fulton, the COIDA buildout of the Oswego County Industrial Park as a finalist in the EDA Build Back Better Regional Challenge, plus the expansion of Giroux Aeronautical, R&D Design and Associates, Eir Healing & Wellness, Highland Animal Hospital, Healthway Home Products and the startup Phat Guys Burgers.

The Ally Award for 2022 was presented to the Oswego County Airport in recognition and appreciation of the vision, commitment and leadership exhibited by the Oswego County Legislature to support and operate an outstanding general aviation transportation asset; for significant investments and improvements that have been made since 2018 or are in process including an 8,000 square foot terminal building, apron construction, eight-bay T­hanger, rehab of 4,000 feet runway 6-24, among other projects, representing a $6.7 million investment of which $4.9 million (73%) was secured via NYS DOT and FAA grants; for playing an integral role in helping to bring water and sewer infrastructure to the area and to the Oswego County Airport Industrial Park; and for being a vital and essential partner in economic development and tourism in Oswego County.

The Business Excellence Award for 2022 was presented to Menter Ambulance in recognition and appreciation for demonstrating outstanding leadership, adaptation and commitment in operating and expanding Menter Ambulance as a private ambulance service for Oswego County since 1952; for operating 16 advance life support ambulances; for being the primary EMS provider for nine towns, three villages and two cities in Oswego County; for employing more than 140; for establishing a new 5,600 square foot station in Oswego and doubling its station in Fulton to 14,000 square feet; for establishing an EMT academy to grow their workforce directly; and for being a vital and integral part of the County’s healthcare system.

The 2022 Jobs Award was presented to Novelis in recognition and appreciation of the significant contribution and economic impact of Novelis on the Oswego County and Central New York economies by investing $130 million to upgrade its Oswego operations; for increasing its hot mill capacity by 124,000 metric tons; for being the largest manufacturing employer in the county with 1,150 employees; for being the world’s premier producer of rolled aluminum and the global leader in aluminum recycling; and for its 60-year history of aluminum products manufacturing in Oswego County.

Elizabeth and Richard Hamilton received OOC’s 2022 Dee Heckethorn Entrepreneur Award in recognition and appreciation of exceptional entrepreneurial spirit, creativity and dedication for embarking on their dream of opening a winery; for establishing the Grace Tyler Estate Winery in Constantia and having its first harvest in 2017; for being the recipient of 15 awards at 10 wine competitions between 2017-2021 including four bronze, seven silver and four gold medals; and for enhancing the growing tourism industry on the north shore of Oneida Lake and in Oswego County.

Michael Pollock was honored with the 2022 Martin Rose Economic Developer Merit Award in recognition and appreciation of his outstanding record of exhibiting leadership, expertise, support and cooperation in advancing economic and community development efforts that have enhanced the business climate and quality of life in Oswego County and in Central New York; for his dedication and commitment to the financial services industry for 41 years; for serving as president and CEO for 28 years and being the longest serving president in Fulton Saving Bank’s 150-year history; for serving on numerous boards and organizations that are vital to economic development and the quality of life such as the United Way, Oswego Harborfest, Fulton Jazz Festival, CNY Art Center, Fulton Public Library, Oswego County Catholic Charities, Fulton YMCA, Cayuga Community College Foundation, Oswego County Goals 2000, Fulton DRI Planning Committee and serving for 20 years on the board of Operation Oswego County Inc.

“I want to thank Operation Oswego County for all the great work they’ve done over the years,” Pollock said.

He cited the leadership of L. Michael Treadwell. He also thanked Carol Rush who couldn’t attend the meeting. “She was a mentor to me and many other people, with respect to economic development and being involved in the community,” he said.

He had two balloons, to celebrate OOC’s birthday. He released one (helium filled balloon) which floated to the ceiling. “This is what happens when you have economic development,” he explained.

He let go of the second, partially deflated balloon, and it dropped to the floor.

“That’s what happens when you don’t. So keep that in mind,” he said.

The OOC board of directors also elected James Mason of the North Atlantic States Regional Council of Carpenters, Richard Weber of Bond, Schoeneck & King and Bill Carhart of the Oswego County Federal Credit Union for three-year terms to fill vacancies.

For more information about economic development services in Oswego County, call OOC at 343-1545 or visit www.oswegocounty.org