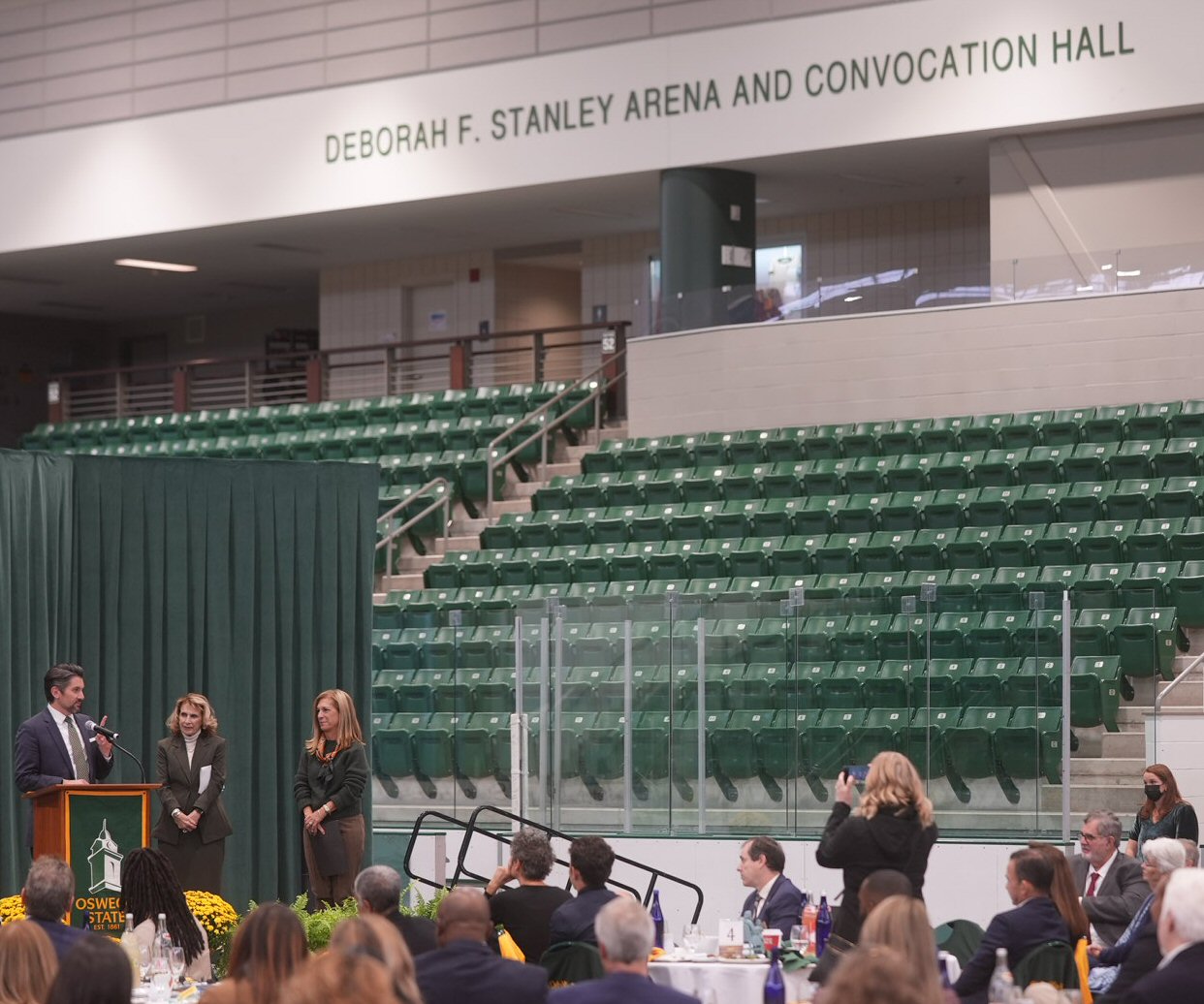 OSWEGO, N.Y. – Donors, led by the Oswego College Foundation board, have raised more than $2.4 million to name the Deborah F. Stanley Arena and Convocation Hall. College Foundation Board Chair Rose Cardamone Crane, an alumna from the Class of 1981, made the announcement earlier today (Oct. 1) at SUNY Oswego’s Founder’s Weekend luncheon — a celebration of 160 years of higher learning.
During the luncheon, the college recognized Stanley, who announced in May her intentions to retire in December after 26 years as president and 44 years at the college.

“This campus center, and in particular this arena and convocation hall, serve as the heart of the SUNY Oswego campus,” Crane said. “It is the place where students launch their academic careers during the annual Welcoming Torchlight Ceremony and where they conclude their careers during the annual Commencement ceremony. This arena is the most fitting space on campus to recognize the indelible impact that President Stanley has made. We want her contributions to SUNY Oswego to live in perpetuity in a space that she helped make a reality. I am thrilled to announce the naming of the Deborah F. Stanley Arena and Convocation Hall!”

The SUNY Board of Trustees approved the naming at its full board meetings earlier in the week.

SUNY Chancellor Jim Malatras shared his congratulations to Stanley, adding: “Throughout President Deborah F. Stanley’s 26-year history at SUNY Oswego, she has exemplified the truest definition of leadership, deep commitment to academic excellence and her students-first principle that she has lived by during her entire tenure. There is no better way to honor President Stanley’s legacy of accomplishments and love for the campus and its entire community than the naming of SUNY Oswego’s Arena and Convocation Hall after one of the most respected and admired SUNY presidents.”

SUNY Trustee Eunice Lewin said, “President Stanley has a longstanding history of advocating for students and offering spaces where they can realize their true potential. As one of the leading voices on critical issues such as mental health and wellness, the core of her partnership with the Board of Trustees was always student-centric. As the heart and soul of SUNY Oswego during her presidency, naming the arena and convocation hall after President Stanley could not be more fitting. Her leadership and dedication to students is a legacy that should continue to be celebrated.”

SUNY Trustee Robert Duffy added, “President Stanley has amassed a great depth of experience in higher education and fostering student success over the past 26 years. Her ability to partner both with SUNY Oswego and the community, specifically with local officials and businesses, made her a great fit for students as they developed gateways to professional success and personal growth. I congratulate President Stanley for her time at SUNY Oswego and setting the standard for ideal leadership on our college campuses.”

Early in her tenure as president, Stanley shared her vision for a student center and indoor corridor to serve as a main hub of activity that also provided an enclosed walkway to connect the campus, known for its formidable winters and winds off Lake Ontario. She also wanted the new campus center to contain space for student organizations, career services, experiential learning and an ice arena and convocation hall to make Laker athletic contests and large-scale concerts and cultural events more accessible to students. The vision became reality when the campus center opened in 2006.

“My gratitude to you, the faculty, staff, students and administrators; Chancellor Malatras and the SUNY Board of Trustees; members of SUNY Oswego’s College Council and our dedicated alumni and committed donors – many of whom serve on the Oswego College Foundation Board,” said President Stanley. “This building and arena, and what takes place in this wonderful facility, have always made me smile as they represent the vision and success an institution can achieve when we work together on behalf of the college and our students. Having my name attached to such a thriving college and community asset is an honor. I will treasure your collective recognition and generosity for the rest of my life.”

The multimillion-dollar gift establishes an endowed fund that will be used to keep the ice arena and convocation hall equipped with the latest technology and amenities.

“SUNY Oswego is better today because of President Stanley’s leadership and her contributions to the school overall,” said Bob Moritz, an alumnus from the Class of 1985, global chair of PwC, and Oswego College Foundation Board of Directors member. “From her years on the faculty through her leadership as president, she has led SUNY Oswego into the 21st century and positioned the school for many years to come. Her legacy will be one of growth, inclusion, excellence and care. Future students and visitors will see her name on the arena and know the huge impact she’s had on so many of us.”

Lead donor Jim Triandiflou, a 1988 SUNY Oswego alumnus and chief executive officer of insightsoftware shared, “President Stanley’s vision and ability to get things done over the past 25+ years has been exceptional. Her leadership has led to increased enrollment, higher academic achievement, more diversity, and a transformation of campus with the Marano Campus Center as a crown jewel. The students of New York are the ultimate winners! What a model of leadership President Stanley has been.”

The naming of the Deborah. F. Stanley Arena and Convocation Hall is one of the many highlights of the weekend, which will also include the college-wide Green and Gold Day Campus Photo, the groundbreaking on the $80 million Hewitt Hall renovations and the 1861 Giving Challenge, issued by Today show co-anchor Al Roker, Class of 1976. This year marks 160 years since the college was founded as a teacher training institution in 1861 by Edward Austin Sheldon. The weekend leads into Sheldon’s Oct. 4 birthday 198 years ago.

Coronavirus: The Sky Is Falling…