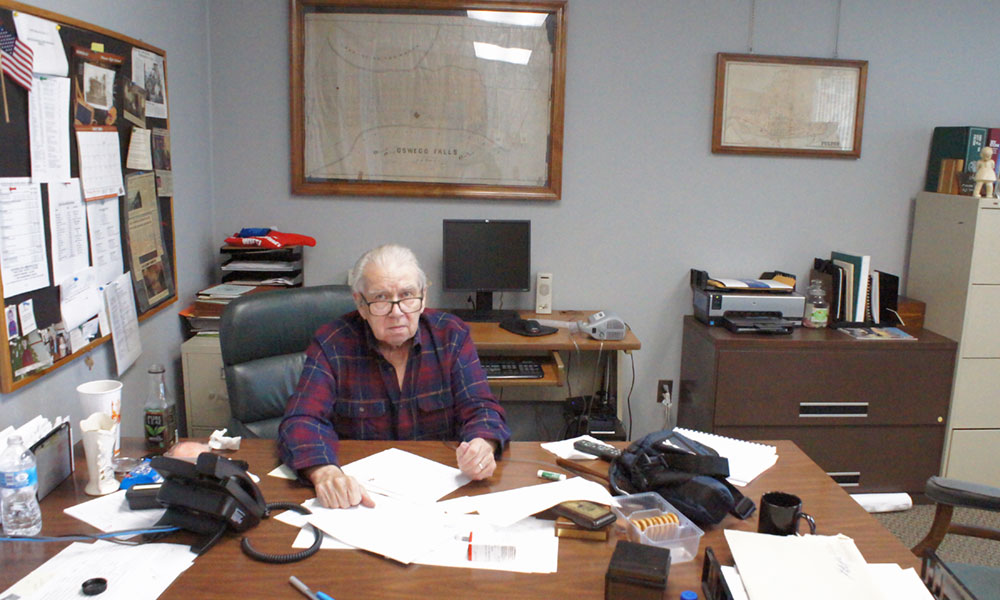 As he is about to leave office, Fulton Mayor Ronald Woodward Sr. reflects on his 34-year legacy and talks about the future of the city

1. What first got you involved in Fulton city politics?

I had been on the Common Council since 1982, and I got interested then with some of the things that were going on in city politics, so I decided I wanted to be mayor.

2. You ran for mayor back in 1985, were in the office for two years, and then there was a break before you ran again in 2008. Why did you leave the office, and why did you come back?

When I was first mayor, it was a two-year term, and I was also working full time for the Nestle Chocolate while I was in the office. I did the two years and chose not to run again then. And then in 2004, I was working for the Nestle, but that’s when they were going out of business. Daryl Hayden was mayor then, and he called me up and asked me if I wanted to be his executive assistant. I took the job, and that was a four-year stint. Then, Daryl decided that he didn’t want to run again, and so I chose to run again.

Mainly stability and experience. A lot of people look at Fulton in a lot of different ways. The reality is, it’s a $22 million corporation, there are three major labor unions in our city, and under the Taylor law, you are obligated by law to negotiate with fire and police force unions regularly, and then you have the Civil Service Employees Association. Experience helps. Plus, I was born here in Fulton, I’ve lived here all my life. I care about the city, and I want to do right by it.

4. What would you consider to be some of your greatest successes, while you were in office?

I had some bad things happen during my term, I’m proud of being able to keep the city afloat during the times when industries were leaving the state of New York rapidly. We lost a big chunk of business from Birds Eye Foods, Nestle, and out in Volney they lost the Miller brewery. That all affected Fulton, even the close of industrial companies outside the city, because a lot of the people who worked in those places lived here, paid taxes here. I think I’ve been able to keep things pretty stable, point the ship in the right direction.

5. What are some of the biggest changes you’ve seen happening to the city?

We never really had industry come in during my term — that was all leaving when I came in. But we’ve had quite a lot of small businesses develop in Fulton. We still have Birds Eye Foods, but in a different capacity. We recently annexed the waste treatment plant that was out in Volney, which was done because of the cost of waste treatment. That was a big cost for businesses and industry. That alone saved $160,000 a year — we passed those savings off to rate-payers. We were successful in getting North Bay campgrounds into the city, they were in Granby before. We also bought a dredge to clean up Lake Neatahwanta, which was a goal of many administrations before mine. I’m hoping that we’ll have most of that done before the year is done.

6. What do you think the reason for the huge loss in Fulton’s industrial base was?

You have to remember that companies like Nestle didn’t leave for another city in New York state. They left for a whole different state altogether. The two biggest things that I can see for why industry left is the cost of power, and the workmen’s compensation laws. Our workmen’s comp is among the highest in the nation. If you went to Wisconsin a few years ago, workmen’s comp was about $1,100 per year per employee. Here, it’s $10,000. So, you have to produce a lot of stuff, you have to make a lot of money, to make that cost up on your bottom line. And that’s just for one employee. And then they often move to places where you don’t have to deal with the harsh winter weather. Building maintenance in the Northeast is much more expensive than maintenance in the South. There are quite a few reasons for why industry left, but workmen’s comp and power costs are two of the main reasons I saw people leaving.

7. So, you see the state of New York itself as the reason so many industries left the area in the last few years?

They definitely create the policies that drive the economics of why people are leaving. They’ve been looking for tort reform on workmen’s comp for years, and we’re way behind the times on that. In order for industry to compete, they have to go to a place where they can actually be more competitive, and that just isn’t happening in New York right now. In the final years of Nestle, because I was actually one of the last two employees to leave when they closed here, their workman’s comp bills were huge. They actually had a company line that “accidents don’t happen, they’re caused,” saying that if you got into an accident, you’d get disciplined by the company because it cost them so much. And every case they had drove costs up, and it’s so easy to get hurt in a factory.

“I love this city and I’ll do everything I can do to help whoever wins succeed. I don’t care if they’re a Democrat or a Republican. I want the city to succeed. We’ve got some good things going.”

8. What do you see in Fulton’s future?

I think Fulton is recovering now. I’ve seen a big difference; we’re getting back a lot of our value now. We recently finished tearing down the old Nestle site, that’s open for development and we’ve already got Aldi’s in a space freed up by the demolition. I just met with our chamberlain about a new outfit that’s coming in, Charter Communications. We’ll fill that in, but it’s not going to be heavy industry that goes in there, those days have passed, by and large.

9. Why did you choose not to seek re-election this year?

A: Well, I’m 74 years old and I’ve been doing this for 34 years in some capacity or another. I need to spend some time with my family, and I have some health issues. It’s time for some new people to come in and bring some fresh ideas.

10. What does the future hold for you personally?

I’ll be focusing on spending time with family and on my health. However, I’ll be mayor till the end of this year. I love this city and I’ll do everything I can do to help whoever wins succeed. I don’t care if they’re a Democrat or a Republican. I want the city to succeed. We’ve got some good things going.

How COVID-19 Has Changed the Restaurant Industry