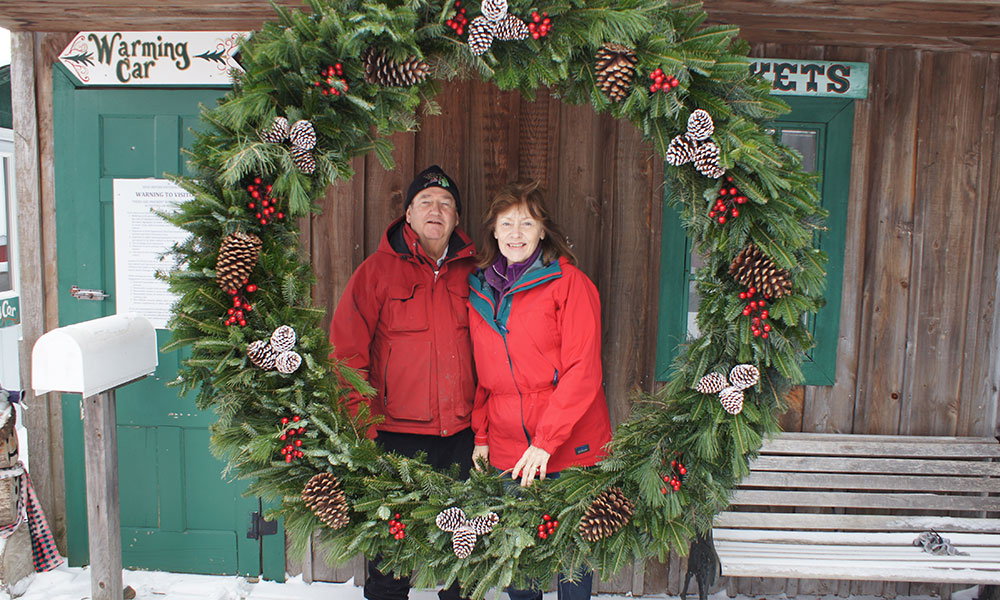 Jack and Faye Beckwith started planting Christmas trees on their farm at Mill Street in Hannibal in 1985. However, the farm did not start selling trees until 1995.

The Beckwith Family Christmas Tree Station has been a part of many Central New Yorkers holiday traditions since it opened in 1995, and owners Jack and Faye Beckwith say they feel blessed to be able to be a part of the season for so many.

Faye says that the station’s customers come from all over Central New York, some coming from as far away as Skaneateles, almost an hour drive south of Hannibal.

“People will drive quite a long distance to cut a farm-fresh tree,” Faye said.

Part of what makes the Beckwith Family Christmas Tree Station special is that the trees at the farm are not planted according to age or size. Rather, young trees are planted wherever there is space among the older, larger stock.

“I think people like having the trees mixed up like that. It makes you feel like you’re out in the woods, and you have a lot of unique options to choose from,” Jack said.

The farm sells a variety of trees, ranging in price from $50 and $150 depending on the size. Some are more popular than others. Jack says that many people choose the Frasier fir trees because they hold onto their needles for longer than many other varieties of tree. Another popular choice is the concolor fir, which has a silver coloring to its needles.

The Beckwith family moved to the tree farm on Mill Street in Hannibal in 1980, where they raised their daughter Noel and their two sons, Jack and Scott. Faye says that her husband got interested in planting and caring for Christmas trees from right after they married. Jack was working as a barber at the time, which he still does on the side. He has a small shop on the farm.

“When we first married, a barber shop customer had some trees, so Jack would get some and plant them in our front yard,” Faye said. “He had the bug early, for sure.”

The first trees for the farm were planted in 1985. However, the farm did not start selling trees until 1995, because it takes a decade to grow a tree to the right size and shape to be a Christmas tree.

When putting the tree farm together, Jack and Faye decided to include some of Hannibal’s railroading history.

“About a half mile down the road was the Hannibal train station,” Faye said. “Of course, we weren’t alive back then, but we’ve been told that there were as many as 12 trains a day that stopped there at one point. Jack’s always been interested in that.”

There are two mock-cabooses at the front of the farm. One is the Warming Car, where customers can rid themselves of the winter chill, and the other is the Christmas Caboose, the farm’s gift shop. Jack built them on the farm in the style of a 19th century train caboose, using the real base of a train car, called a truck.

The tree farm is a family affair for the Beckwiths during the winters. During the selling season, all three of Jack and Faye’s children get involved, as well as their grandson. Jack, Scott and the Beckwith’s grandson all drive tractors to bring people to select their trees and assist in cutting the trees. Noel helps out with the cash registers and the gift shop.

Jack and Faye say they have a personal goal to sell 1,000 trees per season, which they have yet to achieve. Faye said they came close to that goal a few years ago, but personal concerns have gotten in the way of the planting season for the past few years, so they are not sure they will meet that goal this year. They know that they’ll sell at least 500 trees this year though, as they must in order to stay involved with the national Christmas Tree Promotion Board.

Jack said that his favorite part of owning and working on a Christmas tree farm comes in the summertime, when the warm weather and sunny conditions allow him to work outside, shearing the trees. He says that the air quality is noticeably better than elsewhere, and the peace of being someplace very close to a forest is comforting.

As for Faye, her favorite part of running the tree station is helping families connect and watching children thoroughly enjoy themselves.

“In this day and age, when kids are sitting with their phones playing games, watching videos and people are watching TV and getting so involved in media,” she said. “It’s nice when a family can come out and just have a day together.”

The Beckwiths expect to have the farm open until Dec. 22, the Sunday before Christmas — or until tree supply lasts, which may come before the expected closing date depending on demand.