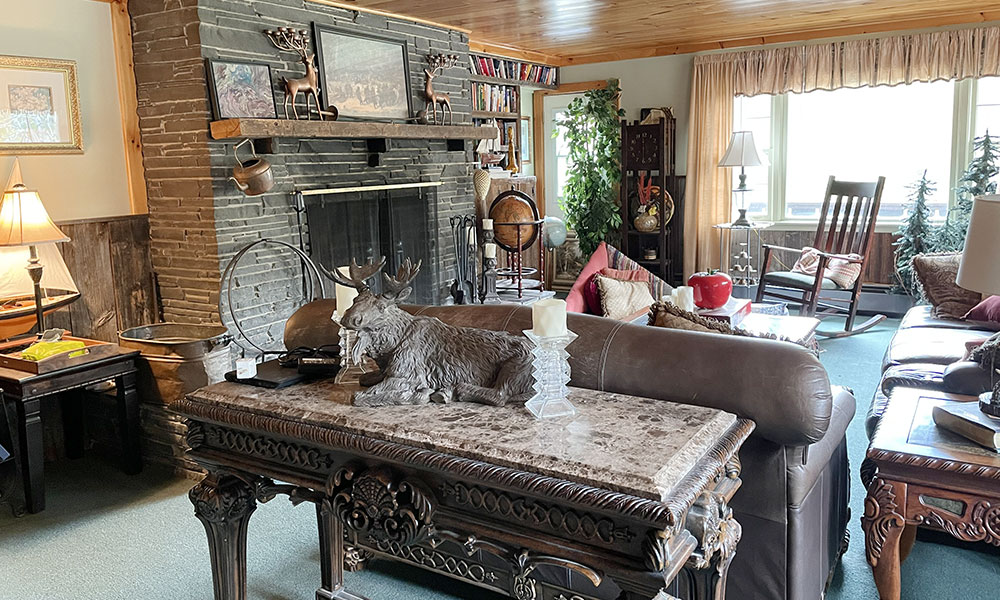 Allison Livesey knows a few things about operating a restaurant. She’s part of the family, now in its third generation, who’s been running Rudy’s Lakeside Drive-in in the town of Oswego on the shore of Lake Ontario for decades.

She decided to bring some Rudy’s Lakeside flavor to the Adirondacks.

She opened a bed and breakfast with a pub. The B&B is called Chalet Whiteface (chaletwhiteface@yahoo.com). It is a cozy mountain chalet in the High Peaks of the Adirondacks.

“We are a large bed and breakfast with 10 guest rooms and a pub called Rudy’s Scar Bar and Grille; a spinoff of our mothership in Oswego Town, New York, Rudy’s Lakeside Drive-In,” she added. The bar got its name from nearby Scarface Mountain in Lake Placid.

Wilmington neighbors the Olympic Village of Lake Placid and Ausable Chasm, the ‘Grand Canyon of the East.’ 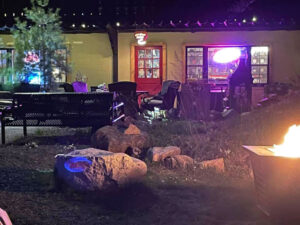 Livesey said it took “a lot of blood, sweat and tears, a SBA loan and a fabulous business plan” to get started.

After growing up with the Rudy’s Lakeside business, Livesey said opening up a place of her own in the Adirondacks was a chance to springboard off the original idea and have some flexibility to change things up a bit.

“It was time to do something for myself. My faithful, dedicated and hardest working partner, Scott Goewey, and I had both been working for decades in food service and we felt we had some great ideas and insight,” she explained. “We were excited and motivated for the great adventure to create something new…we still are, four years into this project! Even with the exhaustion, drama and demands it’s worth it…for now!”

“We adhere to the highest level of cleanliness. Everything gets changed between lodge guests,” she said.

She grew up in Oswego through grade nine.

“I was blessed with the opportunity to experience boarding school near [Washington] DC and then eventually university abroad. I spent 25 years mostly away before returning to New York after my second child was born and my father, Brad Livesey, passed,” she said.

She went to school, snowboarded, traveled far and wide, and worked a bit in interior design, as well spending time in Oswego most summers, doing ‘back of house’ work at Rudy’s and creating and launching spice bag sales.

“My jobs during school ranged from dishwasher to sales clerk to ice cream scooper. In our early branding days at Rudy’s Oswego, I created the now familiar Rudy’s fish logo, with the help of Ellen Wahl’s savvy editing,” she said.

Upon her return in 2004, she restructured Rudy’s dessert menu into an ice cream/dessert stand and “stepped up the spice business launched by myself and my father years prior,” she said, adding, “I still maintain the spice bag production and sales.”

She and her father, Brad, marketed spice packets for people to create their own Texas hots at home. They also sold the packets at area shops and grocery stores. 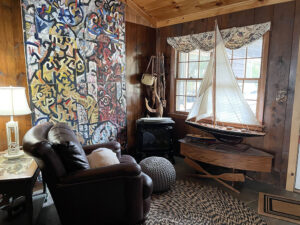 In addition to the spice bag business that they continue to sell to a handful of grocery stores and farm markets, she produces and supplies the wholesale spices to Rudy’s Oswego, Rudy’s ADK [that’s us, she noted] and Maui’s Dog House (as seen on the Food Channel’s “Diners, Dives, And Drive-Ins”).

It is the base of much of what she serves today. However, the new venture’s menu doesn’t duplicate Rudy’s Lakeside’s menu, she said.

“In the ADK, we have a modified Rudy’s menu, with a handful of new proprietary favorites in the North Country,” she said. “We have added chili with beans, lobster, bacon, steak, meatloaf, shepherd’s pie. We make our chili, shepherd’s pie, and meatloaf from scratch.” There’s a hint of spice in every dish, she added.

They buy and prepare fish the same way as Rudy’s Drive-in. Their chicken is fresh and organic. They marinate and bread it themselves. Beef comes from fresh local livestock farms and is used for all of their creations. 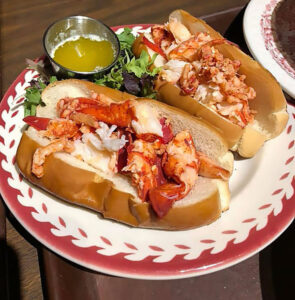 “We have much love for food and pride in providing a superior product and experience,” Livesey said. “Our food is mostly fresh and cooked to order.”

After acquiring the building in 2016, and then a year of renovations, Livesey said the business started taking shape. They had a soft opening in January 2019.

By June, they were open.

Prior to the pandemic, there were many international travelers visiting Chalet Whiteface. The virus caused “text book stress and drama that feels like we could break on all fronts. We recognize this and are able to cope and carry on,” she said.

Now, travelers from some neighboring towns and elsewhere around the state have started coming in.

“We were very busy, very busy, over the Fourth of July holiday,” she said “A lot of people are getting out and going places now. 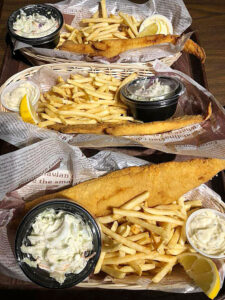 “The ADK is a magical place; unique, awe inspiring, international draw and supported by truly fantastic local communities. The High Peaks specifically because of the Olympic region and the varied and plentiful attractions in the area. We’ve seen a steady increase over the past three years of operation. We are gaining a following rapidly, we’re racing to keep up. It has been difficult to get consistent help.”

She added that she’d like to hold festivals, like Rudy’s did back in the day. “I want to do that here, too,” she said, adding that they have music some Saturdays in the bar; but due to the pandemic, it’s only solo acts. They would have plenty of room for events, thanks to a park-size property on which to frolic, she said.

That’s the best part of her job, she says is the live music, welcoming atmosphere, satisfied and grateful customers.

If she wasn’t doing this, she said she’d be doing the same thing; “perhaps on a smaller scale, with more art and music.”