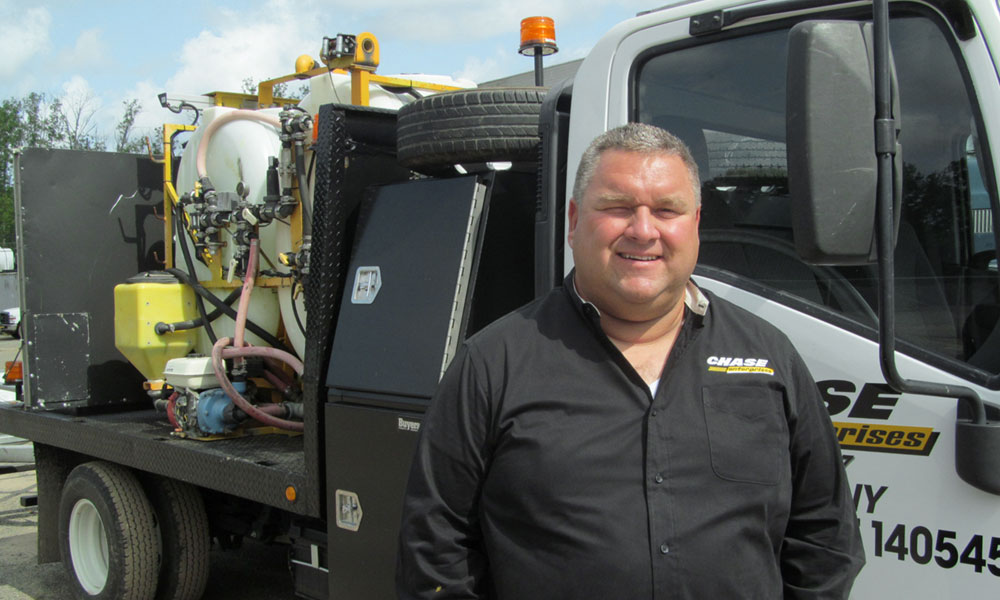 Allen Chase, president and founder of Chase Enterprises. The company has seen more than 600% increase in business over the last five years. Based in Oswego, the company is now doing business in Ohio, West Virginia, Iowa and other states.

When Allen Chase decided to delve into providing herbicide application services, little did he know it would lead to a remarkable 600% increase in business over the last five years.

The commercial property maintenance and construction company has taken off in recent years after entering the vegetation control business.

In the past, Chase Enterprises provided a wide range of services related to commercial maintenance.

Chase addressed the keys to acquiring these contracts.

“We design and build our own application equipment. Our shop in Oswego has built and maintains a fleet of over 150 specialty vehicles and equipment specifically built for the work we do,” he said.

Chase said this approach allows the business to control costs and add efficiencies into its equipment designs, giving it a competitive edge. The business has grown to feature a fleet of about 150 fully equipped vehicles and employs well over 100 people.

Chase said the business is continuing to look at new markets and expects a 20% to 30% growth over the next several years.

“We are looking at opportunities up and down the East Coast,” he said.

Chase said the business was generating at or below $1 million in revenues a year from 2001 to about 2014.

Since then, the business has grown significantly each year, finishing 2018 at about $6 million in gross revenue.

Its headquarters, however, is and will be in Oswego where all vehicle, equipment, maintenance and administrative details are taken care of, he said.

However, due to its outreach into other regions of the country, Chase conducts field operations in several other states.

Each field office supports a crew of 20 to 30 people with an area manager and several crew leaders.

Field offices exist in Philadelphia and Pittsburgh in Pennsylvania and Davenport, Iowa. Its Pittsburgh field office supports work in Ohio and West Virginia.

Recent outbreaks of invasive species has further driven growth with nuisance plants such as water chestnuts threatening to choke off rivers and impede boat traffic.

Also, giant hogweed is dangerous and can cause severe burns.

“Through the use of responsible herbicide applications, DOTs have been able to reduce their budgets while keeping motorists safe,” he said.

State DOTs are contracting this work out because of the specialized training and equipment needed to meet regulations.

Also, states are returning to the use of herbicides to remedy the issue of invasive species.

“My skill set as president and founder of Chase Enterprises is largely rooted in designing, building equipment and doing the work,” Chase said. “Our rapid growth and expansion into other states has brought a need for a much different skill set.”

Trimble brings a diverse background with him. He is primarily focusing on business development.

“Planning, finance, compliance issues, training, and risk management are all subjects that Barry is well versed in and are becoming more important by the day at this company or any company,” Chase said.

Trimble began working for Chase Enterprises about five years ago as a consultant.

“At that point, we had just expanded into Pennsylvania and were experiencing our first big growth spurt,” Chase said.

Trimble was instrumental in assisting the company as it navigated the many issues that came with rapid growth.

As vice president, Trimble will continue his role of guiding the expansion.

“Hiring employees has proven to be one of our largest hurdles,” he said. “Low unemployment rates and a strong economy have made it tough to fill our needs as a result of expansion.”

Of particular difficulty are filling middle management positions in Oswego.

“We are looking for middle management personnel who are able to think outside the box and work through problems,” Chase said. “With our crews working in various states, it’s difficult to have everything or everyone where they need to be at the right time.

“Having managers that can problem-solve by thinking on their feet is important in our line of work.”

Chase said the work his business offers is a deep-niche service.

“Finding employees with experience in our line of work is not practical, so we have not made that a priority when we are hiring,” Chase said. “Individuals with a strong work ethic, organizational skills, a positive attitude and good mechanical aptitude have proven to be our best hires. We provide the training necessary for our type of work,” he added.

The business has purposely developed its fleet to be primarily non-CDL trucks in hopes of making it easier to find drivers.

“This has been somewhat effective, but hiring personnel, especially drivers, remains our most significant challenge,” he said.

Chase said fueling the problem are federal and state regulations as well as insurance requirements that continue to be more stringent, making it harder to find viable drivers.

Tully’s Plans to Open in Oswego in February