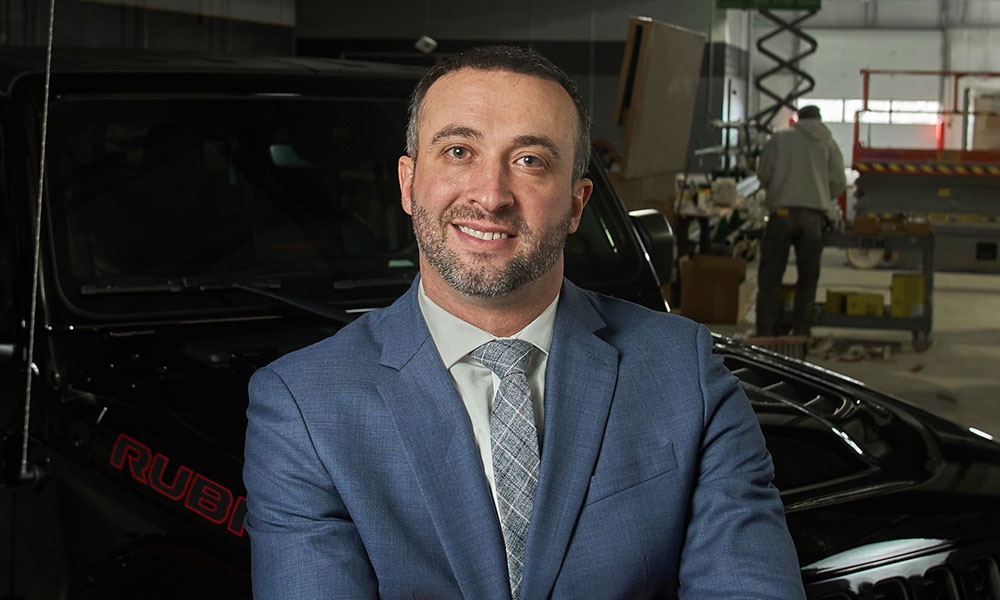 Rich Burritt on Jan. 14 at the construction site of his $10 million expansion project in Oswego, which will include a new Chrysler Dodge Jeep Ram dealership. Photo by Chuck Wainwright.

Rich Burritt, fourth-generation owner of Burritt Motors in Oswego, brings a taste of Disney magic to the automotive sales world

Choosing Walter Elias Disney (1901-1966) as your role model in the business world is similar to a trip to Walt Disney World Resort.

It’s an extraordinary journey toward success.

As a legendary film producer and pioneer of the American animation industry, Disney holds the record for most Academy Awards earned by an individual, having won 22 Oscars from 59 nominations.

The automotive sales industry is anything but an amusement park. But for Richard A. Burritt, president of R.M. Burritt Motors Inc. and Burritt Chrysler Dodge Jeep Ram in Oswego, applying Disney’s time-honored business principles has served as a catalyst toward reaching the next level.

Burritt is a student and avid supporter of the Walt Disney method. He has embraced Disney’s emphasis on building a performance-driven culture.

At the heart of the Disney approach is creating an experience that is unparalleled while achieving both employee and customer satisfaction. Burritt essentially has adopted the Disney mantra that if you take good care of your staff, they will take good care of their customers. This ultimately leads to repeat business as well as referrals.

Developing or acquiring new businesses is the typical approach in this growth strategy, and the 36-year-old business owner has taken notes.

Burritt Motors is constructing a $10 million expansion that includes a Chrysler Dodge Jeep Ram dealership, a stand-alone collision and accessories center, a touchless car wash, a detail center, and a number of other upgrades on its 15-acre site. The business will also be installing spray-in truck bedliners.

It is located between the Chevy-Buick store and Lake Ontario Prompt Medical Care along state Route 104 East in Oswego.

Burritt has realized steady growth since he took the reins at Burritt Motors in 2006, and strives to grow by at least 15% annually.

Burritt surpassed $100 million in sales in 2019, the first time the business has hit that mark in its history.

Using 2006 as a benchmark, Burritt Motors has sold on average 45 vehicles per month. This has grown at an average annual rate of 15%.

Burritt Motors sold on average 220 vehicles per month in 2019.

“The objective is to continue this growth and to reach 300 vehicles per month,” Burritt said. That would figure to 3,600 vehicles per year in the next three years.

During the first year running the Chrysler Dodge Jeep Ram dealerships store on West First Street — the former Shapiro Motors — in 2018, Burritt more than tripled business there. He leases that space, and the building is presently up for sale.

Burritt graduated with great distinction in business administration and technology management and was an Academic All-American lacrosse player at Clarkson University in 2005. In 2007, he was a top scholar at the National Automobile Dealers Association Academy.

Burritt is the fourth generation of his family to run the business. That’s a rarity: Less than 4% in the industry make it to four generations of family ownership.

Rich’s father, Chris Burritt, became president of the dealership at the age of 24, the youngest in the state and one of the youngest in the nation. He was ushered into the top spot when Rich’s grandfather — Richard M. Burritt — experienced health issues. The founder of the business was Elmer O. Burritt in 1955.

Chris attended Northwood University, a foremost institution in automotive marketing and management, and ran the dealership for nearly 40 years.

Burritt said he watched his dad’s career and how he navigated through both good times and bad.

“If you can survive in your weakest moments, you can thrive in your best,” he said.

While Burritt enjoys being around vehicles, his passion really lies in successfully running the business.

“I’m a numbers person. I’ve always said, ‘Each number tells a story. I just want to be the best author I can be,”’ he said.

Burritt familiarized himself with the business at a young age and was selling cars at 16. At 17, he was a service adviser working with customers.

In addition, he took advantage of many training opportunities during his high school and college years, traveling with his dad to various seminars.

Burritt said his father taught him to study and evaluate a person’s psyche and to avoid dealing with situations on an emotional level.

He also emphasizes the use of servant leadership, where the main goal of the leader is to serve. The business leans in a different direction from traditional leadership models, flipping the typical pyramid model into a reverse hierarchy instead.

Burritt said his wife Britanee and son Brogan provide a good support system as he seeks to create a comfortable work-life balance.

He usually features three big sales a year in March, June and September. During those sales months, he tirelessly works every weekend from open to close.

However, during the other nine months, he makes sure to give more of his weekend time to family.

Chevrolet, an automobile division of General Motors, has had a longstanding bond with Disney, and at one point required their dealer operators to attend the Disney Institute, a professional development and business consulting division of Walt Disney Parks & Resorts.

“My dad went and brought back a wealth of information regarding sustaining performance excellence and leadership,” Burritt said. “It really struck a chord with me.”

Since Rich Burritt took over his family dealership in 2006, the business has grown by at least 15% every year. In 2019, it surpassed $100 million in sales, the first time the business has hit that mark in its history.

While most of the dealers who attended thought it was merely a requirement, Burritt embraced the approach and how his business could gain from it.

“It really changed how we operated and look at things. It’s about leading and sustaining a service culture,” he said.

Burritt graduated from the Disney Institute, and has developed a handbook and curriculum around what he learned for his own staff.

“We put every single one of our employees through our own Disney class and go over core values, history, how to think, how to lead a sustained culture and leadership excellence,” he said.

Burritt said leadership “can happen at any level of the organization, whether you are a detailer or a manager.

“They can be leaders, and we try to encourage those characteristics. Our success would not have been possible without the hard work and dedication of our entire staff and leadership team,” he noted.

“Disney believes in doing everything 1% better,” said Burritt, noting the approach places a premium on showmanship and experience.

The Disney model looks at every aspect of a particular business before determining how to make it more efficient, create more value, and emphasize showmanship, safety and quality.

“They dissect everything we do, and determine how we can make every bit of that better,” Burritt added.

All about the experience

The culture that Burritt has created is performance driven, but he also strives to empathize with his employees through measures such as an open door policy.

“If employees can make a difference, it will impact them and the lives of those around them,” he said.

Burritt pays a percentage of net profit to his leadership team as added incentive to excel. He also sees each of his departments within his business as breeding grounds for employees to learn and advance within the system.

For instance, once detailers gain experience, they can advance into rust proofing and installing spray-in bedliners, and potentially become painters capable of working on customer’s cars.

“I have created a system where people can start at any level and work their way all the way up,” he said.

Burritt said he credits his family background with his strong work ethic, noting his mother’s side operated farms.

He also credits his athletic background with feeding his desire to be competitive. He played football and lacrosse at Oswego High School and is a member of Clarkson University’s all-time lacrosse All-Stars.

“We want to win. I’m not here to come in, sit back and relax. I’ve never called in a day of my life and I’ve never missed work from being sick,” said Burritt, noting he was the same way as a youth in school.

Burritt noted his most significant risk is competing against digital dealers who do not have a brick-and-mortar presence.

“Our biggest risk is competing against someone who didn’t spend $10 million” to build a new store, he said.

Burritt is still married to the brick-and-mortar method, although he mentioned that without diversification, it would not work.

“You need to push every button at the same time,” he said.

In terms of competing online, Burritt said, “if you are not in it, you can’t compete. It’s really that simple.”

He said 90% of people are shopping online. “We all do research online and you are in a small percentage if you do not,” he said.

When consumers used to visit up to eight dealerships to find what they want, now that number is 1.6.

“We focus on what’s important to customers. Besides sales, we offer service, financing, a body shop, car wash, rust-proofing center, detailing, parts and accessories, and have a Locavore food truck coming soon,” Burritt said. “We provide whatever they want. As long as we have everything available, I think that we win in the end.”

“The price you see is pretty much the price you pay. There is little margin built into it and it is very transparent,” he said. Burritt also features a price-match guarantee on service and everything it sells.

Burritt uses several different forms of artificial intelligence, systems that feature software that works 24-7 understanding the needs and wants of consumers. Conversica, a cloud software technology that focuses on customer experience, is popular in automotive circles.

“As long as you are providing a good experience, then typically they will come in or call in,” he said.

He has taken on leadership roles in many organizations, including United Way of Greater Syracuse, YMCA, the Center for Instruction, Technology & Innovation, Oswego Industries, and Oswego Youth Soccer and Little League.