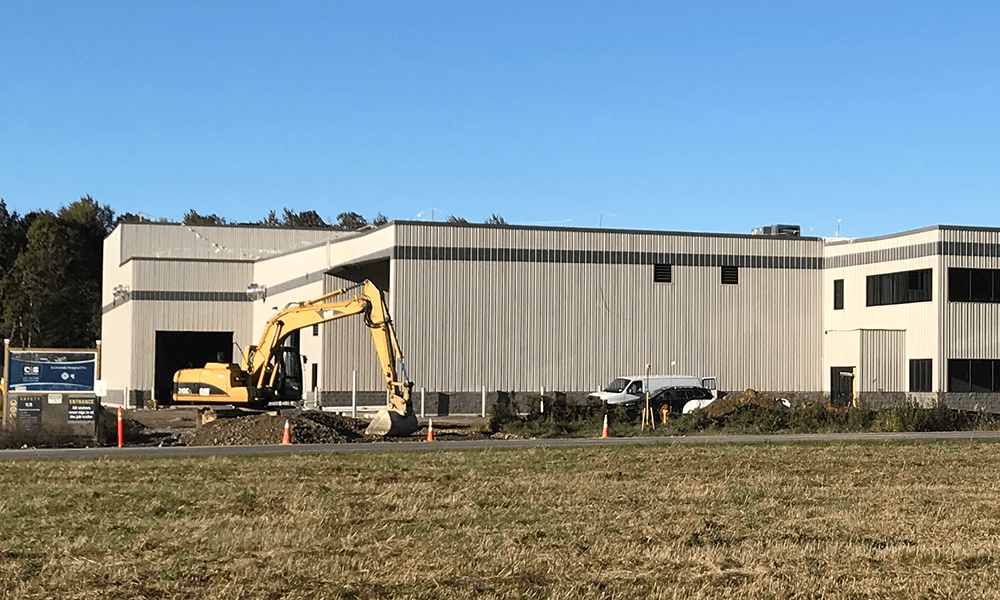 Headquarters of the E J USA in the Oswego County Industrial Park in Schroeppel, photographed in November. The company will officially open in early spring. Photo provided.

A leading-edge manufacturer of infrastructure-related products is being transplanted from Cicero in Onondaga County to the Oswego County Industrial Park in Schroeppel.

In the spring of 2018, EJ USA, Inc. broke ground for the construction of a new fabrication facility in Oswego County. Construction on the new facility was wrapping up in mid-January.

The new $9.1 million plant fabrication project consists of an approximately 71,300-square-foot facility on a 16-acre site. The facility will produce steel and reticuline drainage frames and grates, and steel and aluminum hatches.

Full production is expected to begin in early spring.

External work needs to be attended to once winter breaks, but the facility is ready to roll, according to L. Michael Treadwell, executive director of Operation Oswego County and CEO of the County of Oswego Industrial Development Agency.

Initially, plans called for a 65,000-square-foot building, but those expanded when EJ decided to also make it the Northeast hub for logistics and distribution.

“There could be big growth in that market for them, and they are going to be positioned in the Northeast to handle that from this facility,” Treadwell added.

The company has established a strong brand presence in the U.S., Europe and Asia-Pacific by providing high-quality products that meet specific local requirements throughout the world.

“In addition to producing standard products, we are the leader in producing ‘innovative’ products,” said Tim McKernan, facility manager for EJ.

EJ’s manufacturing facilities produce all its “Made in the USA” products from various materials, including gray and ductile iron, composites, aluminum and steel. 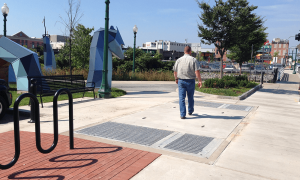 With a growing market, EJ leaders made the decision to discontinue operations in Cicero and construct a new fabrication facility to improve efficiencies, upgrade operational flow and bring its manufacturing, engineering, sales and distribution operations under one roof.

The building brings together fabricated products manufacturing and engineering groups, and its New York sales and distribution facility.

The new location, located 15 miles from the original facility, allows for the retention of approximately 90 employees and will be designed to implement best practices in the areas of safety, quality and environmental responsibility.

“Our No. 1 goal was to be in a location near our existing facility to retain our talented workforce,” McKernan said.

He said there is room for growth down the line in terms of employment numbers.

The business is now running a one-shift operation with a small second shift. “We are poised to grow our business and employment at the new facility,” McKernan said.

C&S Companies in Syracuse is the general contractor for the EJ project.

“They did a fabulous job on that facility,” said Treadwell, noting C&S managed to squeeze the facility into a fairly long and narrow site in the industrial park.

“They did a beautiful job in terms of laying it out,” said Treadwell, noting OOC realized that site was going to be difficult to sell because of those limited dimensions.

EJ is on a payment-in-lieu-of-taxes — or PILOT — agreement with the county. It’s estimated payroll is more than $4 million.

It is the largest freestanding manufacturing facility to be constructed from the ground up in the county in many years, Treadwell noted.

The OOC leader noted the last project of that magnitude was the 2012 expansion at the Fulton Companies in Pulaski, which involved 112,000 square feet of added space.

EJ is a 135-year-old, family-owned business with headquarters in East Jordan, Mich. 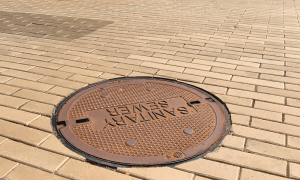 EJ, the Oswego County Industrial Development Authority, Empire State Development and National Grid have been working with state and local officials to see the project come to fruition.

The new facility is projected to generate approximately $164,000 in average annual payments-in-lieu-of-tax to the county, Phoenix Central School District, county and town of Schroeppel.

It has created an estimated 65 construction jobs.

Based on the multiplier effect, it will create approximately 81 jobs and $3.8 million in annual earnings due to the spinoff economic impact of the manufacturing plant, according to Oswego County sources.

“Demand for our products currently is strong across most regions of the world,” McKernan said. “We continue to hope for an ‘infrastructure’ bill that will be forthcoming from the U.S. Congress in 2019.”

While the new Congress and the White House kicked off 2019 in the midst of a partial government shutdown, President Donald Trump and the leadership of the U.S. House and Senate have reportedly acknowledged that authorizing funding for infrastructure projects will be atop their legislative priorities.

After it abandoned its infrastructure agenda shortly after proposing a 10-year, $1.5 trillion plan in February 2018, the White House reportedly appears ready to try pushing a plan again this year with a divided legislative branch.

New York state is constructing a $100 billion infrastructure plan regarded as the largest in the nation.

Meanwhile, Oswego County recently commissioned an infrastructure analysis in support of its economic advancement plan that details various needs in the area. 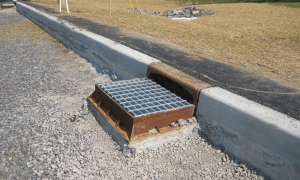 Demand for EJ products is driven by several factors, led by demand for additional and upgraded infrastructure, McKernan said.

Development of lots for construction of single-family homes is another factor, he said, as is public works spending on new or improved water systems, maintenance of existing systems, new or upgraded sanitary and storm sewer systems, utility systems such as electrical power and gas systems, and telecommunications and cable systems.

“Basically, any system that is underground and needs to be accessible from above ground is an opportunity for us to source our solutions,” McKernan said.

The facility manager addressed how U.S. tariffs on imported goods such as steel and aluminum have impacted the bottom line at EJ.

“We work with many suppliers and manufacturers of domestic steel products. Nucor supplied the steel for our new building. We support ‘Buy American’  iron and steel laws,” he said.

However, EJ has been impacted by higher costs as domestic producers and raw materials have increased prices.

“Overall, we support actions that are taken to level the playing field in global trade negotiations,” he said.

EJ continues to be owned by descendants of William E. Malpass, and fourth- and fifth-generation members of the family continue to be active in managing the business.

Over the years, the Malpass family and EJ have provided support for the local communities in which they operate. The pride of social responsibility is passed on to employees at EJ by encouraging them to volunteer their time and talents to local organizations and events.