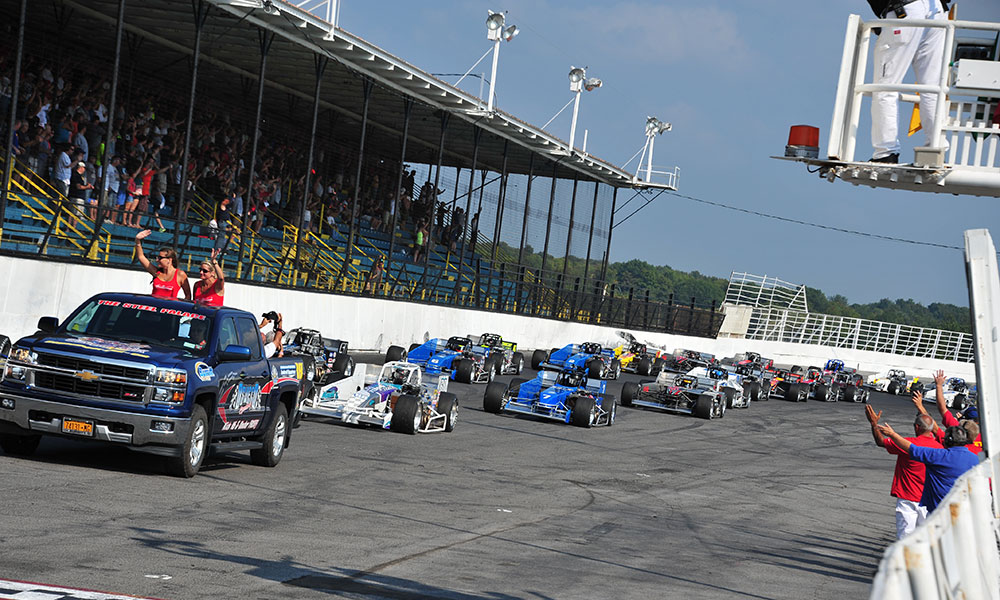 After a pandemic-forced hiatus in 2020, the speedway has officially reopened, with Super Dirt Week on the horizon 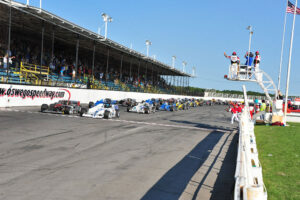 Built in 1951, the Oswego Speedway sits atop the hill on East Albany Street.

The Caruso family built and owned the track from 1951 until April 2004 when Pat Furlong and Steve Gioia Jr. acquired the 5/8-mile asphalt oval track. They sold it to Eric and John Torrese (Circle T Motorsports) in 2011. This summer marks the 10th year the track is under the Torrese brothers’ ownership.

It ran uninterrupted through 2019. The speedway’s 2020 season was canceled due to the COVID-19 pandemic. But it has roared back to life on Saturday nights in 2021.

Some Saturday nights, the speedway is loud; other nights it isn’t. “Sometimes, you can hear it in Fulton,” Eric Torrese said. “Just the way the sound travels.”

Either way, The Steel Palace is known far and wide.

Over the last 10 years, the Torreses have given the facility a facelift and rejuvenated waning attendance figures. Renovations at the facility were “quite intense.”

“There is constant work being done here. You can see we’re working on the parking lot right now,” Eric Torrese said in late June. “I guess the biggest change in the past 10 years is Super Dirt Week coming to Oswego Speedway. That’s huge. It was canceled due to COVID in 2020, but it is back for 2021.”

The Torreses have made sure the speedway is safe for everyone, fans as well as drivers. All the back grandstands got redone. More safety lighting and cameras were also added.

The speedway was covered by approximately 6,900 cubic feet of clay for DIRTcar modified drivers to compete in the NAPA 300, the richest dirt modified race in the world.

The state of New York spent $1.1 million in renovations to the speedway that year. It received a new scoreboard and bleachers; the campgrounds got plumbing and electricity upgrades.

The JumboTron is new, about five or six years ago.

“Again, these are big ticket items we’ve done. There are always projects that we look forward to. If we can bring them to fruition is yet to be seen,” he added. “It’s a tough business, as is everything else these days. COVID didn’t help with anything.”

There have been a lot of community events at the track like the food giveaways during the pandemic and the big Halloween event last October, trick-or-treat in a trunk.

“That went over very well,” Torrese said of the Halloween event. “I think there were around 4,000 people for that. And, we’re going to do that again this year.”

For the Halloween event, traffic was backed up out to [Route] 104 past Dunkin’ Donuts and down the Hall Road, also.

Oswego Speedway: What started as a horse racing track in the early 1950s has become one of the major attractions in CNY’s tourism industry

The food giveaways were very successful also. They had long lines as well.

Oswego Speedway is a big part of the community.

“It has actually brought a lot of attention to the city as well. We’ve had food drives here, other charity events, too. It’s all about the community. This track is a big part of that community,” he said. “We have different events throughout the year; breast cancer awareness, for example. We’ve lost a couple of people associated with the track. Instead of the Steel Palace, we’ve been the Teal Palace for Mary Gosek’s charity. There are numerous charity events throughout the year.”

“I think the biggest improvements, like I said, are Super Dirt Week, all the community events that came out of COVID, the improved parking and camping. It’s an older facility and constantly every day, it seems, there is always something to do. We’re always looking to improve, to offer the best possible and safest racing experience for the drivers and fans alike,” he said.

“I think the city will attest to it, [Super Dirt Week] is one of their biggest revenue generators.”

The speedway has signed an online streaming agreement in 2021 for FloRacing to broadcast weekly Oswego Speedway races.

“That’s huge. So we’re getting a lot more viewers outside of, not just the state, but outside of the United States,” he said. “The Canadian border isn’t open yet [as of mid-July]. That has hurt the track’s attendance figures. Sure, absolutely. They’ve said that maybe at the end of June it will reopen. So, let’s hope that they do that, for everybody’s sake. We have Canadian competitors that can’t come over and compete. We have Canadian fans that can’t come over. They’re all waiting for a chance to be able to get out again. Just like us Americans, when we got a chance to get out and get back to normal.”

“There are a couple things out there. But I really can’t talk about that right now. It’ll bring national attention to the speedway,” he added. “We’ll never stop moving. You have to keep improving.”

“This place has a lot of history, it does, it really does. There’s even a personal history. I never raced here. My brother, John, did,” Eric said. “My dad [John Torrese Sr.] raced during the first years that the speedway was built.”

John Jr. raced at Oswego as well as on the International Supermodified Association circuit. Eric Torrese also competed for a while aboard a winged super within the ISMA ranks.

“My dad was the last living driver that won on dirt then asphalt. Now, Super Dirt Week is going to start this all over again. This was a dirt track the first half season. Guys like Jack Murphy and my father that won at that time and then won again when they paved it. Now with Super Dirt Week, guys like Max McLaughlin and Tyler Thompson race dirt and asphalt. Both those young guys have a chance to win on any surface,” Torrese said.

With his asphalt Supermodified win at Oswego Speedway on May 15, the 21-year-old McLaughlin could be the first driver in history to win a Supermodified race at the Steel Palace and the Billy Whittaker Cars 200 during the 49th NAPA Auto Parts Super DIRT Week (Oct. 6-10) in the same year.

“It’s less expensive, for the most part, to race a dirt car. Supermodifieds are a very unique race car. Where there are probably 10,000 dirt modifieds in the country, there are only 100 Supermodifieds, in the whole world,” Torrese said. “So that also is part of the challenge. We’re the only weekly modified track in the country. Some travel, but they don’t run on a weekly basis.”

“We’re trying to keep the history alive, create new memories here,” he added. “We have a lot of good people here, friends and family, who really do the day-to-day stuff and keep everything going. We had a good shout-out this year from Dale Jr. in his podcast. With Dale Jr. mentioning your speedway in any conversation it’s a great thing, a big plus.”

“We had another first-time winner the other week with Mike Bruce. There are 10 guys that could win on any given night. Ten or 12 guys, that’s how competitive things are now,” he said. “We changed the rear wing three years ago and it made the older cars closer to the newer cars. It kind of evened the playing field. Anybody who comes out (to race), it’s a big sacrifice for everybody’s family to have a supermodified. Anyone who gets a win really deserves it.”

The divisions are growing. Younger crowds are turning out.

A lot of the Kartway drivers have moved on to the big track, Torrese pointed out.

The Oswego Kartway is located behind Oswego Speedway. Races are held on Friday nights from May through September. It offers “several competitive karting divisions and fast, affordable family fun for people of all ages.”

“Tyler Thompson raced out there and he is our youngest Classic winner ever,” Torrese said. “They start in karts at 6 or 7 years old. So, by the time they are 17, they have 10 years of racing experience under their belts.”

“With the younger drivers, guys like McLaughlin and Thompson, they definitely bring young kids to the race track, their friends and family. Kids 16 and younger are free, makes it affordable for a family to come to the races,” he added.

The attendance had been waning when they purchased the track.

It has come up.

“I think it has kind of leveled off currently. It depends on the weather, obviously, like any event. But, you know, for Classic and Super Dirt Week, we still fill up the front and back grandstands,” Torrese said. “We have an over 12,000 capacity. That’s a lot of people to put in here.”

There are probably a dozen or so campers that are already in the speedway’s lot. They bought season passes and spend summers at the track.

More people are coming back to the track. “It’s all about personal choices, how they feel about getting out, especially in a place with large crowds,” Torrese said.

“It’s scary times, but hopefully the worst is behind us now and we can all get on with our lives and get back into enjoying life, as we should,” he added.

They have been “very fortunate” weather-wise. They have only lost about half a dozen races due to bad weather in 10 years.

“We made a commitment to get the races in as best we can the last 10 years. We’re going to get hurt attendance–wise, but that day was just too bad,” Torrese said, referring to a rainout earlier this season. “I don’t think there are too many businesses and certainly not any tracks that I’m aware of, that has that kind of percentage of getting shows in. The worst thing is when you cancel, and the weather turns and it’s a beautiful night. There have been nights where we’ve had to dry the track a couple of times and get in a little later than we wanted to. But, we got the shows in.”

And, all fans are invited.

“There is no underselling the excitement of seeing Super Dirt Week with fans again,” Dirtcar CEO Brian Carter said on superdirtweek.com. “This is a special event not only for us and the drivers but for everyone in New York and the motorsports community. Like you, we’re eager to get this historic party going again.”

The event features the best drivers from around the world in the Big Block, Small Block, Sportsman and Pro Stock divisions.

New this year, fans who can’t make it to Oswego will be able to watch all six days of action at Super Dirt Week live on DirtVision with either the annual Platinum FAST PASS or the monthly FAST PASS subscription.

Banking: Semi-banked (about 13 degrees). The track is not truly an oval, but is more akin to a “four-corner” track.

Healthcare Reform Must Run the Gauntlet