Imagine it’s your birthday party, Jan. 30.
It’s 25 degrees, snowing and blowing.
But you and your party guests don’t care: you’re splashing around in 84 degrees — in Oswego.
Huh? Oswego, the snow capital of Central New York?
That’s right; the Splash Indoor Waterpark and Resort on East First Street will offer year-round climate controlled fun.
The waterpark is about to make a big splash in Central New York.
Currently still under construction, this $6.7 million facility is located on the campus of Broadwell Hospitality Group, LLC.
“What it’s doing is actually transforming our entire city portfolio,” said Shane Broadwell of the Broadwell Hospitality Group.
The state-of-the-art indoor waterpark will cater to locals and tourists alike. It includes two signature high-energy looping slides, a splash pad with all sorts of water action, topped by a 500-gallon tilt bucket and a signature retail center.

This project, like other construction projects, faced some challenges due to COVID-19.

“In 2020, as we were in the ground …we hit COVID. We’ve had some setbacks. We lost 12 months in construction time; there was a drastic increase in material and labor costs – anybody building, doing anything is suffering today,” Broadwell said.

“Our delay in opening was disappointing and frustrating, but we knew we were not in the boat alone. Every business and person has felt the impact of COVID-19, so we rolled with the punches and did our best to keep things moving,” he added with a shake of the head.

“And then COVID hit and the project was considered non-essential by the health department and we were delayed until March of ’21,” he added.

That caused drastic increases in labor costs and material costs; all the architectural and engineering costs were also increased.

“We have, at this point, $1.5 million of our own money invested. With the increase in interest on loans and financing and the timeframe has added an additional $1.7 million to the cost of the project,” he explained. “The total cost of the project is $6.7 million.”

The idea is what you’d call a family entertainment center, an FEC, Broadwell explained.

“It’s something that my father (George “Buddy” Broadwell) actually thought up, the water park concept. It’s been hard keeping up with him as he has overseen every aspect of its construction 12 hours a day and seven days a week,” he added. “We couldn’t be more excited about introducing our latest project to the market. My father had a vision and it’s culminated into a product that will seal his legacy as one of Oswego’s most committed developers.”

Historically, the whole community goes into a complete slowdown from mid-November all the way until March, Broadwell noted. The most active season is all May to October.

“For us that is six months and then we have six months to survive. So when you go from November all the way until March there are not many events in the community,” he added. “What we are really doing all the way from November until April in all the hotels is sharing the same business travelers. That’s Sunday through Thursday. It’s a small pool of travelers and it’s even worse now after COVID.”

A boost during the off-season

When discussing the positives of the project, Broadwell spoke to the seasonality of the market and how the new park can assist in driving off-season demand.

Everyone in the community understands the challenges faced December through March — “as the snow flies, so do the tourists,” he said.

He described the park as a “welcomed oasis” in the heart of winter.

“The waterpark will be 12 months a year — 84 degrees every day, 44% humidity. In the worst of winter, you’ll be able to slap on your swimming trunks and be able to enjoy yourself. Birthday parties are going to be a significant impact on the waterpark and a huge, huge gain for the community. We could have from 800 to 1,200 private birthday parties a year inside that space. We’re not saying it will cure all of our business level pains in the off-season but, hey, it’s certainly not going to hurt,” Broadwell added. “We even converted three of our guestrooms in our attached Clarion Hotel in anticipation of the heavy demand. We could even convert a couple more if the demand is there.”

“Where are you going to have that special birthday party like this? When we look at the map, we know we will have the premier location for birthday parties for kids,” he continued. “And what is important is — they can stay. It’s not like you have to come in with all your gear in the middle of winter, get inside, get the biggest locker rental possible, change, go do your thing for a few hours, then pack it all up and get back out to the car and have to drive.”

Family packages will be offered for those who want to overnight.

The Broadwells also anticipate a lot of different corporate events. It’s going to open up the door for a lot of companies in this area. In the worst of winter, “you can come in here and have your luau; have your own corporate party, your own private splash. This will create a lot of opportunities for those corporations to say ‘hey let’s do something different,’” Broadwell said. “We already spend a significant amount of marketing dollars in enticing various meeting and event segments to Oswego; and in particular our two hotel products and meeting space housed in the Best Western Plus. This will add one more reason to select Oswego to be host to future events and drive the entirety of Oswego’s economic prosperity.”

The Splash Indoor Waterpark and Resort will feature three levels. The entire facility is going to be a bit less than 20,000 square foot total. The main floor, the waterpark floor, is about 12,500 square feet. There will be a water bucket that holds 500 gallons to douse kids, a pool with other activities, a 30-person hot tub and a large pool, complete with multiple basketball hoops.

The second tier will be a fully-enclosed air-controlled video arcade. So 1,500 square feet are the arcade, which will feature all the new, most exciting top games that are out there today; as well as a full-service bar, concessions and four private party locations, Broadwell noted.

On the third tier, “Our Steamers restaurant will flow right on through; it is right on the same level,” he explained.

A full-service bar will serve trendy tropical libations and a full concession menu. The food offerings in the park itself will be family-friendly (just not your traditional sit-down meal).

“When you look at family entertainment center food, it is smaller individual pizzas, baskets of burgers and fries, chicken tenders; a lot of things like that,” Broadwell said.

There will be at least, at minimum, six life guards on duty at all times. Some times, there will be more than that during the peak season.

“We’ll be doing our own lifeguard training,” he added. “This is shallow water; it’s not the same as your deep-water lifeguarding. Our deepest water is 4 foot 6 [inches].” 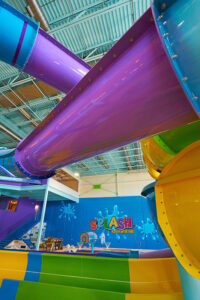 The project has not only put local private contractors to work but will also create up to 80 new jobs, Broadwell said.

“We’re working with a team that’s called ARM, American Resort Management, because they are waterpark specialists,” Broadwell said. “They have been instrumental throughout the project from design, construction, staffing … everything that goes into making it a successful campus.”

“It’s a game-changer. It makes the footprint of Oswego, as a whole, bigger and more exciting. It represents collaboration between public and private sectors,” said Geoffrey Reeds, ARM’s corporate vice president of sales. “It puts new jobs in the market and creates additional tax revenue for the city, county and state. We predict a substantial increase in tourism as the facility is introduced to the market.

“It’s just not the Broadwell family that benefits from this addition to their campus. People who may not have been coming to Oswego were it not for the waterpark will visit. When that family drives in, they’re going to fill up their car with gas, stop at local stores to get something they forgot, explore local restaurants, the Children’s Museum all the various attractions. When you bring in an attraction like this, it benefits everybody. It’s a perfect example of a win-win scenario, where not just the developer, but the community at large all reap the benefits of such a premium attraction.”

“ARM is very excited to have been engaged by the Broadwell family for this new and very exciting project,” Reeds continued. “We think that it will help in broadening the level of excitement of the community at large and create jobs and a substantial increase into tourism into the marketplace.”

Reeds added that in other similar projects his company manages, the trickle-down positive impact is also felt by area restaurants, retail businesses and local attractions.

The facility will increase the level of tourism in Oswego, help create new jobs and maintain existing jobs at both hotels, both restaurants from that October–March time frame where things typically slow right down.

Broadwell said, “What this will do is completely flip things on our head and help us to maintain all of the staff that we have in our hotels.”

When you look at a waterpark of this scale, when is its busiest time frame? It’s in the middle of winter — Christmas breaks all the way through spring break — when everybody in the region doesn’t want to travel far, he said.

This is an indoor, climate-controlled facility that can be enjoyed no matter the weather.

“An important part of this equation that is important is how many jobs that we’ll maintain all winter long. Historically, we’d hit October and we had housekeepers [and other personnel] who’d take a layoff because we get so slow. We’d call them back when we need them. But now, this is going to flip that right on its head,” Broadwell said. “Now those people will be full time all the way through winter, which is when the waterpark will be at peak.”

“The HVAC system will be such as to keep things fresh. It’s a top priority. It’s not just the smells and irritations that the chemicals can have on people — it also has to do with all your equipment. The system will turn over that air and keep fresher air coming in. So it doesn’t eat through everything else you’ve got going on. Every piece of steel in that building has multiple coats of protective paint on it just for that reason,” Broadwell said.

So, how much water will this facility actually use?

“You know, I think that’s actually been calculated. I don’t know right off the top of my head,” Broadwell smiled. “It’s a lot.”