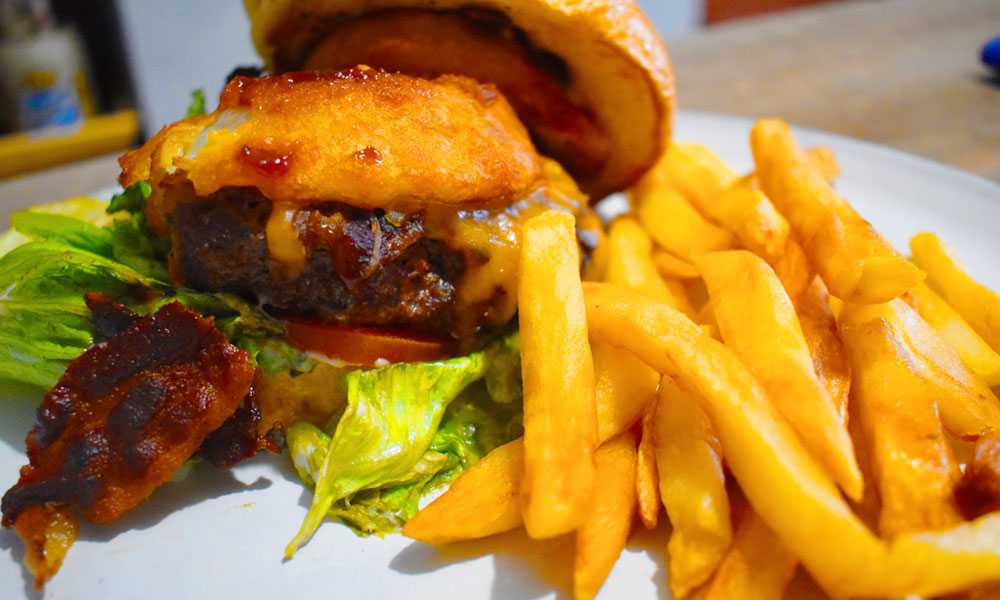 Oh, Sherry, your food holds up.

It’s interesting to visit a location for a couple reviews. While sitting at the counter of Sherry’s Downtown Diner, 7 W. Bridge St., Oswego, some unwarranted comparisons to the former Dino’s House of Burgers popped into my brain.

I never visited Hanabi Sushi Restaurant, which was located in the same space a while back, however, so there was no basis for comparison. But there’s a lot to enjoy and admire when different business owners utilize a space. It means a space is a hot commodity — especially being adjacent to the Oswego Children’s Museum and around the corner from Old City Hall and Water Street Café — and valued.

The minimally decorated Sherry’s Downtown Diner is a bright space, and the large windows do help. The tables are spaced out and plexiglass dividers separate countertop seating, at appropriate distances. The bathroom, albeit visibly and aromatically spotless, still feels like a locker room.

The personalities of those who work there, including the eponymous Sherry, were beyond friendly and hospitable. The diner is one of those places where I felt greeted as if I’m a regular, not a first-timer. With a smile, I sat and enjoyed multiple cups of medium-bodied “bottomless coffee” for $1.75.

The menus — there are two-sided, laminated breakfast and lunch menus — are to the point and boast familiar staples. Although making decisions are tough at times, I ventured into both mealtimes. It almost felt like 2007, when I was in Greenwich, England, standing with one foot on each side of the Prime Meridian.

Move over eggs and bring on the stuffed French toast and pancakes! Out came the short stack of flapjacks ($3.75) and French toast ($4.75). A short stack, similarly to everywhere else, is numerically two of whatever a person orders. By luck, I received three slices of stuffed French toast. Per my server, the diner’s griddle master considered it “special” — boy, did I feel special.

Unlike the French toast I’ve consumed in recent reviews, Sherry’s version does not feature rinky-dink, wimpy bread. The medium-thick slices of whipped cream cheese-stuffed bread are great. The flavor of the cream cheese is present enough and doesn’t overpower the cinnamon dust freckling the bread. Whipped cream and fruit (strawberries or blueberries) can be added — and they were. Although the fruit came with that grimace inciting syrup, there wasn’t pooling.

The pancakes were golden brown discs and met expectations — crispy around the edge, fluffy in the center. They boasted that fresh-off-the-griddle aroma and flavor. After smearing a bit of the butter ball across the surface of the pancakes and drizzling on the maple syrup, each bite was a dose of happiness.

For the cold winter day, a cup of chili ($1.75) sounded perfect. Never have I seen a price that low for a cup of chili — slightly concerning at first. The flavorful bean-heavy chili was hearty with chunks of meat and a medium heat. Instead of the red-brown color of standard chili, it had an orange-red hue. Thus, this version proves chili is difficult to mess up and I love enjoying other people’s take on this popular dish. I’d have doubled up on the servings had I known.

I was having a difficult time deciding between the Reuben and the honey BBQ melt but another patron chimed in, saying he hasn’t had the latter but the Reuben is good.

He was right — the Reuben is good. For $7.95, a customer gets a thick sandwich packed with corned beef, sauerkraut and dressing between those slices of bread. Plus, a side is included; I went with some classic mashed potatoes, complete with red skin flecks. The sammy wasn’t drenched in dressing, had an even distribution of mild sauerkraut, and the tender beef was flavorful and not dry.

I finally ended the meal with the BBQ burger ($7.75). Fear sunk in at first — my server did not ask me how I wanted the burger cooked. The expectation: a thin patty that’d be charred to something slightly softer than a hockey puck. Thankfully, this presumption was incorrect. The thick patty was cooked medium, came with lettuce, two onion rings, and a slathering of barbecue sauce.

The stacked-high burger, which needed two hands to eat and extra napkins, came with standard fries that can be found, well, anywhere.

I’ve said it once and said it before — nothing beats a diner. For all this food, the bill (pre-tip) came to $28.03. Yes, there were some leftovers that my wife enjoyed. Well, except for the second half of the Reuben. Our pup pulled it off the counter. Two paws up from that guy.

‘What should businesses expect in 2022?’