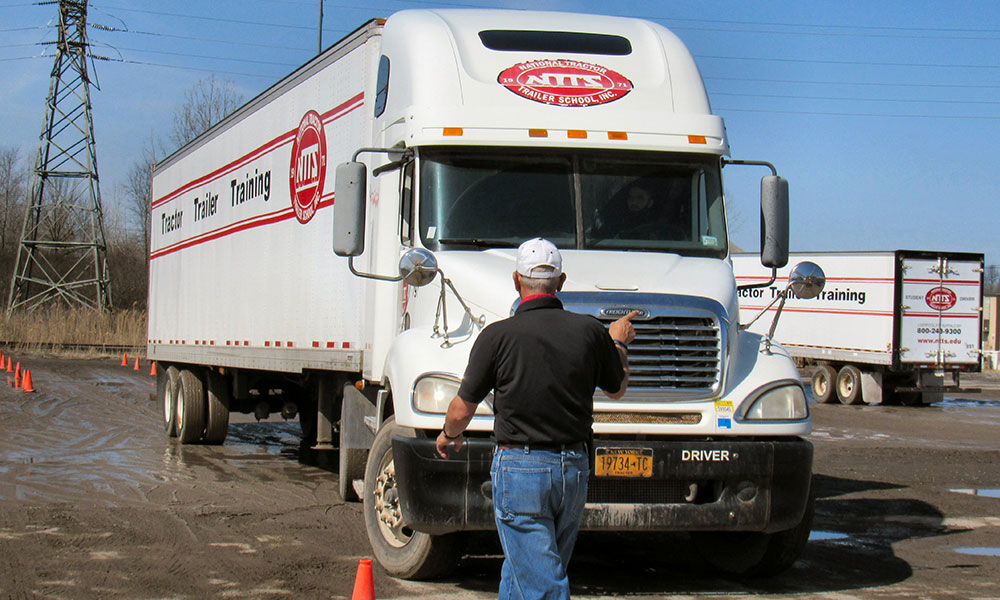 An instructor working with a student driver at National Tractor Trailer School (NTTS) in Liverpool. Since 1971, the school has trained and placed thousands of people into professional driving careers.

The supply (capacity) side of the freight market was very tight in 2020 and it appears to be getting tighter into 2021.

It isn’t because equipment is scarce.

According to the American Trucking Association, the industry is short between 50,000 to 80,000 drivers. That number will grow as older drivers retire.

Many drivers are leaving the industry in search of jobs that offer better pay, benefits and working conditions. They’re simply not happy or satisfied with the lifestyle driving a truck for a living provides, according to smarttrucking.com

Over the last two decades, the amount of tonnage shipped across the country has steadily gone up. Yet, the number of truck drivers hasn’t fluctuated much, remaining near three million. That means roughly the same number of drivers have been hauling an increasing amount of goods.

Between the retiring workforce and increased demand, the driver shortage is growing too fast for the industry to keep up.

Baby boomers nearing retirement age make up the bulk of working drivers. At the same time, the next generation, the one that should be ready to take over jobs as they become available, is about 12% smaller, according to fullbay.com

More than half of truck drivers are 45 and older. There are currently about 1,871,700 jobs. It’s predicted there will be nearly two million by 2026. With 55%of the driver base looking to retire within the next 15 years, that means the industry needs to fill more than a million jobs over the next few years.

“Absolutely, there is a shortage. We’ve seen it. There are more job opportunities than there are people to fill them,” said George Joyce, CEO of LaserTransit in Lacona. “We’re at a loss trying to figure out how to attract and retain new drivers.”

Things such as safety and salary are also somewhat to blame for the shortage.

Historically, truck drivers spend a lot of time on the road, away from home. That way of life contributed to a high divorce rate among drivers.

“The baby boomer generation is aging. Fewer new drivers are entering than there are older drivers leaving,” Joyce said.

To get a CDL-A license, you have to be at least 21 years old. Most trade schools, such as CiTi, can train students to become plumbers, electricians or other trades and be ready for work at a younger age.

“The attraction of being a truck driver isn’t what it used to be,” Joyce said. “It’s a serious job. We need to hire professionals.”

The industry as a whole is going more with automatic transmissions, as many younger drivers don’t know how to drive standard.

“I believe all companies have a huge focus on driver recruiting. But, what dovetails into that is also retention. If you recruit great drivers, do your utmost to keep them! That is where companies fall short,” said Robin Hansen, a driver recruiting specialist with First Student Bus in Syracuse. She recruits for Syracuse, Binghamton, Auburn, Skaneateles, Watertown, Indian River, Gouverneur and Lisbon/Ogdensburg.

First Student Bus employs hundreds of school bus drivers all over, including the North Country and Onondaga County.

“Heavy and tractor-trailer truck drivers are currently in demand in the Central New York region. The occupation has favorable employment prospects based on our long-term occupational projections for Central New York and New York state,” said Karen Knapik-Scalzo, associate economist with the New York State Department of Labor, Division of Research and Statistics in Syracuse.

The statewide long-term occupational projections growth rate (6.8 %) in this job title is outpacing the national growth rate of 5.8 % in this occupation, according to Knapik-Scalzo.

Many companies don’t want to take a driver without any experience.

“They are more of a liability. Some companies, two years ago, actually lowered the experience rate from two years to one year or from one year to six months,” Hansen said. “It is very difficult to hire quality drivers, those without accidents, tickets, bad habits.”

“We try to hire people out of the military. We also get people who are maybe changing professions; these are mostly part-time employees,” Joyce said.

It’s not a job that traditionally attracts women. Less than 7% currently are female. But, Joyce said he’d hire a qualified woman driver.

Market is Hungry for Truck Drivers

Since 1971, National Tractor Trailer School (NTTS) in Liverpool has trained and placed thousands of people into professional driving careers.

Receiving its commercial drivers course certification in July of 1998 from the Professional Truck Driver Institute, NTTS became part of a unique group of professional driver training schools in the United States and Canada. Since its inception, NTTS has remained under the same name and ownership and remains committed to offering courses certified by PIDI.

Jamie Sather, placement director at NTTS, said, “The market is hungry for truck drivers and there will never be enough CDL drivers.”

Through its job placement assistance, qualified NTTS students and graduates can choose from employment opportunities with local, regional, dedicated and national trucking companies.

“There also will be growing demand for additional tractor-trailer truck drivers as new local warehousing and distribution facilities come online this year and the economy continues to improve,” Knapik-Scalzo said.

The type of work you are hiring for will help you focus your advertising/marketing campaign, Hansen said.

“Absolutely, there is a shortage. We’ve seen it. There are more job opportunities than there are people to fill them. We’re at a loss trying to figure out how to attract and retain new drivers.”

Work types can vary from no touch freight, to heavy touch and lumping (actually unloading product with hand carts and pallet jacks) or just drop and hooking.

“No touch freight is the best. Minimal effort, good pay,” Hansen said, adding, “In the trucking world, no job is 9-5. You can be home daily or over the road. Home daily can be anytime depending on your start time. You can expect to run a 10-, 12- or 14-hour day.”

Data from Labor Insight (Burning Glass Technologies) HWOL on hard-to-fill jobs indicates that tractor-trailer truck driver job postings take about 1 to 1½ months to fill in the Syracuse MSA, which is in line with the national average.

“As far as NTTS enrollments, we have definitely seen an increase,” Sather said. “People are interested in a career that is stable, pays well and is always in demand, given all the recent layoffs that have been occurring.”

Trucking is listed as one of the most dangerous jobs in the country.

The drivers also encounter elevated stress levels as they face the challenges of the four-wheelers on the road (cars and pickups) who think you can cut off a big rig without consequences. “Some of these trucks are hauling loads in excess of 65,000 pounds,” Hansen cautioned. “They do not stop on a dime.”

“The industry is doing a lot of techniques to attract new employees. Things like more safety features, air-conditioning, comfy sleeping compartment, an attractive schedule. It’s a challenge. Home time is a big part of it,” Joyce said. “A lot of drivers today are home every night and sleep in their own bed. They’re not always out on the road for weeks at a time. Home time is a big issue.”

Not all driving is OTR (over the road). If you are looking for a “home daily” job, they are out there, according to Hansen.

Many companies are utilizing enhanced electronics (in the cab creates an additional distraction; one that you ultimately get used to) that not only govern the speed of the rig but lane sensors and more. These devices omit a sound and have colored lights to denote various hazards.

Some companies are utilizing cameras that not only are outward facing, but that face the driver. If you are one of those companies with cameras facing the driver, there are drivers that flat out will not work for you, regardless of whether you give them a tremendous salary or not, Hansen pointed out.

Companies have been known to up their sign-on bonuses during challenging times.

One company offered an $8,000 sign-on bonus (paid out over the course of a year). Some companies will drag the payout over two years, Hansen said.

“Drivers know that their CDL license is their golden ticket and they can go to work anywhere in the United States. If they don’t like the weather here, they can move to Arizona, Georgia and so on,” Hansen said. “That license is like gold!”

It’s not a one-size-fits-all industry.

The struggle is the same for school bus drivers. This is a part-time job driving children. You need a special person who is willing to tolerate children as their “cargo” on a daily basis. Their license is a CDLB with a P&S endorsement.

“The shortage goes right down to pizza shop delivery drivers. I spoke to one of those folks this week and they are struggling to find drivers, too! Imagine that,” Hansen said.