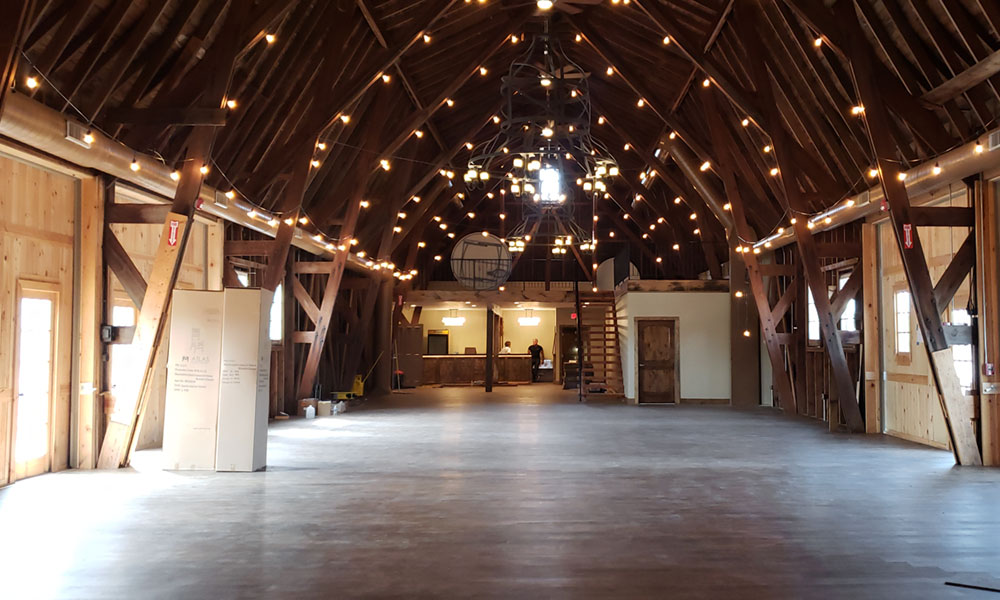 Located on the outskirts of the city of Oswego, Curtis Manor is a renovated former dairy farm, with its centerpiece being the historic barn.

Developer Anthony Pauldine, owner of Canal Commons in downtown Oswego, has taken on another business venture.

This time, he has opened a barn-wedding venue.

Located on Mark Fitzgibbons Drive on the outskirts of the city of Oswego, Curtis Manor is a renovated former dairy farm, with its centerpiece being the historic barn.

Over the course of two years, Pauldine and his company, Anthony M. Pauldine General Contractor, have worked to shore up the barn, which was on the verge of collapse when he bought it in August 2017.

“The day after we put the purchase offer in, we were here shoring up the building because it was about ready to drop,” Pauldine said. “This place was a wreck when we bought it. It was literally falling down.”

Renovations were completed by early September in preparation for the first of five weddings being held at the manor this year.

With an investment of about $1.5 million, including the purchase price, the building and grounds have gone through a massive restoration. The main barn and silos were repainted and re-shingled with their main structural supports all being replaced as well. A number of smaller service buildings on the grounds were demolished, making way for the freshly planted apple orchard and a pond.

A side building was also renovated into a “ready room” for brides and grooms.

The team paid special attention to the history of the buildings, adding historically accurate roof decorations and paying extra attention to the silos attached to the barn. The silos were built in 1920, and originally only intended to last a few years. After finding a donor silo in the area from which to get the proper materials, Pauldine and his crew restored them.

The total capacity for the venue is approximately 650 guests, which Pauldine says is the highest capacity of any other event hall in the county. He says that, along with the location and capacity, Curtis Manor is also unique in having a fully operational heating and cooling system.

“What makes it different is the capacity. There’s no one in the county that holds nearly that many people. The other thing is it’s the only barn venue in New York state that has heating, ventilation and air conditioning,” Pauldine said. “The nice thing is they can acclimatize in summer, in the heat of August when its 90 degrees and sweltering, or in the cold of winter when it can get to 10 below.”

The venue will employ about four part-time staff at first, according to Pauldine, namely grounds keepers and a wedding coordinator to take care of the facilities and plan events. He says there are no plans to open a full commercial kitchen, like many other venues in the area have done.

Pauldine said the opportunity presented itself when he toured the space in 2017. Even in its dilapidated state, he was seizing the opportunity when he put the purchase offer in, even though he had never expected or planned to run a wedding barn as part of his career.

As for a return on investment, Pauldine says he has not put much thought into breaking even.

“We know it’ll work. I’ve not been too concerned about the payback. We do know it’s extremely feasible, financially,” Pauldine said.

Even with the venue in operation, Pauldine said his plans for the location are not finished yet. Plans call for a hotel on-site in the next few years, he said, and he will be heavily involved with the business as it takes off, which he is confident about.

“Everything was an obstacle, but we were able to overcome them,” Pauldine said. “It’s just been a huge labor of love.”