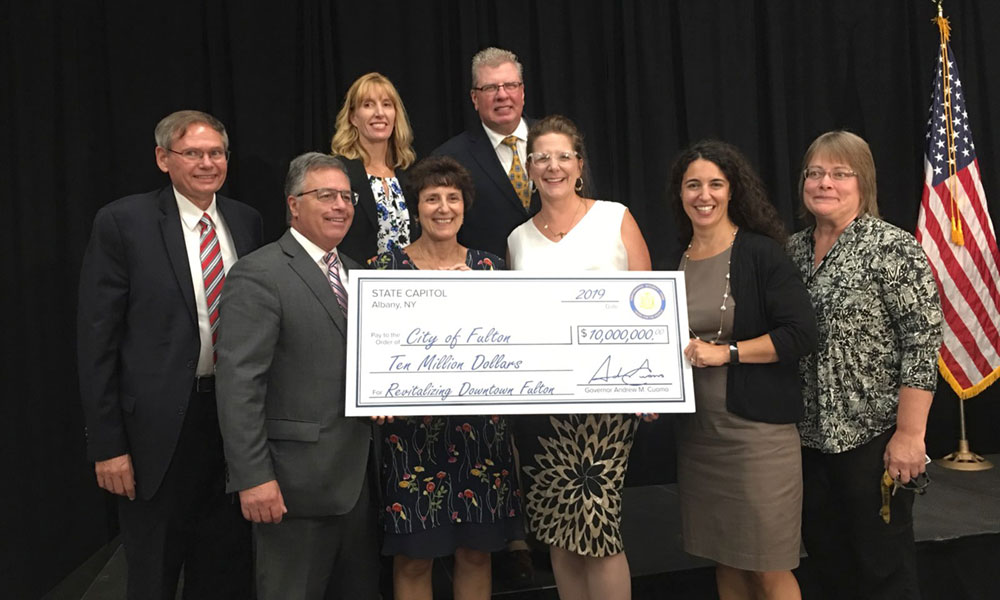 Q.: The city of Fulton is receiving $10 million as part of the fourth round of the state’s Downtown Revitalization Initiative. How important is this opportunity to help transform the city and its neighborhoods?

A.: This was a complete team effort with many people involved. We had seven people on the DRI committee, but I can’t even tell you how many different people brought in their expertise to really make this a wonderful effort. Even prior to the announcement, we were seeing new development coming into Fulton. There were announcements that Port City Bakery [in Oswego] was looking to buy a building here, and a couple of other businesses were relocating to Fulton. We had a little buzz going on, and when this announcement came, it just truly overtook the city. Social media just went crazy.

We were optimistically following the success of Oswego’s DRI as well. A lot of their DRI planning committee members helped us out. We had members of the Oswego County Department of Community Development, Tourism & Planning helping, and associate planner Karen Noyes really made our maps pop.

This is truly transformational for the city, especially our downtown. This can turn our downtown into that vibrant downtown that we have been looking for.

It also all coincides with many other initiatives that we have going on right now, such as the multi-use trail system. The first stage of that is getting ready to take off at the same time. We received a $900,000 grant from the New York State Regional Economic Development Council to help launch the first phase of that. How perfect is it that it all ties together at the same time?

Q.: What do you feel were the keys to being selected as a recipient of the DRI?

A.: Keys to being selected include shovel-ready projects, as well as a diverse list of projects.

There is everything from public Wi-Fi downtown to family fun centers, retail space and commercial opportunities, not to mention housing as well improvements along our waterfront.

One of the biggest attributes of the plan was public engagement. We not only held a public input session, but we had online surveying which generated an overwhelming amount of comments and ideas. I can’t tell you how amazing the input was.

We did a new activity this year by using SurveyMonkey®, an online survey program. People were amazed at how they could sit at home and come up with wonderful ideas and take the time to do it and not be put on the spot at a meeting. A lot of those ideas came from that, making this truly a public-engaged project.

In addition, the presentation of the plan was phenomenal and our video put it right over the top. It brought tears to some members of the committee when we saw it, because it really just told the story.

The public engagement this round was the best we’ve ever had for anything, and I’ve been involved in local waterfront revitalization programs and comprehensive plans. You could see it when more than 200 people showed up for the announcement. That is just unheard of. We were told by some of the state DRI staff that it was one of the best turnouts they ever had.

We have websites for the city www.fulton.ny.gov, the Fulton Community Development Agency www.fultoncda.com, as well as www.ilovefultonny.com and I Love Fulton NY on Facebook and Twitter as well as. We’ve just been getting tremendous support on all those venues.

Q.: When can Fulton residents expect to see some tangible results from the DRI funding? Are there any projections for when initiatives will be implemented?

A.: In terms of seeing tangible results, we don’t have a lot of information yet, but we are trying to schedule a meeting in the near future with appointed officials from the state.

Once that information gets out there, we want to be able to provide a public engagement type of media that will let people know what to expect.

I know a lot of people have questions in regards to what the money will be used for, when the money is available and when results will be realized, and these are all questions that we have as well.

Oswego won in the first round of the DRI, so I am sure things have been streamlined since then and activities are probably a little more straightforward.

It was a new program, and even state officials had to go through and find out what worked and what didn’t. I’m hoping that maybe it will be a little bit quicker. We anticipate that it will probably be a year before we see any activity.

Q.: What needs to be done during the planning stages of projects associated with the DRI?

A.: A local planning committee will be tasked with putting the plan together and getting input from all of us. We were told that not only will there be a consultant to serve as a go-to for the group, but there will also be state appointees, our DRI committee and stakeholders that will act as a steering committee.

There’s going to be many different facts of input into this, and it’s not only just for this $10 million DRI and possibly $60 million in leveraging. This is going forward on what the vision of our downtown is going to be. Even though it’s a short-term goal for this plan for the next two to three years, I think it’s going to carry us into our downtown development for years to come.

Q.: Has the city of Fulton learned from the city of Oswego’s experience of being a DRI awardee?

A.: I had a nice conversation with [city of Oswego] Mayor [William “Billy”] Barlow at the announcement and I told him right up front, “We could really take some pages out of your book. You’ve done such a wonderful job.”

This is a great opportunity for us to live and learn from what they did to be able to prosper.

We have some plans around our river, and they are not only plans for economic development, but also housing and recreational activities. We’re trying to include everything we can.

We feel that the river has been an untapped resource for a long time in the city of Fulton, and now this is going to give us an opportunity to really utilize it.

Q.: Will riverfront development be a focal point for DRI spending?

A.: While the river creates a great natural view, we weren’t sure how people were going to react to development along the river.

But the majority of the comments and ideas that came out of public engagement talked about getting projects done on our riverfront. One of the most unique projects that came out of the public engagement was having a Riverfest on the river, complete with a water fire show. We just thought that was wonderful, and why not have a restaurant there with waterfront seating to add to what we already have with Tavern on the Lock and a couple of other restaurants?

The riverfront is underutilized, and we really just want to make sure it is a focus of our future development.

Q.: In an effort to make Fulton more pedestrian friendly, a system of eight trails will connect city parks, points of history and other Fulton landmarks. How essential is this measure insofar as improving the quality of life in Fulton goes?

A.: This goes back to 2002 when we initially wrote our comprehensive plan. We updated it in 2003 and again in 2016. Most of our language in there speaks of making the city pedestrian-friendly.

There is a bridge walk right now that features people walking around the bridges, but there are trails identified in that comprehensive plan. The Fulton Footpaths group — led by Marie Mankiewicz and Brittney Jerred — took it to the next level by doing a feasibility study on how we can get these trails done. That actually helped secure the first $900,000 for phase one to get the two multi-use trails started along the Oswego Canal — the Pathfinder Canal Towpath Trail and the Canalview Bridge Walk.

We are going to complete that walk around the bridges with signage, lighting, benches, trash receptacles and information kiosks that will present some history of Fulton at certain locations.

Also, the north and central sections of the Pathfinder Trail will run from Indian Point Landing down to the West Broadway Bridge, which includes a strip between the canal marina and the library. There are a lot of great plans for that space, including new steps that were secured through funds from Assemblyman William Barclay’s (R-Pulaski) office located right behind the Veterans’ Park. That will actually tie the upper trail that is the bridge walk trail down to the Pathfinder Trail.