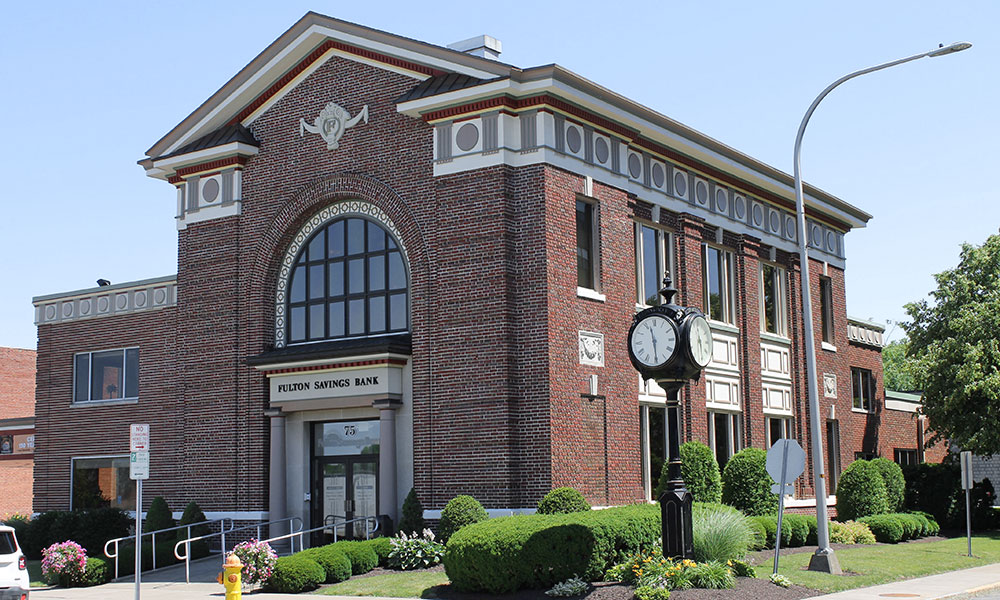 Fulton Savings Bank is the city of Fulton’s oldest, locally owned, longest-standing business at 150 years, according to The Friends of History in Fulton, Inc.

The bank is governed by a board of trustees comprised of local residents and businesspeople, who oversee the its overall operations.

Over the last 150 years, Fulton Savings has helped countless couples buy their first dream home, enabled scores of students to finance their college education, helped with home improvements and business start-ups and expansions. The bank has offices in Fulton, Baldwinsville, Phoenix, Central Square, Brewerton and Constantia with eleven automated teller machines (ATMs) throughout its service area. It has assets of more than $453 million and deposits of more than $317 million.

“The bank’s most important asset has always been people,” said Michael Pollock, president and CEO of Fulton Savings Bank. “The bank provides opportunities for all of us to work as a team, learn and succeed. In turn, employees share a common vision to treat all customers with respect and dignity. The formula and the atmosphere it creates leads to long-term loyal employees and customers.”

The bank has 71 employees; the majority of those employees have been with the bank for more than 20 years, said Annette Cotton, vice president, human resources and marketing.

“The reason I have worked at Fulton Savings Bank for so long is the opportunity for advancement from within the organization,” said Debra A Braden, vice president, branch administration. “I began as a part-time teller in 1992 and am now a vice president. If an employee puts in the time and the work, they are rewarded.”

By an act of the New York State Legislature, Fulton Savings Bank was incorporated in March 1871, “to receive deposits from tradesmen, clerks, merchants, laborers, minors, servants and others.”

That core mission remains and has been expanded over 150 years, according to bank officials.

In September 1871, Fulton Savings Bank opened its doors in a rented room at the northeast corner of South Second and Oneida Streets in Fulton. In 1911, the bank grew and expanded to move into its current headquarters on South First Street in downtown Fulton.

“So many banks, over the years, no longer exist,” Pollock said. “We’ve stayed as a local community bank and we’re still a mutual savings bank, which means we have no shareholders. Mutuality has allowed the bank to put our customers, the communities we serve and our employees first.

Fulton Savings Bank prides itself on its ability to change its services, adapting with the times, while still maintaining a high level of customer service.

“Through all the world wars, the Great Depression, 2008 financial crisis, and now COVID, we have been able to survive and thrive thanks to community support,” Pollock said.

Fulton Savings is there to help all the communities they serve.

“If customers have a need, we are right there, trying to help them out,” said Jerome Mirabito, the bank’s executive vice president and secretary. “We’ve demonstrated that both through financial support to individuals and community involvement by our employees. We really pride ourselves on being able to sit down and talk with people. You’re always welcome here at any of our offices, and we’ll spend time with you and listen to you.”

“So many banks, over the years, no longer exist. We’ve stayed as a local community bank and we’re still a mutual savings bank, which means we have no shareholders. Mutuality has allowed the bank to put our customers, the communities we serve and our employees first.

The bank’s employees have donated hundreds of hours of their own time to assist many civic and service organizations in the communities they serve.

In addition, according to Cotton, the bank contributes an average of $2,000 a week in the local communities, which adds up to more than $100,000 a year to many local nonprofit organizations. Among these organizations are the United Way, Oswego Harborfest, the Fulton Jazz Festival, CNY Arts Center, Futon Public Library, Friends of Fulton Parks, Friends of Great Bear, Central Square Lioness Club, Boy Scouts, local YMCAs, Oswego County Catholic Charities, youth activities and programs and many more.

The bank also has a longstanding scholarship program that has provided scholarships to area students attending Cayuga Community College and SUNY Oswego. The program was instituted in 1998, and scholarships are awarded through all 10 local high schools. The participating districts include APW, Baldwinsville, Central Square, Fulton, Hannibal, Mexico, Oswego, Phoenix, Pulaski and Sandy Creek. To date, the bank has awarded over a half million dollars to local students through these scholarships.

Although the pandemic sidelined early 2021 plans for celebrating its 150th anniversary, Fulton Savings has festivities planned for August. It will mark the date by hosting a customer appreciation week in their branches. It will be complete with giveaways, raffles and more activities at each branch.

“We wouldn’t have stayed strong for 150 years without the good faith and support of our loyal customers, and we want them to know just how important they will always be to us as their financial partner,” said Brian Caswell, chairman of the board.