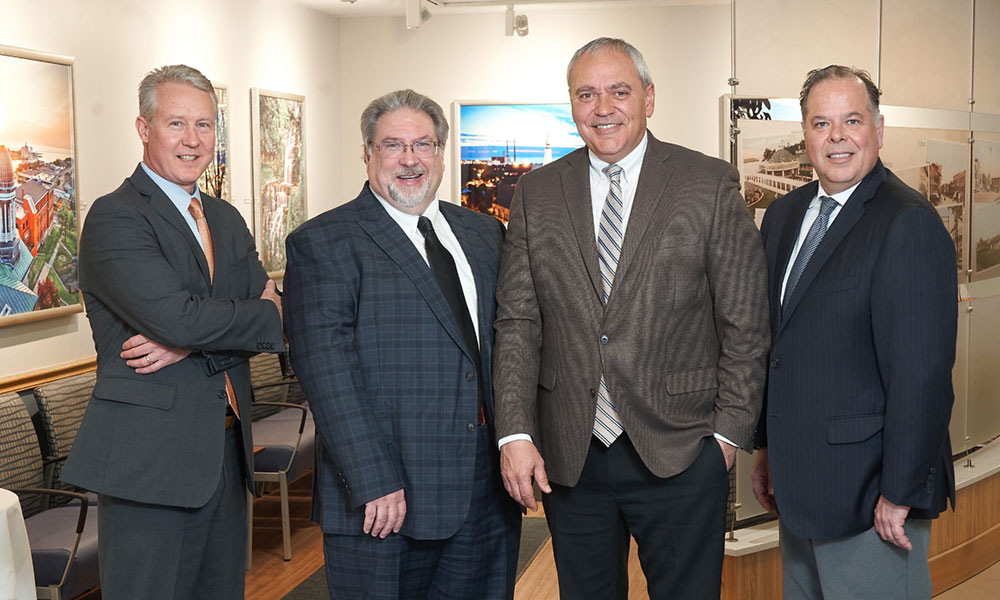 Oswego Health, a key economic driver in the region, is continually seeking ways in which to sustain its role as the region’s first choice for quality care through service, collaboration and clinical excellence.

“Our mission is to provide affordable, accessible and high-quality health care,” said Michael Harlovic, president and CEO of Oswego Health.

He noted there are several basic components to what that mission entails.

“We want to make sure we have a highly qualified medical staff that is able to provide service for all levels of care that we can here with the best doctors,” he said.

In addition, mid-level providers such as nurse practitioners and physician assistants will provide sufficient support for those doctors, he added.

Another key factor is to ensure Oswego Health has a highly trained and stable nursing staff, Harlovic said.

“We are focusing on programs to recruit and retain nurses and give them the best set of clinical skills we possibly can through in-house training,” he said.

Another vital component is the importance of a solid brick-and-mortar presence, Harlovic said.

Oswego Health is making significant renovations to its medical-surgical unit at Oswego Hospital.

The $8 million investment will completely renovate the third and fourth floors and modernize inpatient care.

“It will have a hotel feel versus a hospital feel,” he said.

It will continue its focus on primary care, which was significantly enhanced when Oswego Health acquired Oswego Family Physicians in 2018.

Oswego Health is working with other county-based agencies to enhance primary care, including ConnextCare, a federally qualified health center based in Pulaski.

“Our goal is to work together and keep all health care resources here for all the care we can give,” said Harlovic, adding Oswego Health has formed key strategic relationships with its partners in Syracuse.

Oswego Health’s service demographic ranges from Pulaski, Central Square and Fulton, the latter being “a big hub for us right now,” Harlovic said.

Plans in Fulton include a freestanding emergency department thanks to the opportunity for growth through recently acquired state Downtown Revitalization Initiative funding.

“We are really looking at our image as well,” said Harlovic, noting that Jamie Leszczynski, Oswego Health’s senior director of communications, is working on rebranding measures.

The thrust of the rebranding includes informing the public that area residents can get high-level quality care in Oswego County and do not need to travel to Syracuse-based health care facilities.

Jeff Coakley, executive vice president and chief operating officer at Oswego Health, said an important collaboration for Oswego Health has been with the Oswego County Integrated Delivery Network, an offshoot of the Rural Health Network of Oswego County.

“Our mission is to provide affordable, accessible and high-quality health care. We want to make sure we have a highly qualified medical staff that is able to provide service for all levels of care that we can here with the best doctors.”

Collaboration with local employers is critical for Oswego Health as well, he added.

Connections with Novelis, Exelon Generation, Huhtamaki, municipalities including Oswego County, and nine school districts “are key to us in terms of supporting their needs as employers.

“All of them are self-insured and have costs related to the health care of their own employees. One of the things we need to do is always be mindful of the cost of care and helping people as residents and patients receive that care here at the highest level of quality but also in an affordable way,” Coakley added.

Duane Tull, a general surgeon and chief medical officer at Oswego Health, praised the efforts of city of Oswego Mayor William Barlow, emergency services provided by the cities of Oswego and Fulton, and the county of Oswego in addressing the ongoing coronavirus pandemic.

“It shows how we can all get together and work together,” Tull said.

Among the foremost challenges for Oswego Health is declining reimbursements from government insurance programs such as Medicaid.

Harlovic noted there has been a 1% decrease across the board for this form of medical assistance, and that has had an impact on financials.

“We have to continue to give the same level of quality care with less financial resources to do it, and that is certainly a challenge for us,” Harlovic said.

In terms of Medicaid, preliminary estimates call for a $2.5 billion reduction in medical assistance throughout the state.

The Medicaid Redesign Team is taking a look at the system and indicated that it doesn’t want to impact safety net providers, which would include Oswego Health due to its status as a sole community hospital.

“They may actually redistribute some of that money in this redesign where we are kept flat and whole at our level,” said Harlovic, noting it is to be determined what the impact will be and what services and resource will be cut.

He said if it were a $2.5 billion cut, Oswego Health would experience approximately a $3 million to $4 million cut in revenue for the services it offers.

“It would be an extreme hardship on us and we would have a lot of decisions that we would have to make to go on,” said Harlovic, noting that he recently joined Coakley in lobbying efforts in Albany with local representatives that include Assembly Minority Leader Will Barclay (R-Pulaski) and Senator Patty Ritchie (R-Oswegatchie).

In terms of possible cuts, Harlovic said that would be a “game time decision” if that were to come to fruition.

Harlovic said “there are just too many people coming on the rolls, and that’s why Medicaid is so expensive.”

Changing eligibility requirements may be necessary to curb the number of people on Medicaid. “They are going to consume and costs will rise,” he said.

He addressed how Oswego Health compensates for that possible funding gap.

“We are efficiency experts and monitor our staffing every four hours and adjust according to the volume we are seeing,” he said.

In terms of its supply chain, Oswego Health seeks to get the best deals and contracts possible, he added.

Micheal Stephens, a practicing family physician as well as associate chief medical officer at Oswego Health, said among the challenges is practicing “great antibiotic stewardship” by using the best antibiotics at the right time.

Stephens said it is essential to have “a great lab that identifies cultures quickly” and the need to not overuse antibiotics.

In terms of the ongoing opioid crisis, Tull said his surgical team is focused on the post-operative use of narcotic-based medications.

“We are watching and following national guidelines in limiting those numbers,” Tull said. “Most people used to get a bottle of pain killers following a surgery. National studies are saying most people throw those bottles away.”

Tull said his team is now dispersing seven to 10 pills rather than an entire bottle of painkillers.

“Patients were throwing out prescriptions, and also allowing them to be diverted. But by not putting them out on the street, we are avoiding that diversion,” Tull said.

Oswego Health also features a drug collection box that is placed outside the emergency department. It allows people to surrender any drugs they are not using to avoid diversion as well.

Tull said to gauge the program’s success, follow-ups are held with patients to determine how much prescribed opioid-based painkillers were actually used or not used.

“We’ve been able to demonstrate that these lower numbers in terms of pills prescribed are more realistic than what we have been doing in the past,” he said.

Coakley said one of the most urgent challenges most rural community hospitals face is both retaining and recruiting high-quality physicians on the medical staff.

“There is a significant amount of effort that all of us put in at really presenting our community and colleagues on the medical staff to other physicians and advanced care providers that could support our patients’ care here in the community,” he said. “That is probably the greatest challenge that most community hospitals are facing.”

Coakley said Oswego Health has been fortunate to welcome many new physicians over the last five years to the medical staff and is continuing to do that.

For instance, the orthopedic department was recently enhanced with the addition of physicians Michael Diaz and John Ayres, who will be introducing another physician, Kamajeet Banga, in May.

“Having three full-time employed orthopedic surgeons is fantastic for a community our size,” Coakley said.

“We really concentrate on the importance of the medical staff by listening to them and helping them make sure they continue to find this the place they want to stay, raise a family and continue to practice medicine in the future,” he added.

Harlovic said when recruiting, Oswego Health focuses on the success of the community.

Besides highlighting the city, recruiters also indicate such resources as SUNY Oswego and other large employers such as Exelon Generation and Novelis.

Oswego Health also tours candidates around the lakefront community while highlighting all of its community partners.

“We talk them up, and we believe they are doing the same for us when they are recruiting. As we all work together to support the community, we are all better off,” Harlovic added.

Stephens said there is a trend in primary care that sees mid-level practitioners playing more of a role in community medicine.

“That is true especially as family physicians tend to move out of the hospital and no longer do as many admissions,” said Stephens, noting that transition has been unfolding over the last seven to 10 years.

“There is a bigger push for nurse practitioners and mid-levels to be part of the primary care team and they are a welcome asset,” Stephens said.

He said mid-level practitioners have a vastly different set of skills compared to physicians.

“We have a lot of NPs in primary care and they are extremely valuable to us,” Stephens said. “There is a patient base that looks to see an NP over a physician.”

“There are some patients who prefer to see nurse practitioners who may spend a little more time with them,” he said.

Stephens added that they also fill a gap left by the primary care physician shortage, which is how both NPs and PAs have risen in popularity.

“There are NPs and PAs that help fill that void especially in an area where it’s hard to recruit family physicians,” he noted.

Tull noted in the area of cardiology, Oswego Health has been able to shore up that department with three PAs working with one cardiologist to sustain a practice that is in high demand.

“There are quite a few patients that call physician assistants ‘doctors’, because to them, they are the exact same as cardiologists,” said Tull, noting mid-level practitioners are known as “physician extenders.”

Challenging specialties to fill have been in the areas of psychiatry, dermatology and nephrology, Coakley said.

“In those particular areas, for us it’s about building relationships with those who can help come and join us to support that patient care or make those relationships to get patients in a reasonable distance to those providers,” he added.

“It’s an entirely different environment when you have the organization actually trying to bring you in. You actually get more of the truth, more the reality of the area, as opposed to somebody working on a commission to get you to take the job so they can make their money. Having an in-house recruiter is definitely a benefit,” Tull added.