Fulton business celebrates a half century of doing business

A lot of things have changed in Fulton over the last 50 years. Woolworth’s is gone. Goldberg’s is gone. Nestle is gone. Miller Brewing is gone. Sealright is now Huhtamaki.

However, there has been one constant business.

Gosch Supply, located at 303 S. Second St., has weathered the decades of change and is the largest lighting showroom in Oswego County.

The company is celebrating its 50th anniversary this year.

Gosch Supply was founded in 1972 by Douglas Gosch in a small converted house on South Second Street adjacent to the current location. The business moved to the corner of routes 3 and 481, formerly the Sorbello automobile dealership, in 1976.

Garry Stanard joined the company in 1973. He purchased the business in 1986 after having served as the manager for 13 years.

“The original store was south of our current location, actually next door. It was in the middle of the block,” he recalled. “Part of our building was a Jreck sub shop. They had half of this building.

“We took over that part of the building and made a larger showroom, showcasing Shonbek crystals which really sparkle and shine beautifully in the windows in the evening hours. We added on a new garage for extra storage for our wire reels and other merchandise.

“For myself, it will be 49 years in June,” Stanard said. “A dollar eighty-five was minimum wage when I started here back in 1973, right after high school.” 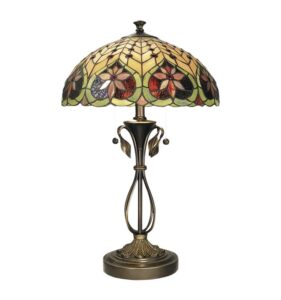 Connie Stanard joined her husband as the co-owner in 1987.

They usually don’t talk business at home, he noted.

“We’re proud to have reached this milestone,” Garry said. “We hope to serve our customers for many more years.”

They have served many repeat customers, he added. “We have had loyal customers over the years. That’s helped us to succeed.”

“We’re in a unique business. We have a lot of things that other places don’t sell. We carry a lot of parts for repairs and of course the general electric supply items. We have light bulbs, anywhere from a miniature lamp to a large lamp and if we don’t have it, we can get it,” he said.

Gosch Supply serves retail customers, local contractors, municipalities, schools and industry with many types of lighting and electrical supplies. The wide range of products include everything from light bulbs, lamps, shades to wire, conduit, switches, ballast, panels and generators.

“We have dealt with municipalities, school systems, fire departments and local industries. As an example, we’ve done some stuff at the Oswego County Airport, too. “We work with them; they have a lot of lighting out there,” he pointed out.

The showroom at Gosch Supply is jam-packed with indoor as well as outdoor lights, fans, cables, myriad light bulbs and much more.

‘We went from incandescent lighting to mercury vapor lighting to high-pressure sodium lighting and now LED lighting. That changed so fast the first few years that we could not keep up. We had a hard time keeping up. Now it’s leveled off,’

“We also stock an extensive line of electrician’s tools,” Stanard said. “We also feature a specialty lighting room with recessed and track lighting to allow even greater selection to our customers. We want to make our customers feel comfortable, welcome and totally at home when they visit us.”

Gosch Supply has done a lot of residential as well as commercial projects, he added. 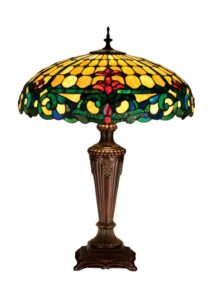 Gosch Supply has thrived with just a small staff.

“Right now there are three [people working here]. We are busy, it could be busier but… times are tough right now,” Stanard said.

The business has seen a lot of changes over the course of five decades.

“We went from incandescent lighting to mercury vapor lighting to high-pressure sodium lighting and now LED lighting. That changed so fast the first few years that we could not keep up. We had a hard time keeping up with the changes. Now it’s leveled off,” he said. “But there is still a new product that comes out, probably monthly now. In the beginning it was tough. But we learned it; learned it well.”

Everything slowed down during the pandemic, he said, adding; “We were still open because we were considered ‘essential.’ Now, it is like a rollercoaster. One day you are very busy and one day you are not,” he said. “Our January started out very good. February was very slow. I think it is partially the way the economy is going. With the gas prices the way they are, it is not going to help anybody’s business.”

When the weather improves, so does business.

“When the sun shines, we are busy,” he said. “It helps. I think people just like to get out and do things.” 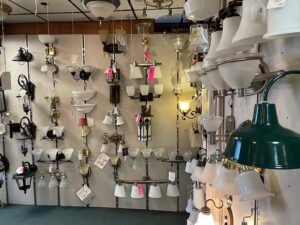 They just took on some more modern light fixtures.

“They just came in. We put one in the window a couple days ago,” Stanard said in early March. “We had a phone call—somebody called and inquired about it. When you get some new product in and put it in the window so people can see it, they call you. Many people have stated they don’t mind waiting for the traffic light at this corner as they enjoy looking at all the colorful Tiffanies and other lighting in our windows.”

“We haven’t really made any plans to mark the milestone. Maybe something a bit later on,” he said. “We’ve got all year.”

Stanard said he has thought about slowing down, perhaps even retiring some day. Just not right now, he said. “I’m here for the long run. The business was started back in 1972; I came here right out of high school. It has been an adventure that I have enjoyed and still do.” ❖

The Struggle to Find Willing Workers