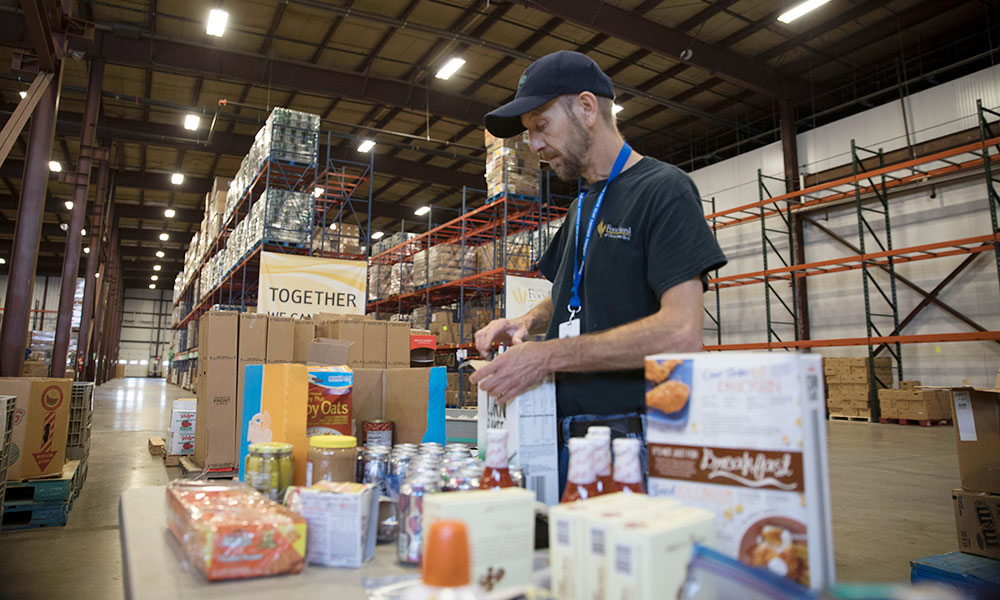 A worker sorts types of food in the Food Bank of Central New York’s warehouse in Syracuse. Photo provided.

“There are still quite a few people who’ve been left behind as the economy has been doing well. Folks may have a job, or multiple jobs, but they’re still struggling to make ends meet. A large number of the people who seek assistance in our area are actually employed, they just can’t make ends meet.”

The Food Bank of Central New York is the region’s primary source of food for charitable organizations. Founded in 1985, it is considered one of the country’s most efficient food banks, with an average expense of about $1 for every three meals provided.

In the 2017-2018 fiscal year, which ended in June 2018, the Food Bank disbursed over 12 million meals to their partner agencies. This past fiscal year saw an increase to that number, about 13 million meals distributed.

The main driver of this increase is the ongoing trade war with China and the routing of food meant for export back into the domestic supply chain, according to Becky Lare, director of government relations for the Food Bank.

Through “The Emergency Food Assistance Program,” or TEFAP, which is run by the Department of Agriculture, food is routed into food banks and other charitable organizations throughout the country. There are three categories for food received from the program: mandatory commodities, bonus commodities and the Trade Mitigation program.

Mandatory commodities are legally required donations made to food banks and charities, organized by the USDA. Bonus commodity donations are decided on by the Secretary of Agriculture and are used as a way to balance out agricultural markets when too much of something has been produced and cannot all be put into the wider market. The Trade Mitigation program is employed when food stocks that would normally be exported to other countries are no longer able to be exported, due to political or economic reasons.

In recent months, as a result of the escalating trade war with China, a large amount of food that would normally be sent to China has been routed to charitable organizations through the Trade Mitigation program.

“We are receiving a significant increase in commodities coming to the Food Bank, and everything that we receive through the TEFAP programs is wonderful product,” Lare said. “I’m pretty confident in saying that increase can be attributed to the trade mitigation program.”

The Food Bank operates as a procurer and distributor of food to charitable organizations around the region. Food is received through government contracts, wholesale purchases or large-scale donations.

“Those three streams of food are coming into the Food Bank, we’ve got a warehouse located in Syracuse and we have a fleet of tractor trailers,” Lare said. “Our primary distribution network is our partnered agencies, those are your local food pantries, your local soup kitchens and shelters.”

The Food Bank also provides food to non-emergency programs, like senior centers and daycares. One of the requirements to become a partner organization is that the organization must be a registered nonprofit. According to executive director Kathleen Stress, the Food Bank partners with over 400 programs across an 11-county region in Central New York.

Lare says that while the economy has recovered from the 2008 recession, there is still significant need in the region. According to Stress, the Food Bank has seen a steady increase in the number of people needing assistance since the recession, although the Food Bank has continually had the resources required to meet that demand.

“There are still quite a few people who’ve been left behind as the economy has been doing well,” Lare said. “Folks may have a job, or multiple jobs, but they’re still struggling to make ends meet. A large number of the people who seek assistance in our area are actually employed, they just can’t make ends meet.”

Another group of people that often relies on food assistance is seniors. Lare said that social security payments and retirement savings do not always sustain the seniors that rely on them. If an unexpected expense comes in, like a medical bill or a car repair bill, the result can be a crisis.

As the future looms, Lare said a concern is the return of a recession. As the economy tends to cycle, and economics experts have started to show some worry, Lare said that the Food Bank has still not yet reached their pre-2008 levels for distribution. It means the Food Bank has less food to give to peope it serves. That’s  especially true in areas of Central New York that rely heavily on one or two industries — the need for food assistance in a community can skyrocket in a relatively short amount of time if the economy should turn and local employers close down.

Another worry is possible federal changes to aid programs like SNAP (formerly known as the Food Stamp Program). Lare said that when the SNAP program changes in a way that reduces the amount of people who are eligible, the result is increased reliance on food assistance charities. The USDA changed SNAP rules three times in 2019, and the most recent change in October has the potential to take benefits from an estimated 8,000 families. The other two adjustments to the program made in 2019 are expected to cut off almost 4 million people off from SNAP benefits if they are enacted without adjustments.

Stress said that she is thankful that the Food Bank has been successfully feeding needy Central New Yorkers for years, but the need for food assistance in the region is just as strong as ever.