Over a decade it has evolved from a fledgling startup to become a major ‘catalyst for change’ in Oswego County.

Longtime SUNY Oswego chemistry professor Richard “Dick” Shineman made a bequest of more than $20 million for a foundation that would broadly benefit Central New York and specifically Oswego County.

When he died in 2010, Barbara, his wife of 37 years, was determined to honor his wishes. Her background, however, was in education, not philanthropy, and she spent more than a year speaking with attorneys, consultants and advisers to understand the process of establishing a foundation and map a path forward.

Karen Goetz — who became one of the foundation’s original board members and later its executive director — remembers that when the four-person board met for the first time in January 2013 none of them knew much about charitable foundations.

“All of us on the board were new,” she said. “We all sat around the table and said ‘Wow here we are. Now what are we going to do?’”

The foundation also made a naming gift to SUNY Oswego in 2012: $4 million over 10 years, supplemented by a $1 million gift from Barbara, for the Richard S. Shineman Center for Science, Engineering and Innovation.

“I really think the foundation has embraced being a catalyst for change,” said Kathy Fenlon, board chairwoman. “And I look at many of the projects that we’ve funded and they simply would not have happened without the Shineman funding.”

She cited support for the Children’s Museum of Oswego and the Oswego Renaissance Association’s beautification efforts as two of many examples.

Richard Shineman grew up in Canajoharie and studied chemistry at Cornell University. He served in the Army and later earned a master’s from Syracuse University and a doctorate at Ohio State. He taught at Purdue University before being hired in 1962 to serve as the first chairman of the chemistry department at Oswego. He retired in 1988, but remained active in the community.

Barbara Palmer Shineman was also a professor at Oswego, teaching elementary education and starting the college’s former laboratory for teachers in training. Her first husband died suddenly when she was in her early 40s and she never saw herself remarrying or even dating until she and Richard Shineman met.

Richard Shineman’s wealth came from his father’s Beech-Nut baby food and chewing gum fortune. His father retired as chairman of the board in the 1950s.

Despite the wealth that came with his inheritance, Richard Shineman continued to live a relatively humble life. But he had developed philanthropic instincts early on — perhaps from his father, who was very generous in the Canajoharie area — and was supportive of charitable causes his entire life, said Jeff Rea, author of “The Shineman Legacy: The Founder Speaks.”

“He was giving to things even before he had a fortune to give,” Rea said.

Barbara Shineman shared her husband’s passion for philanthropy and was determined to honor his wishes and his memory, said Rea, who spent more than a year researching and writing the book, which chronicles the couple’s lives and the establishment of the foundation.

“After Dick’s death and a period of mourning it started to really gnaw at her that she needed to do something about this magnificent bequest,” Rea said.

Richard Shineman had provided the money — about $25 million by the time it was rolled into the foundation — and specified five or six diverse areas of interest, but the details needed to be hammered out.

Barbara Shineman began working on establishing the foundation, reached out to experts and friends and gradually brought a team together.

Goetz, who retired as the foundation’s executive director in September, remembers being shocked when Barbara Shineman asked her to be on the board. Goetz had grown up in Oswego and was friends with her daughter, Kathy. She went to their house often and had been close with Barbara Shineman for decades.

But Goetz quickly pointed out that her background was in business. She was an entrepreneur who had owned two successful startups, but knew almost nothing about philanthropy.

“And she said, ‘Karen I want you to be on the board for two reasons,’” Goetz said. “‘First, I trust you implicitly, and second, because you have experience starting and growing companies. I think that your experience will be invaluable to our startup foundation.’”

Goetz agreed to join the board and promptly gave herself a crash course in philanthropy by attending nonprofit workshops and conferences.

The foundation began accepting grant applications and announced its first round of funding in the spring of 2013. Around that time Fenlon, who was nearing retirement as executive director of the Oswego City-County Youth Bureau, was looking for help with one last long-term project. The Oswego County Nature Park at Camp Zerbe, which is operated by the youth bureau, had a rustic 1940s lodge on the property that was boarded up and in poor condition.

Fenlon spent several years trying to find money to repair and open the long-shuttered lodge. She secured $450,000 in state funding, but still needed $50,000 for the project to go forward.

“And along came the Shineman Foundation,” she said. “I was thrilled.”

The foundation’s original bequest was to benefit the five-county region of Central New York, specifically Oswego County. At the time the foundation was reviewing funding requests from across the region, Fenlon said.

“The board was really still trying to figure out what kinds of things to fund,” she said. “They were really kind of in the figuring out stage.”

The board developed a strategic plan in 2014. They’d learned that many larger foundations were not providing support in Oswego County and decided to narrow their geographic focus

“To go beyond the county would really water down the impact that we could have locally,” Fenlon said.

While the foundation’s geographic focus was narrowed, the board kept a broad focus on the types of projects and programs the foundation would support.

“Because there’s not a lot of funding coming into Oswego County we did not feel we had the luxury of picking just a few different areas that we would fund,” Goetz said.

In 2014, the executive director resigned and the board began searching for a replacement. Goetz said she became hooked on the world of nonprofits and the difference the foundation could make in the community. She also believed her experience starting and growing businesses would be helpful. She was hired in 2014 and set about putting processes and procedures in place to run the foundation like a business.

She also spent considerable time getting to know the nonprofits and people in the community – the foundation was still new to many – and meeting with leaders of other foundations to learn how they operated.

She discovered there were great resources available to nonprofits in Syracuse, such as professional development, but Oswego County nonprofits were for the most part not taking advantage. Many nonprofits asked if the foundation could provide similar support in Oswego.

In 2018, the board was again working on its strategic plan and looking at ways it could grow its impact. Goetz shared what she’d been hearing about requests for professional development.

“We also knew that many of the organizations in Oswego County were not being run in a very business-like mode,” she said. “They wanted and needed help running more effectively and efficiently.”

The board decided it would begin developing a plan to help nonprofits with professional and organizational development. 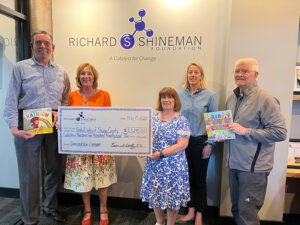 In 2019, the foundation then kicked off its Nonprofit Education & Training (NET) program, which offers seminars and workshops for nonprofit staff and board members seeking tools for professional and organizational development. The series continued virtually through the pandemic. The events bring together representatives from several dozen organizations.

The NET program is part of an effort by the foundation to take a more proactive role in convening organizations to discuss opportunities to collaborate on strategic initiatives to improve Oswego County.

As it celebrates its 10th birthday the foundation is entering a transition period. Barbara Shineman is 94 years old and has taken a less active role, though she remains interested in the foundation’s work. The organization is also welcoming a new executive director. And term limits mean half of the board will be turning over in January.

But the foundation’s work will go ahead unimpeded. Its investment portfolio has grown to $33 million even with its philanthropic support over the last decade. And Goetz said it’s proven itself more than capable of meeting the changing needs of the community.

“I feel the foundation is poised to keep growing and evolving,” she said.