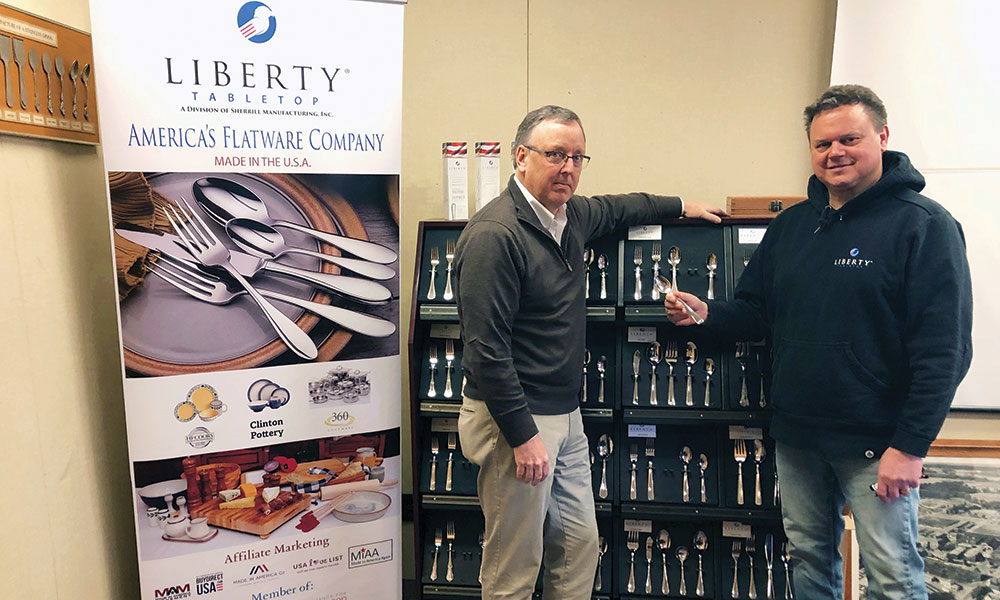 Greg Owens and Matt Roberts, the owners of Sherrill Manufacturing.

Matthew Roberts sat in his office at Oneida Ltd.’s sprawling factory in Sherrill, Oneida County, reflecting on everything about to be lost and stubbornly weighing his options.

What followed was a 16-year quest, often perilous and desperate, to save a slice of this community’s industrial legacy, build up a company and continue manufacturing the last flatware made in America.

Oneida, once the world’s largest flatware maker, began in Sherrill in the 19th century. At one time 2,000 employees churned out more than 3 million pieces of shining flatware a week. Even the city’s nickname — The Silver City — paid homage to Oneida’s connection to the community.

Roberts grew up in Sherrill and came to work for Oneida as an engineer in 1991, eventually becoming a vice president. But by the early 2000s, the growth of cheaper flatware made overseas, particularly in China, dealt a fatal blow to Oneida’s domestic operations.

During a meeting with the CEO and CFO, Roberts learned Oneida would eventually wind down operations and close the Sherrill factory.

In 2004, the company officially announced plans to shutter the plant and move its remaining manufacturing overseas.

“I was actually running the factory when we had to close it, so I had the fun job of laying off everyone and slowly shutting the factory down,” Roberts said. “It was horrible.”

Roberts blamed Oneida’s decline largely on China’s practice of currency manipulation as well as its abundant supply of ultra-cheap labor, lax environmental regulations and virtually nonexistent labor laws. So lopsided was the competition that a fork or knife made in China and shipped to the United States cost less than the raw steel for a domestically produced piece of flatware.

As the clock ticked down, Roberts spent several months formulating a plan. He knew the community, the factory and the business. Oneida’s plant was a highly automated and technologically advanced flatware factory, Roberts said.

He knew they were fairly competitive in certain niche areas, such as midrange and higher end flatware.

“I thought there was a business here if you stripped away all the legacy costs that Oneida had to deal with” he said.

Even free of the legacy costs — the pensions, high pay and six weeks paid vacation — and operating on a much smaller scale, it was still a risky proposition. No one else had even expressed interest in buying the factory. And Roberts possessed little sales and marketing experience.

So, he turned to Greg Owens, a friend and fellow Oneida executive. The pair had become friends during a stint at one of Oneida’s plants in Mexico.

“I called him up and I said ‘Greg I got this crazy idea,’” Roberts said. “Let’s buy the factory.”

The two men would be equal partners. They planned to lease the space they didn’t use, manufacture flatware for Oneida and eventually develop their own brand for retail. With no one else interested in buying the 90-acre plant and its million square feet of space, they negotiated a deal with Oneida and signed the paperwork on Feb. 16, 2005.

“So, ironically that was my wife’s birthday,” Roberts said. “So, I came home and I said, ‘Alice happy birthday, I just bought you a factory.’”

The next day they started Sherrill Manufacturing.

They hand-picked 150 workers and went into business. In order to make ends meet as they got started, Sherrill Manufacturing made flatware for Oneida as the company slowly outsourced its production. Sherrill also did contract work for the General Services Administration, Cutco Cutlery and a handful of high-end designers.

The work for Oneida eventually disappeared after the company filed for bankruptcy in 2006, but Sherrill managed to remain in business.

At that point, Sherrill Manufacturing was a $5 million company surviving on razor-thin margins. In spite of the lost business from Oneida, Roberts and Owens invested $750,000 in tooling for their own line of flatware designs, which they considered key to developing a competitive flatware brand and surviving long-term.

“And then in 2008 the economy stopped,” Roberts said. “Companies that were buying from us had all this inventory and no sales.”

With the Great Recession bearing down, months went by without new orders. When customers did begin buying flatware again it was a fraction of their previous orders. Sherrill limped along a couple more years until filing for bankruptcy in October 2010.

Before shuttering the plant, Roberts and Owens did one last production run using the remaining steel. The $50,000 worth of flatware was a pittance of what the factory was capable of producing, but it was enough inventory to create a possible lifeline. The idea was that if they could sort things out with their creditors, they might be able to sell their flatware directly to consumers online.

Despite his 14-year run with Oneida, Roberts had never experienced the bankruptcy process firsthand and possessed a bleak view of how it would play out.

“I thought when you declare bankruptcy all of a sudden they show up, they lock the doors, they kick everybody out and you go home and they take your house and they take all your belongings,” Roberts said. “The exact opposite happened.”

As it turned out, their bank wasn’t interested in owning a massive factory and was even less interested in entering the flatware business.

While Roberts struggled to keep the pipes in the plant from freezing, Owens sorted through the financials. They started over, creating a web business to sell the little inventory they had managed to cobble together.

They continued to do some contract work for the military and Cutco Cutlery, which helped keep the lights on. In 2010 they sold $35,000 worth of flatware online and reinvested most of that back into another run of flatware. The plant, which was capable of making millions of pieces of flatware, became a shadow of its former self. Every few months, a handful of part-time employees trickled back to produce about 10,000 pieces of flatware to be sold online.

But Roberts said their online sales gave them a chance to slowly claw their way back. They named their flatware brand Liberty Tabletop and focused their marketing on the fact that they were the only domestic flatware maker left. If someone wanted to buy flatware made in America, they were the only option.

Business slowly improved. Roberts and Owens auctioned off most of the extra equipment in the plant, including dozens of giant drop presses, which helped Sherrill Manufacturing pay down some of its debts. And in 2013 they sold the 90-acre plant to an investor and leased back a 125,000-square-foot portion to continue making flatware. That allowed Sherrill to pay its secured creditors.

Sherrill Manufacturing’s sales grew from $5 million in 2019 to more than $7 million in 2020. Number of employees jumped from 45 to 68 during the period. The reason? Strong online sales during the pandemic.

In 2014 the company brought in another investor and exited bankruptcy. Roberts said the company has a plan to eventually pay back every creditor.

“There were a lot of times I thought we weren’t going to make it,” Roberts said.

The company has expanded in part by aggressively marketing its Liberty Tabletop brand. Even its raw material is sourced domestically, making it the poster child for buying products that are made in America.

“So, the steel you’re eating off of was made in Pittsburgh, Tennessee or Alabama,” Roberts said.

The company eschews harmful chemicals in its manufacturing process and sources its packaging materials from a family-owned company in Earlville, on the border of Madison and Chenango counties. Its buffing compounds come from Utica and Detroit.

Online retail has been the great equalizer for Sherrill, Roberts said. It has allowed them to be more competitive with other high-end flatware brands and to cut out the expensive markups that come with selling through traditional retailers.

In addition to positioning Sherrill Manufacturing as the only true American flatware maker still in business, Roberts and Owens stumbled upon another idea that has helped give them an edge in the online retail space. It was five or six years ago when a couple employees came to them with an idea to design a zombie-inspired pattern of flatware featuring skulls. The employees reasoned that customers would be drawn to the unique pattern. Roberts and Owens listened patiently, but were skeptical.

“As soon as they left the room we said, ‘What’s wrong with them?’” he said.

Flatware designs were typically very traditional. And Roberts knew from market research that the average person is likely to buy flatware just three times in their lifetime. He struggled to imagine one of those times being such an unusual pattern.

The employees were persistent and eventually got Roberts and Owens to agree to a small run of 1,000 pieces of flatware featuring skulls on the handles. Roberts assumed this niche flatware would collect dust for years.

To his surprise, with the help of marketing on social media, the skull line sold out in two months.

That was the first of a series of so-called affinity lines that have proven immensely popular thanks to social media.

After the skull design, which is currently one of Liberty Tabletop’s bestsellers, they added other nontraditional designs: Celtic, Woodstock, Flames, Holidays. In October, they added a Honey Bee pattern that features bees and honeycomb along the handle. It was proven so popular that they can’t keep it in stock.

“We’ve taken a product that you buy because you need it and turned it into an impulse buy,” Roberts said.

“But having these affinity designs changes the game because someone is going to buy something because they think it’s cool,” Roberts said.

When the pandemic hit in the spring of 2020, Sherrill initially closed down its plant. It turned out that the manufacturer was considered an essential business because it makes products for the government, Roberts said, so the factory continued operating on a smaller scale to meet government contracts. When the hospital ship USS Comfort prepared to sail to help fight the coronavirus, for example, they placed a huge order with Sherrill to stock up on flatware.

About a month after the pandemic caused widespread shutdowns, Roberts said there was an unexpected uptick in the company’s online sales.

Roberts believes consumers stuck at home were looking for ways to spruce things up and turned to online shopping. And widespread supply issues, particularly with Chinese imports, likely nudged people to seek out American made products, he said.

The company used the inventory they had to fill orders until they were able to bring production back to full strength, which allowed them to recover from the period when the factory was idled.

As perilous as the first part of 2020 was for the company, Roberts said Sherrill Manufacturing’s sales grew from $5 million in 2019 to more than $7 million in 2020. The fourth quarter of 2020 was the company’s best ever. And its workforce grew from 45 to 68 employees, mostly by adding factory workers to keep up with production needs.

“We actually are in the opposite predicament that most people would think,” Roberts said. “We are having a difficult time keeping up with demand.”

The company’s success thus far has been due to its dedicated workers, a lot of hard work and a good amount of luck, Roberts explained. He wants to continue growing Sherrill Manufacturing, but sees the effort as much more than a simple business.

“It’s a cause,” he said. “Manufacturing needs to be one of the cylinders in the economic engine of the United States.”