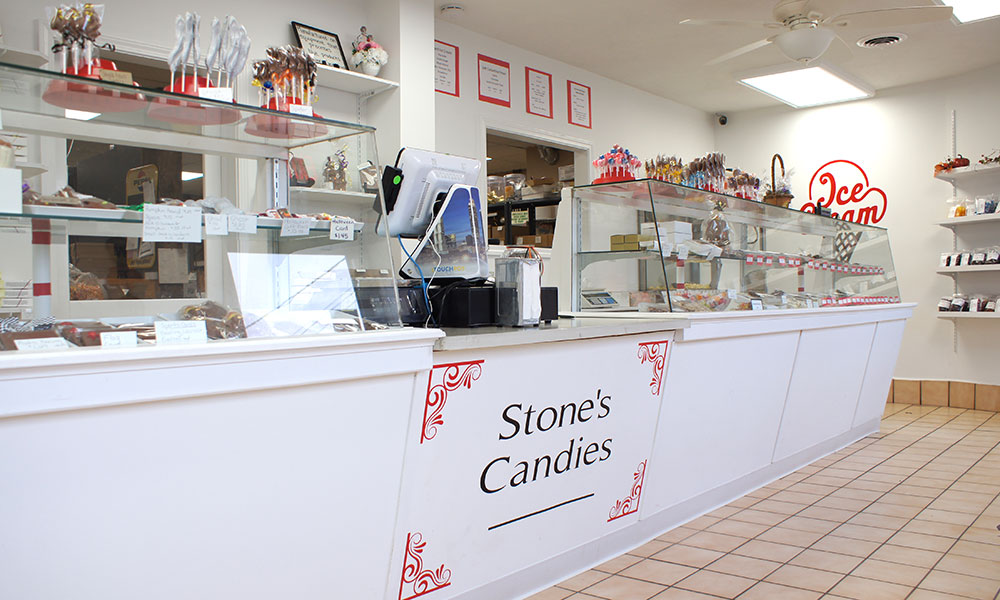 Under new, restructured ownership and a brand-new building, traditional chocolate shop reopens on west side of Port City

Stone’s Homemade Candy Shop is back and ready to keep growing, after moving to a new location in downtown Oswego.

In January, three local men bought into the business alongside longtime owner Don Regan. Bill Galloway, a local real estate agent; Jeff McCrobie, a former Oswego fire chief; and Diego Lebaudy, a local lawyer, all became equal partners with Regan, and began the process of expanding the business model and looking for ways to improve.

The shop, which has been an Oswego staple since the early 1970s, moved from its old West Bridge Street location, to 23 W. Seneca St. in September.

According to Galloway, the move was done mainly to put the storefront in closer proximity to downtown Oswego, as well as to facilitate further growth. One of the first major changes coming with the new location is an expanded platform for shipping Stone’s products nationwide.

“We expanded the business side of things,” said Galloway. “We’re going to be doing more shipping, we have numerous clients around the country who want to order our products.”

Moving a candy shop is not the same as moving other businesses, according to Galloway. Not only do the normal things like furniture, computers and paperwork have to be moved, but the machines used for making the candy have to be moved as well. Galloway said that one of the major concerns for the new building was finding a place that could be climate controlled very specifically, in order to ensure that what the shop is producing remains consistent.

Overall, Galloway said that the total costs of the refresh, including the move, the renovations at the new location and the new hires to handle the increased shipping totaled over $400,000.

Stone’s Homemade Candies is one of only five confectioners to make sponge candy, an Upstate New York specialty with roots in cities like Buffalo, Syracuse and Oswego. The conditions for making the candy have to be similar in order to ensure consistency, said Galloway.

“It was so sad to see that close, and Stone’s was showing some signs that it was going to go the same way,” Galloway said. “I saw that there was a lot of potential to buy it, grow it, and hopefully keep it going another 50 years.”