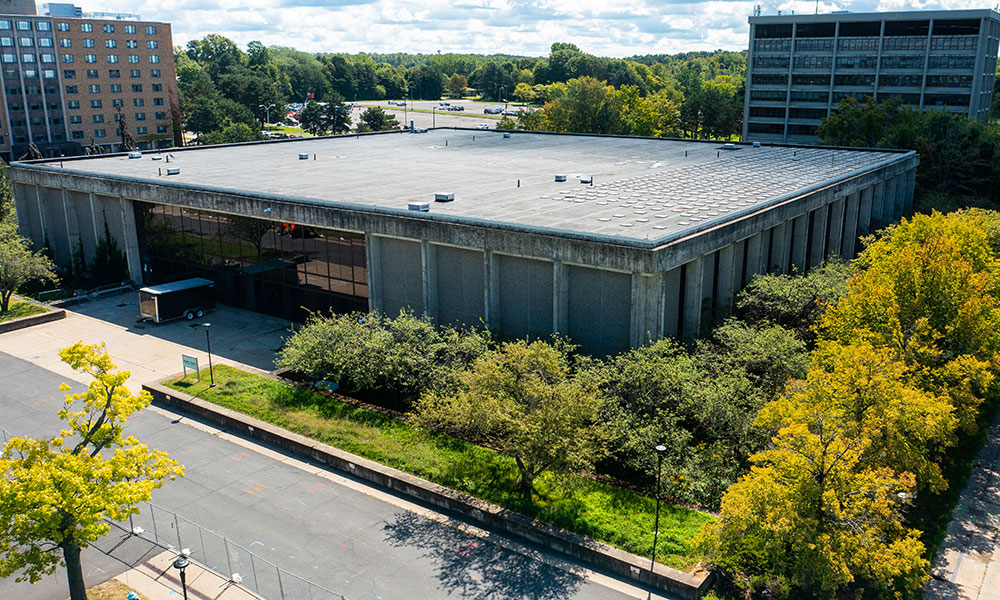 The current Hewitt Union, which has sat partially vacant since the Marano Campus Center opened in 2006.

College to create new home for School of Communication, Media and the Arts. The project is part of a long-term $850 million campus renewal program

SUNY Oswego is launching a $65 million renovation project to transform its old student union building into a nationally competitive hub for its School of Communication, Media and the Arts.

In addition to state-of-the-art facilities and equipment, Provost and Vice President for Academic Affairs Scott Furlong says the building will feature a contemporary design meant to encourage collaboration outside the classroom.

“It will now become in many ways a showcase building for the university,” he said.

Plans call for renovating the former Hewitt Union, located in the middle of campus. The building has sat partially vacant since the Marano Campus Center opened in 2006, taking its place as the student activities center. When renovations finish, the Communication Studies Department — which includes broadcasting, graphic design and cinema and screen studies — will relocate there.

The project is part of a long-term $850 million campus renewal program the college began nearly two decades ago to modernize its aging facilities.

In academia professors are often eager for the newest facilities and state-of-the-art equipment, while administrators are keen to boost the institution’s prestige and wow students with gleaming buildings. In this case, however, college officials say the renovation project is sorely needed.

The Communication Studies Department has long been shoehorned into a labyrinth-like space on the lower level of Lanigan Hall. It’s not simply a matter of not having enough space, said Jessica Reeher, chairwoman of the department. When the building was designed in the 1960s little thought was given to issues such as handicapped accessibility or the need for computer labs and TV studios.

Even with some renovations a little over a decade ago, problems have persisted. For example, Reeher said, one of the main computer labs has a giant column in the middle of the classroom, blocking the view of the front of the room.

“You can only do so much with the space that you’re given and in order to really make the space accommodating you’d have to knock down walls and mess with support structures,” she said.

Previous construction has addressed similar issues with other academic programs. Renovation of Wilbur Hall in 2018 allowed the School of Education to be consolidated into two buildings.

The School of Communication, Media and the Arts — which includes the art, communication studies, Music and Theatre departments – has been scattered across several buildings since it was created in 2008. Renovations of Tyler Hall in 2019 brought the fine and performing arts together. This project will bring the remaining departments in the school together in Hewitt, said Julie Pretzat, dean of the school. She said the new space will address many of the issues programs within her school have had to deal with, particularly communications studies.

“The size of their program does not meet the size of the space that they are in any way shape or form,” Pretzat said. “We are such a signature program in graphic design and in communication studies that it was clear that it was time to give us the kind of space that those departments deserved to highlight them visually, but also create that buzz, create that sense of excitement about creating new things.” 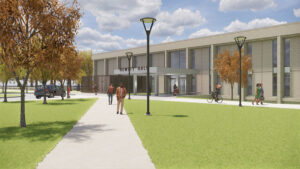 The design for the new 35,000-square-foot Hewitt Hall is based on the desire to open the building up and encourage collaboration between students and faculty from different programs and the larger college community, Pretzat explained.

The first floor will have a high open area with classrooms, faculty offices, a skylight and a prominent television studio suite that includes a newsroom and control room. The ground level will contain most of the other broadcasting, audio and podcast studios and technology spaces. The second floor will focus on graphic design with collaborative workspaces that will resemble a professional environment more than traditional classrooms.
A soaring, updated and airy two-story ballroom will provide a performance space for a range of campus events. The building will offer spaces such as virtual reality studios that address the interdisciplinary nature of advanced visual technology. Hewitt Hall’s other showcase spaces will include a gallery, screening room and the naturally lit collaborative core as a central feature.

The new building will be a warm, inviting, contemporary space where students will want to work together and learn, in and out of class, said broadcasting professor Michael Riecke, who was part of the project planning group. It will also allow students and faculty to be more transparently connected to other programs.

“We now live in a world — we’re not getting there, we’re there — where these disciplines all intersect,” Riecke said. “It’s increasingly important that our students are at the very least aware of the basic fundamentals of each of these disciplines because we overlap so frequently when producing content.”

As an example, Riecke pointed out that a digital news organization today would have graphic designers, writers and video producers working together.

“It’s not that we’re not collaborating now,” he said. “It’s just we really don’t have the space to do that. Our space doesn’t speak to collaboration. The new space will.”

That’s especially true in the case of cinema and screen studies, said Professor Amy Shore, who directs the program.

When Shore helped launch the program more than a decade ago it was tucked into the English department. Moving into closer proximity to the School of Communication, Media and the Arts will allow cinema students to collaborate more easily with other students in disciplines such as writing, acting and sound production, Shore said. 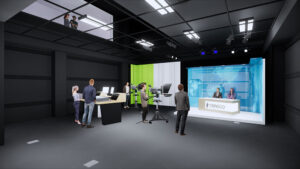 “We’re going to be able to authentically collaborate with each other,” she said. “Hewitt is going to allow people to build a network from the ground up.”

One of the biggest challenges with the Hewitt project was trying to design a space for the needs of faculty and students with the knowledge that rapidly evolving technology is changing many of the disciplines being taught, said Kelly Roe, chair of the art and design department. One need look no further than Hewitt’s planned virtual reality studios, which not long ago would have been nonexistent in a similar building.

“We’re constantly looking at the industry and what’s next,” Roe said.

Riecke said the college’s strategy with the project was to have enough flexibility that spaces could adapt over time to changes in industry. “This will allow us to be more innovative and educate that next generation of content creators.”

The college has tapped CannonDesign of Buffalo as the project’s architect and DiPasquale Construction of Spencerport to do the renovation work. CannonDesign previously worked on the college’s Campus Center and Shineman Center building projects.

Exterior renovations are projected to be completed in 2022. Hewitt Hall is scheduled to reopen in fall 2023, in time for classes.

The project is financed by the State University Construction Fund and will create 439 jobs over the course of construction.

Opening of Amazon Warehouse to Ratchet Up Competition for Workers

Lumber Prices May Go Up Again in the Fall