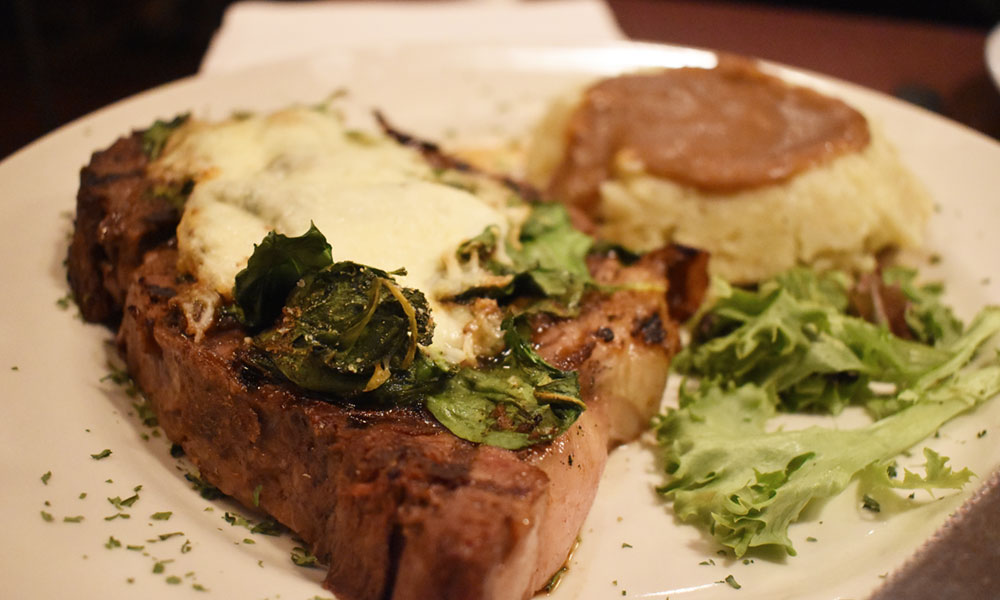 Fillet with asiago cheese and mashed potatoes with gravy on the side ($18.99).

Lock, stock, and many warm plates at this Fulton restaurant

There is something warm about a winter’s walk down to Tavern on the Lock in Fulton. After stepping out of a warm car, walking through slightly falling snow as heated breath plumes rise up, the glow of neon lights beckoning travelers feels like something out of a road trip movie from the late 1970s.

Tavern on the Lock, which is located at 24 S. First St. in Fulton, has a cozy aura and an appeal of a country dining room complete with wallpaper and illustrative décor.

We were immediately placed at one of the booths in the clean-looking dining area with comfy cushions. The utensils in front of us were clean as was the bathroom, albeit looking like something out of a dimly lit roadside motel.

My friend and co-eater Josiah enjoyed a couple of beers each during the entirety of dinner ($6 each, $24 total). We were also bestowed a fresh loaf of bread and butter. The crispy crust was easily cut through and presented a warm, most interior — bread that grandma used to make.

Considering the three starters (bread included) it was clear Tavern on the Lock requires patrons to mentally prepare and don’t be afraid to take away leftovers.

The six bacon-wrapped scallops, plus a crouton-like pinwheel atop greens, had great minimalist plate presence. Tarragon sauce, which was a flavorful standout dripped over the sides of the bacon. Although the bacon was flimsy and easily fell off the scallop, it was enjoyable. The classic finger food was redeemed by the sauce.

The loaded waffle fries lived up to its description. The literal pile of waffle fries was smothered in cheddar cheese and cheddar-jack cheeses. Bacon bits decorated the top. It’s an unhealthy dream that never tasted so good. The highlights were the crispy waffle fries — not one faltered. The issue I had was the cheddar cheese, which was the kind that squirts from nacho cheese machines at fairs and sporting events. Still, without the bagged cheese, the dish probably would have fallen short.

The three entrees ordered were all specials — surf, turf, and coop. The chicken special ($16.99), petite steak ($18.99), and the fried cod and shrimp ($18.99) were dished out for our consumption. Entrees do come with a complimentary salad bar, which we passed on. There’s no opposition to vegetables, but there is an opposition to stagnant open-air vegetables.

The surf plate was more of a low tide. The fried shrimp and cod were haphazardly tossed on a plate, as if a gloved hand just scattered the pieces like rolling dice. The breading wasn’t too much, albeit flavorless and looking like it came out of a box, but the meat was really good and not dry. Green beans came on the side, and those were cooked perfectly.

As requested, the filet came out medium rare. It was flavorful, not over-seasoned, and was not overly fatty. On top of the steak sat greens and asiago cheese. The asiago was mild and accentuated the meat. The mashed potatoes with gravy that came on the side was a perfect complement. The thick gravy pooled atop of the flattened and familiar mashed starch. It was a gravy to be reckoned with.

The chicken was my favorite. The pounded bird breasts were coated with tomatoes, onions and more of the asiago cheese. Three for three, the chicken special wasn’t dry either. The sweet potato fries were crispy, not overly salted, and plentiful.

Tavern on the Lock definitely serves up the comfort food for a variety of ages in a relaxing atmosphere. There are plenty of food options, including choices for vegetarians and vegans as well. In the summer, the restaurant does have covered outdoor seating and looks out over Lock 3. There are also plenty of evenings with live music.

So why not Lock in an outing?