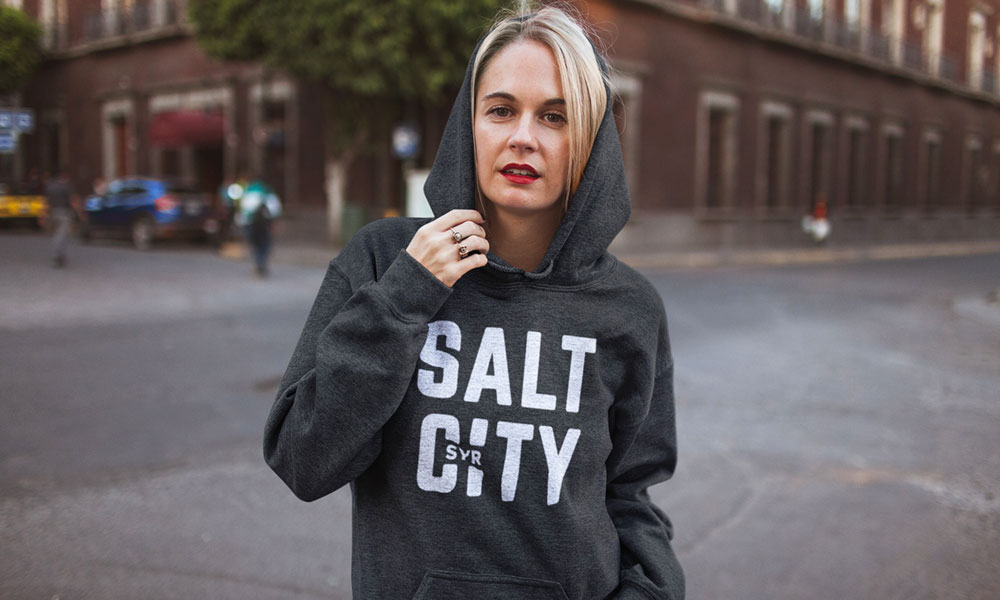 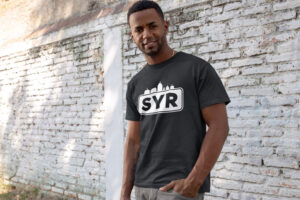 Just before the birth of their baby, Matt and Taylor Sourwine birthed their company, SYR Clothing, which shares their love for the Salt City.

“It was so much work getting it launched before the baby came,” Taylor recalled with a laugh. “The business has struggled to get the attention it deserves.”

Though Matt and Taylor Sourwine did not grow up in Syracuse, they founded a company based on their shared love for the Salt City: SYR Clothing Co. (https://syrclothingco.com).

The sporty apparel and accessories all bear original logos designed by the Sourwines that relate to Syracuse.

The Sourwines grew up in Alexandria Bay, but felt it was a treat to go to Destiny USA — then known as Carousel Center — for shopping trips. After Matt graduated from SUNY Morrisville and Taylor from Syracuse University, they moved to Syracuse and their love for the city only grew.

The Sourwines enjoy traveling and noticed that places they visit have city- promoting apparel; however, their adopted hometown did not. That is why they founded SYR Clothing Co. in November 2019. Like many entrepreneurs, the Sourwines built their company on a shoestring.

Since she was “hugely pregnant” at the time as Taylor put it, she tapped a few friends and cousins to model their clothing for the website.

The couple sells their clothing through their website and on a few local racks such as at Syracha’cuse, a store in Camillus. They view the local presence as a way for shoppers to pick up a last-minute gift. Their items are made on demand by a third-party screen printer because they could not find a local provider.

“We’ve had a great reaction since we launched, though it’s slowed down since COVID,” Matt said. “It’s starting to pick up as people want to support local businesses for the holidays.”

The couple maintains full-time jobs, Taylor as a third-grade teacher for the Syracuse City School District and Matt as a manager of a creative team for Advanced Media New York in Syracuse.

The Sourwines have received orders from customers are far-flung as Hawaii. Matt thinks that it’s likely people with roots in the area.

“It’s our goal to sell something to someone in every state,” he said.

They are considering adding gift items such as mugs and perhaps photos of scenic Syracuse vistas.

It has been a challenge getting their name out, especially considering the ease of ordering items online and receiving them within two days.

“We don’t have a huge budget, but we’ve done a pretty good job considering the amount of time we have in our lives,” Matt said. “It takes time to build a brand. That’s a challenge of any business.”

As a two-person company, the Sourwines can remain nimble and tap trends as they happen. They have touched on COVID-19 in their designs, for example.

“We came out with shirts that say, ‘Spread love, nothing else,’” Taylor said. “We had a lot of orders for that. When SU was having trouble with graffiti we started a line with ‘Stronger Than Graffiti.’”

It takes about a week between the date a customer orders an item and when it is received.

The couple likes to give back to the community. Each month, they donate a portion of each order to a different charity, such as Food Bank of Central New York, Clear Path for Veterans, CNY Community Support Fund, CNY SPCA, On My Team16 and Rescue Mission. For November, it was Salvation Army.

“There are fewer red kettles out there this year,” Matt said.