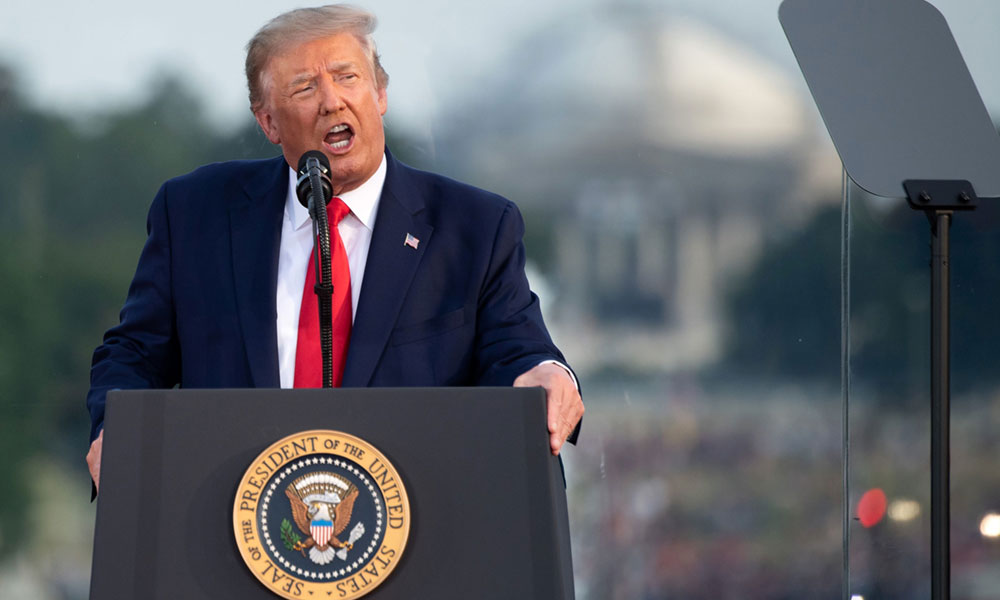 ‘Now that the Trump presidency has come to an end, we are still trying to figure out how this brash, unconventional businessman and TV celebrity caught the attention of so many Americans. How were so many able to overlook his lack of experience, his many flaws in character, morality, ethics, etc.? ‘

I must confess that when Donald Trump announced his candidacy for president and was one of about 17 Republicans vying for the nomination, I thought it was a publicity stunt. I was not alone.

We all expected Trump to milk media attention for millions of dollars of free publicity for his brand, then at some point several months down the road, drop out of contention.

So much for that off-the-rails prediction.

In the midst of all of these experienced politicians was Trump with zero experience in elective office. Not that he needed any. The U.S. Constitution lists these qualifications to be president: He or she must be a natural-born citizen of the United States, be at least 35 years old, and must have been a resident of the United States for 14 years. That’s it. Why, heck, the president doesn’t even need a high school diploma to be eligible to serve.

On top of all of this, Trump’s self-proclaimed genius as the master of the deal sounded somewhat hollow because of his checkered business career where his companies have declared and emerged from bankruptcy six times between 1991 and 2009. He also has been accused of stiffing contractors, hiring illegal immigrants to work on his projects and properties and other business related no-nos.

Through it all, Trump emerged from the gaggle of candidates as the winner and the GOP flag-bearer to go up against Hillary Clinton, who, with her supporters, was elated because they were taking on who they and many in the country thought was her weakest opponent. Democrats were expecting a walk in the park, until it wasn’t.

Many Republicans, even some Democrats, wanted an outsider, someone to “drain the swamp” of the out-of-touch politicians and political corruption and cronyism.

Now that the Trump presidency has come to an end, we are still trying to figure out how this brash, unconventional businessman and TV celebrity caught the attention of so many Americans. How were so many able to overlook his lack of experience, his many flaws in character, morality, ethics, etc.?

Not only did these flaws slide off the Teflon Donald, but some of his supporters have been almost cultlike in their willingness to believe so many lies, most notably that the Democrats and President Joe Biden Jr. had stolen the 2020 election.

This repeated false narrative was partially responsible for an angry mob of Trump supporters marching and sacking the Capitol building on Jan. 6. Trump urged his supporters to go to Washington to “stop the steal.” He whipped up the crowd by saying, “We will never give up; we will never concede.” He then urged them to march to the Capitol and insist that the 535 representatives and senators and his loyal Vice President Mike Pence set aside the election results, which had been officially certified by the legislatures and governors of all 50 states.

Many level-headed Republicans say they are “heartbroken” by these events. During Trump’s tenure, they convinced themselves that Trump’s faults were worth tolerating if it meant furthering the conservative agenda.

They are saddened that Trump’s fulfillment of campaign promises — such as strengthening the military, taking important steps to bring peace to the Middle East, approving tax cuts for many Americans and protecting our southern border from illegal immigration by building a wall, along with other accomplishments — were lost in a matter of minutes in the untenable and self-destructive role of what will be remembered as a sinister day in American history.

These Republicans and Trump were on the same page when it came to such major issues as eliminating regulations stifling businesses, protecting gun rights, freedom of religion, school choice, opposition to abortion and smaller government.

‘Despite tthe Capitol episode that brought allegations of insurrection, sedition and domestic terrorism, Trump has a fiercely loyal base. Again, many of us wonder why? How can they overlook what he has fomented?’

But then came the Capitol episode that brought allegations of insurrection, sedition and domestic terrorism. Despite the aftermath, Trump has a fiercely loyal base. Again, many of us wonder why? How can they overlook what he has fomented?

I happened upon a book written in 1951 by Eric Hoffer called “The True Believer.” Hoffer was an American moral and social philosopher who died in 1983 at the age of 80.

Although written nearly 70 years ago, “The True Believer” describes the Trump phenomenon as closely as any explanation I have seen.

According to Hoffer, The True Believer is a “hitchhiker who thumbs a ride on a cause that he is willing to give his all for. He is a fanatic who needs a messianic-type figure to worship and, if necessary, die for. He is the mortal enemy of things-as-they-are, and he insists on sacrificing himself for a dream impossible to attain. He is today everywhere on the march.”

These movements begin with a desire for change from the discontented who have no confidence in existing culture or traditions. They feel that the power to change is beyond their reach, so they need to ally themselves with other, similarly disaffected people. They become open to the concept of participating in a movement that gives them the option of offering their individual lives to the larger goal.

Leaders are vital in the growth of a mass movement, but for the leader to find any success, the seeds of the mass movement must already exist in people’s hearts, Hoffer said.

And this is where Donald Trump came in. He was able to tap into and give voice to this smoldering frustration that many Americans have in a system that they feel is stacked against them and favors the elite, the connected, the rich and the famous. His battle cry of “Make America Great Again” emphasized not the future but a perpetual battle of what the present has become in their eyes.

Mass movements aggressively promote the use of faith over reason, which gave birth in the Trump administration to rampant misinformation, even conspiratorial theories that projected the Trump agenda forward. Any tactic that furthers the cause — even illegal ones — is fair game.

When Trump urged his followers on Jan. 6 to go to the Capitol to make their voices heard and to take back the “steal,” he gave license to his supporters to do what they had to do to make sure he would stay in office for another four years, even if it meant thumbing their collective noses at the will of the American people and to defy the Constitution which all presidents swear to protect and defend.

Adherents to mass movements must not question the leader’s word under any circumstances. When Trump insisted time after time that he had won the election — “by a lot,” — his followers believed him. A vast number of Republicans still do. The truth is that Biden won both the electoral and popular votes.

To spread and reinforce their doctrines, Hoffer said, mass movements use persuasion, coercion, misinformation, outright lies and misdirection. They don’t admit mistakes, because in their minds there is no such thing.

Successful mass movements don’t need to believe in a god, Hoffer said, but they must believe in a devil. Hatred unifies the true believers, and the ideal devil is someone who is perceived to be the personification of evil, such as the 2016 Democratic nominee, Hillary Clinton and the 2020 opponent, Joe Biden and the Democrats.