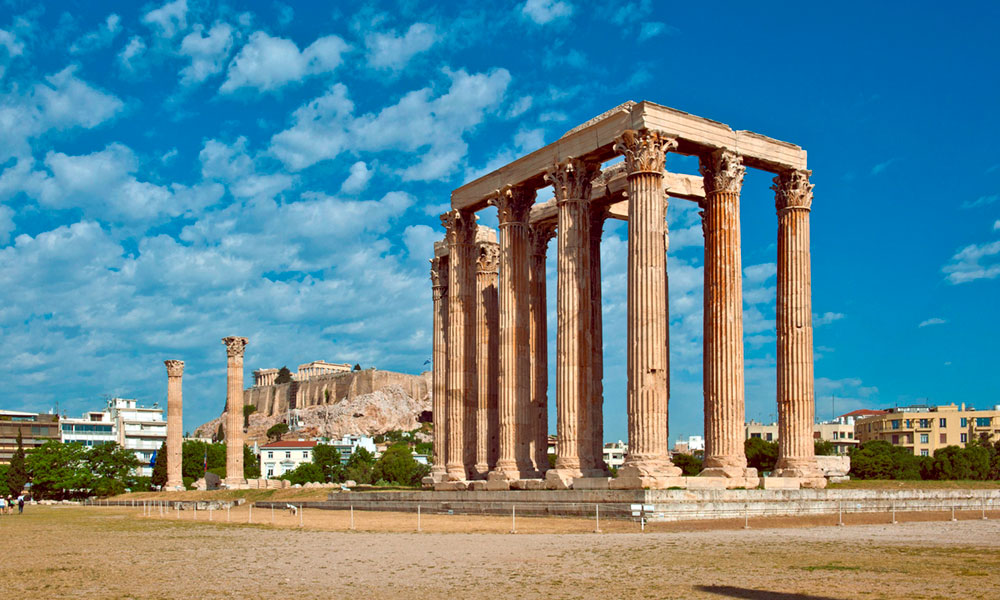 The Temple of Olympian Zeus in Athens, also known as the Olympieion, was built over several centuries starting in 174 BCE and only finally completed by Roman emperor Hadrian in 131 CE.

Discover the roots of Western Civilization, relax on one of the many sun-soaked beaches or island hop in the Aegean and Ionian Seas. Explore Greece, the land of the gods, home to Mount Olympus and 6,000 islands, of which only 227 are inhabited. All travel starts in the capital, Athens, one of first cities in Europe dating back to the 5th century BC — yes, 5th century before Christ.

While in Athens watch the changing of the colorful guards at the Presidential Palace and the Tomb of the Unknown Soldier in Syntagma (Constitution) Square. From Syntagma Square it is walking distance to many of the touristic places plus a shuttle bus to the beach.

The National Gardens is a great place to refresh and pet one of the many cats. The Plaka is a colorful hillside village with cobblestone streets, sidewalk cafes — and great shopping. It is in the shadow of the Acropolis. A hop-on, hop-off bus tour stops at all the must-see places, including the Acropolis, the No. 1 archeological site in Athens. The hardy can climb the many steps up to the hilltop Acropolis; others can take a bus to the Acropolis Museum and then walk up a few steps. There is a chair elevator for the handicapped. There is a fee to visit but some days are free. The Acropolis is home to several archeological sites but the Parthenon is considered one of the most perfect buildings. It is even more amazing considering it was built in the 5th century BCE (before the Common Era).

There are many ways to explore Greece: by tour, by ship or sailboat, or by car. From Athens there are several day tours to the nearby islands of Hydra, Poros and Egina. Exploring the island of Aegina by car will give visitors a look at the tranquil countryside dotted with olive gardens. It is also home to the Oracle of Delphi, a religious sanctuary sacred to the god Apollo. It is where the oracle of Apollo gave cryptic messages to leaders and near the Gulf of Corinth with easy access to Peloponnese, home of Marathon, Sparta and many beaches.

Marathon is where in 490 BCE the outnumbered Athenian army defeated the Persians after which the messenger, Pheidippides, ran 25 miles to Athens announcing that they had won. Marathons are now celebrated in the Olympics and throughout the world. The present city of Sparta is built on the ruins of the ancient city but there are ruins outside of the city. Unique to the time, the ancient city had no protective walls but instead relied on the people to defend the city. Today the word “Spartan” refers to people who exhibit great courage and self-discipline.

There are ferries connecting many of the islands. While it would be nearly impossible to visit them all, Santorini, Mykonos and Crete are the most famous.

The island of Santorini is considered one of the most interesting and beautiful. In the 16th century BCE a massive volcanic eruption followed by others left a crescent shaped island where today towns cling to the cliff above what was once the crater. The white-washed buildings have become the iconic images of Greece. There are amazing views from the village of Oia, located high on a cliff referred to as the “Caldera’s Eyebrow.” It is still possible to see people farming the traditional way with horse-drawn plows. Local farmers raise grapes to make Santorini’s world famous wine. There are several wineries offering tours and tastings.

No visit to Greece would be complete without trying stuffed grape leaves, moussaka, Santorini tomato fritters, Greek salad, gyros and other Greek culinary delights. Not to miss is the baklava.

If it is a party that one is looking for, then Mykonos, an island in the Cyclades group in the Aegean Sea, is the place. Summer is the party time where there are large dance clubs that stay open into the morning. Take a break from partying to check out the picturesque row of 16th-century windmills on the hill above the town of Mykonos. There are places to dine, gleaming white villages, plenty of shops and art galleries featuring local artwork, including mosaics and icons from “The Saint of Mykonos,” the local icon painter gilding his work with 22k gold leaf.

Crete is one of the largest of the Greek islands. At one time it was the center of Minoan civilization that flourished between 3000 BCE and 1450 BCE. It is credited as the first civilization on European soil. The Minoans were famous for their magnificent palaces, specifically the Palace of Knossos outside of the island’s main city, Heraklion. There is shuttle connection between Heraklion and the archeological site. The site is renowned for its colorful frescos depicting life of the Minoans the most famous of which is the restored Charging Bull. Crete may be best known for the Minoan civilization remnants but there are sand beaches and the Ideon Cave in the mountains is considered to be the birthplace of Zeus.

Greece is an affordable place to visit for those who love history and beaches. The locals do not expect visitors to know Greek — English is the most common second language. However, when visiting a foreign country it is good to learn how to say a few words such as “hello,” “please,” and “thank you,” in the local language. Most phones have a translation app. Generally, the people are easy going so keep in mind some rules are merely suggestions. Do not assume that cars will stop at a designated crosswalk to allow walkers to proceed.

Driving is a good way to explore outside of Athens. Most cars are stick shift and an international driver’s license is a good idea. Americans tourists do not need a visa. The euro is the currency and, as always, the best rate is given at a bank’s ATM and the worst is usually at the departure airport. While credit cards use is common, some small shops and restaurants may not accept them. Visa and MasterCard are the easiest to use.