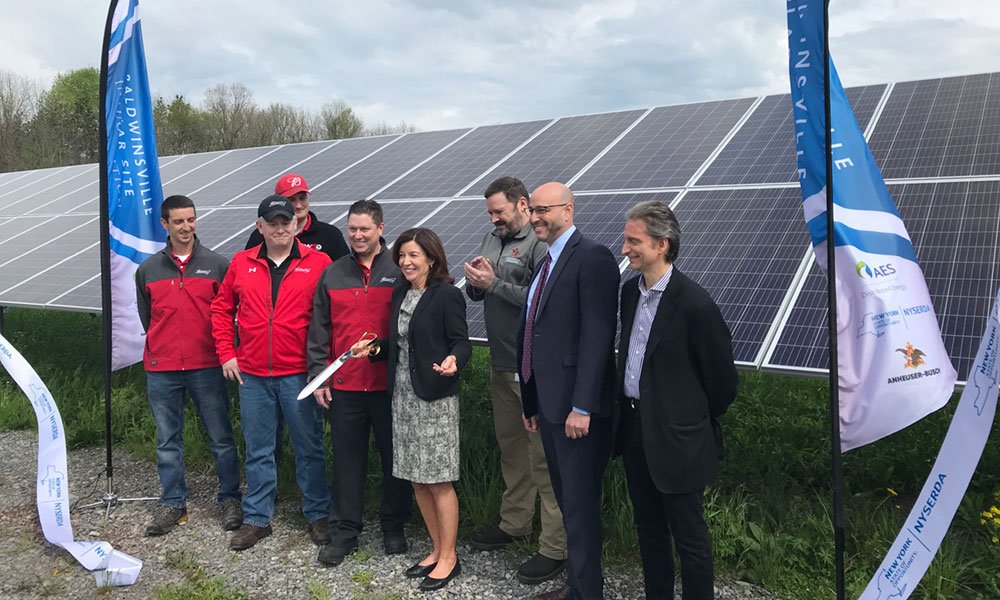 As Budweiser-brewer Anheuser-Busch moves toward the ambitious goal of sourcing 100% of the corporation’s electricity from renewable sources of energy by 2025, Central New York has achieved a unique distinction.

The company’s Baldwinsville brewery is now drawing power from the largest off-site solar installation of any Anheuser-Busch brewery in the country.

The 2.76-megawatt solar project is located on a vacant lot in the town of Van Buren. It boasts more than 8,300 solar panels, which can capture enough sunlight to produce more than 3 million kilowatt-hours each year. That is the equivalent of the power needed to brew 3 million cases of beer annually.

“Across the U.S., our employees are united with a deep passion for brewing beer and an unwavering commitment to supporting the communities we call home,” said Bryan Sullivan, the general manager of the Anheuser-Busch Baldwinsville brewery. “It’s another step toward a cleaner and more sustainable future.”

This is just the latest action the Baldwinsville brewery has taken to cut down on its ecological footprint. Since 2016, the brewery has reduced water usage by 8 %, decreased fuel usage by 6%, and is now drawing electricity from wind power. The addition of the solar panel farm will only provide about 4% of the Baldwinsville Anheuser-Busch brewery’s annual energy usage. But Sullivan says these incremental gains add up and set an important example for other companies to follow.

“As our nation’s leading brewer, we are committed doing our part to protect the environment across the entire supply chain, recognizing our responsibility to lead our industry toward a cleaner environment as well,” Sullivan said.

The solar array is owned and operated by AES Distributed Energy, Inc., a private energy company. The cost of construction was approximately $3 million. New York state chipped in about a third of that with funding from the NY-Sun program, a $1 billion initiative to scale up solar across the state. Since it launched, the NY-Sun program has helped pay for more than 84,000 projects. Of those, 379 were built in Oswego County and 1,044 in Onondaga County. Despite that success, the state agency that houses NY-Sun, New York State Energy Research and Development Authority (NYSERDA), is currently doubling its efforts.

Gov. Andrew Cuomo announced in January that his administration will raise the stakes for its clean energy objectives. Originally, Cuomo set a goal to source 50% of New York’s electricity from renewable sources by 2030. The target now is 70% by 2030. And, the state hopes to now achieve 6,000 megawatts of solar by 2025, up from 3,000 megawatts by 2023.

The announcement of this “Green New Deal” came after President Donald Trump decided to withdraw the U.S. from the Paris Climate Accord, in which the federal government made the commitment to cut the country’s emissions of carbon dioxide and other greenhouse gases. Cuomo and other Democratic governors have since stepped up to shoulder that responsibility.

But David Sandbank, director of Distributed Energy Resources at NYSERDA, says New York won’t be able to meet its share without help from the private sector.

“The state can provide leadership and the vision to be successful, but really we need everyone to participate in our ambitious clean energy goals,” Sandbank said. “When companies like Anheuser-Busch and New York state partner together, we are that much more powerful in combatting climate change. I think more companies need to step up with those types of goals to help us work together.”

According to NYSERDA, virtually all of the systems supported by NY-Sun have leveraged some private investment more than $3.5 billion in all. That buy-in from private partners not only helps the state’s dollars go further, it also helps drive down prices. Sandbank says the solar panel industry grew in New York by 23% from 2017 to 2018, helping bring down the cost of building solar projects by 15% in that same time.

Manuel Perez Dubuc with AES Distributed Energy says that price drop is underway across the country. The cost of building solar projects has fallen 25-30% over the last decade nationwide, Dubuc says, and is now cheaper than some of its fossil fuel counterparts. That is why more companies like Anheuser-Busch are now able to set these lofty clean energy initiatives.

“I have seen more and more companies joining this 100% renewable target,” Dubuc said. “You have 170 companies from the S&P 500 that have publicly announced that they want to convert 100% of the consumption into renewable energy. That’s really, really exciting.”

Sandbank says it’s not only exciting, it’s necessary. The state is counting on this trend to meet its goals by 2030 and sustain the solar market after.

“The whole concept behind the NY-Sun program and our public-private partnership is to get us to a self-sustaining solar industry where incentives from the state are no longer needed,” Sandbank said.