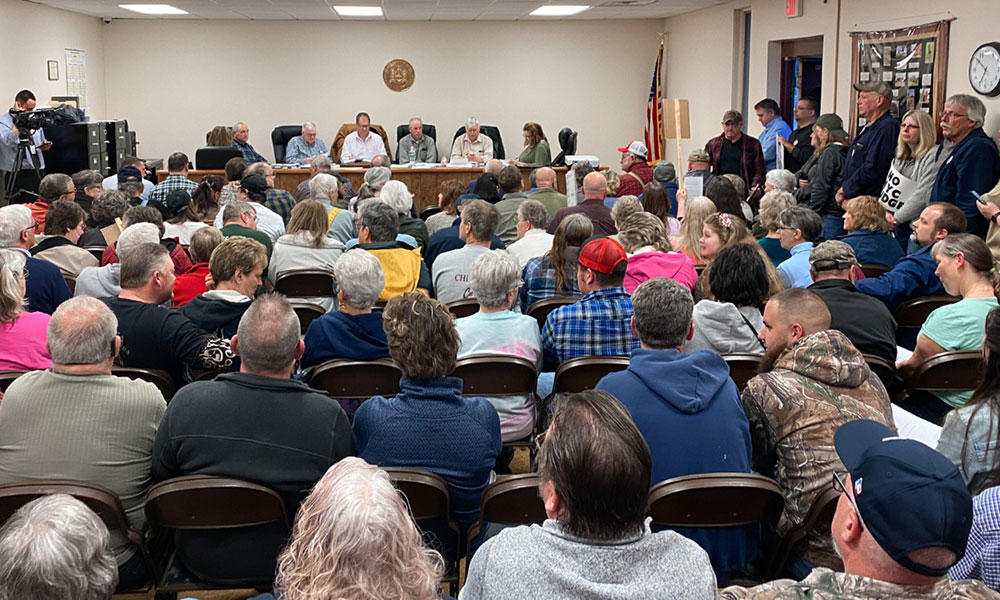 Although the most recent Butler Town Board was not solely about the proposed Butler Composting Facility, local residents interested in the project filled the meeting space to overflowing. Photo courtesy of Shawn Youngman.

Tully Environmental Inc. wants to haul 300 to 350 tons of sewage by truck from New York City to dump in a proposed facility in Butler. It plans to turn it into fertilizer. Local residents are not happy about it

Joe Burnett has operated Burnett Concrete in the Wayne County town of Wolcott for more than two decades as the second generation in the business that his parents founded in 1973.

A new business possibly joining the community has raised Burnett’s concern — and that of other business owners and residents.

Tully Environmental Inc. has pro-posed building a composting facility on a 30-acre former gravel quarry in the town of Butler, owned by Riccelli-Northern, headquartered in Fulton.

Tully plans to treat sewer sludge on the site and offer the treated biosolids as fertilizer. The quarry is less than two miles from Burnett’s home and place of business.

“There is no one I’ve talked to that wants this in Butler,” Burnett said. “I think the drawback economically for the area is a reduction in property values, air quality issues and environmental impact.

“A good portion of my business is in the residential market. We are struggling as it is to attract new development to the area. We really never recovered totally from the housing market crash and this would be another negative impact by introducing a sludge composting business to the area. My business would be impacted negatively because no one would want to move into the area due to the sludge facility and the side effects of the processing and transportation of the material.”

Tom Mettler, who heads the wastewater treatment plant in nearby Wolcott, was able to attend a recent standing-room-only town of Butler board meeting that included details on the proposal. He said that Tully plans to haul 300 to 350 tons of sewage by truck from New York City to dump in the facility, which would include asphalt topped with a concrete container. Once dumped, the materials would be mixed with wood chips.

“The odor from four or five miles away was horrendous,” Mettler said.

He added that the smell and vapors made his wife’s eyes water.

The Butler site borders a dairy farm and neighbors other farms and homes.

Mettler said he met a local man in Tremont who said that in the past he had spread treated biosolids from the Tully facility on fields where he raised corn not meant for human consumption. The man had to stop using it because he found needles in the fertilizer. Mettler wondered about Tully’s ability to remove heavy metal from the sludge.

Peter Spalding, a 28-year Butler resident, and a 12-year commercial composter, said that he has reviewed the proposal and he doesn’t think that Tully’s efforts to compost would work.

“Composting is a managed process of decomposition,” Spalding said. “Certain parameters must be controlled. It is a manufacturing process, starting with a raw material and converting it through physical and biologic methods to an end product bearing little resemblance to the raw material from which it originated.

“If done properly, pathogens are eliminated, heavy metals are bound, pH is neutralized, toxic organic compounds are degraded, odors are minimal, and leachate is contained and returned to the process. Turned windrow for three weeks alone won’t cut it, and in fact, this method is not very effective with biosolids as the substrate.”

He compared it to baking a pie at a high temperature for a few minutes and expecting that it’s ready to eat instead of using the proper temperature for the prescribed time length.

Spalding also doesn’t believe the site is large enough to safely accommodate the amount of waste Tully plans to process on the site. He’s also concerned about runoff, since the site is adjacent to Wolcott Creek, which flows into Lake Ontario.

“Also lacking in the Tully discus-sion is a marketing plan demonstrating where and how that volume of material will be distributed, and what key partnerships will exist to accomplish this,” Spalding said. “What Tully and Riccelli have proposed is not composting. This gives a bad name to composting, and is frankly offensive to those of us who do it correctly.”

He suggested that Tully should keep the sludge closer to its source, New York City.

“Otherwise, what they are suggest-ing is little more than the long-distance hauling to Butler, of New York City sludge in its highest state of toxicity and risk and then to partially treat it and distribute in Central New York,” Spalding said. “That is a flawed and unsupportable proposal.”

Burnett echoed Spalding’s concerns about the site’s likely odor and potential for leaks.

“Those of us already residing in the area could be impacted dramatically in the form of water quality since most households, including my home, are on well water,” Burnett said. “There is a high risk of pollution to the aquifer and the Wolcott Creek that is dangerously close to the site. Another impact that worries residents is air quality, whether it be horrendous odor or actual dust and spores from the process that could produce health risks.”

He said that Tully representatives described the facility as enclosed in a fabric-type of buildings, with water run-off collecting in a concrete effluent tank and vapors directed through a biofilter and misting agents used to mask odors.

“Fabric structures are susceptible to weather wind and damage and easily damaged from construction equipment,” Burnett said. “In December 2018, a sewer sludge composting facility in Auburn, Maine, was closed down due to the biofilter leaking, thus eliminating the ability to remove odor. That tells me there is a lifespan for the equipment and I wonder what would become of the property and how it would or who would be responsible to reclaim the property for an alternate use.

“I don’t like the fact that it is to be constructed in an already environ-mentally risky site. Why anyone would introduce a point source pollution into a gravel pit in close proximity to a creek is beyond me.”

Nancy Kasper, a Butler resident wondered about other areas.

“My immediate concern is if Tully is distributing in other communities material produced by the same incomplete composting process they’ve proposed for Butler, then what the unfortunate recipients are getting is hazardous material,” Kasper said. “What I want to know is, is anyone buying this? Tully brags about donating their product to local municipal properties, but anyone offered this gift horse should be smart and check its teeth before it comes back to bite them.”

In a press release, state Assemblyman Brian Manktelow (R-130 of Lyons) said, “It is very important for those who are concerned about this proposal to stay informed, and to voice their thoughts about this to Butler town officials. I will continue my conversation on the proposal with Supervisor [Da-vid] Spickerman as more information becomes available. I will share any concerns received with him.”

Facebook pages against the project include Sludge-Free Upstate and Butler and Beyond for Sludge-Free Backyards.

As a company policy, Tully Environmental does not respond to requests for interviews about proposals.